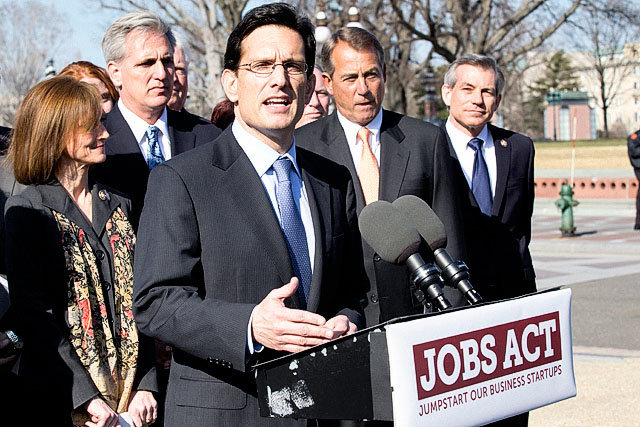 The JOBS (Jumpstart Our Business Startups) Act that passed in the House today contains some big changes for crowdfunding startups. It now moves on to the Senate.

Right now, it’s illegal for a startup to solicit investors on platforms like Twitter or Kickstarter. But the JOBS Act would change that. For startups raising $1 million or less, anyone can now buy up to $10,000 or 10 percent of the annual income (whichever is less) in equity. (Anyone who wants to get in on the ground floor of my bonsai pets business, send your checks to WeWork Midtown, care of VentureBeat.)

One of the principle drivers behind the IPO filings of Facebook and Zynga was the 500-shareholder rule, a vestige of the Securities and Exchange Act of 1934, which said that any company with more than 500 shareholders has to open its financials to the SEC like a public company. But under the JOBS Act, anyone who gives $10,000 or less will not count toward this limit. The act also raises the shareholder limit from 500 to 1,000.

Startups can opt to raise as much as $2 million in this manner; but if they go the crowdfunding route, they will have to provide audited financial statements to their investors. And while raising capital from the crowd is pretty nifty on Kickstarter, it has some drawbacks for startups. Here are some highlights from our FAQ on crowdfunding:

Second, having hundreds of stockholders is an administrative nightmare and will be time consuming and costly. Presumably, each stockholder will be required to execute a subscription agreement and/or stockholders’ agreement to address key issues such as transfer restrictions, rights of first refusal, and drag-along rights. There will also be administrative issues relating to voting and stock transfer issues.

Third, startups will likely have difficulty raising funds from VCs and other sophisticated investors if they have hundreds of unsophisticated stockholders. Needless to say, few sophisticated investors will want to sit on the board of directors of such a company due to the risks of lawsuits relating to director liability, and I would assume D&O liability insurance rates will skyrocket for these companies.

The JOBS Act also makes it easier for small companies to go public by increasing the offering threshold for companies exemepted from SEC regulation from $5 to $50 million on companies. Additional regulations will be phased in over a five-year period for companies that stay under $1 billion in revenue.

This is a huge win for companies like SecondMarket. Companies can now stay private with twice as many investors and go public with a much smaller revenue stream. That will mean big growth in the small and medium cap IPOs that SecondMarket is counting on to replace the revenue it is losing when Facebook goes public.