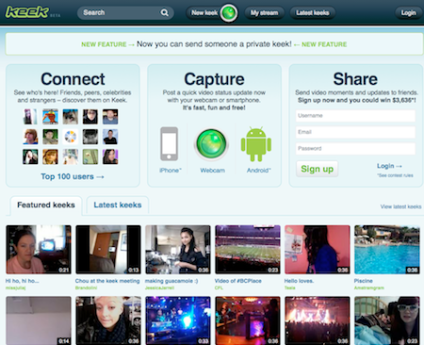 Keek is essentially a Twitter for video updates. Users can update their friends on what they’re up to with 36-second video clips captured with a web cam or Keek’s mobile apps for iOS and Android. Users can then share those short videos (called Keeks) on Keek’s network, as well as on popular social networks such as Facebook and Twitter.

Plenty of startups have tried to go the micro-video blogging route with little success. But unlike similar services such as  TwitVid, 12seconds, Twitvid.io and Twiddeo, Keek isn’t focused on being an extension for a single social network like Twitter.

The startup plans to use the new funding to strengthen its team of employees, develop new features and speed up expansion into international markets, according to Keek.

The funding round was led by AlphaNorth Asset Management and Plazacorp Ventures, with participation from PowerOne Capital Markets Limited.

Founded in 2011, the Toronto, Canada-based Keek has 30 employees, and faces competition from Tout and a handful of other companies.