With resistance to antibiotics growing in the U.S., startups around the world are seeking new ways to target and treat bacteria-associated diseases. One example is Paris-based Eligo Bioscience, which targets the microbiome — made up of microorganisms that live in the gut, vagina, lung, and on the skin. The startup has garnered considerable interest and managed to lock Khosla Ventures in as lead investor in an $18 million round announced today. Returning investor Seventure Partners also joined.

While some bacteria residing in the microbiome are critical to our overall health, others can be the cause of serious conditions, such as inflammatory bowel disease (IBD), colorectal cancer, Type 2 diabetes, depression, and neurodegenerative diseases. Traditionally, there are two ways to target bacteria in the microbiome: probiotics, designed to strengthen and restore the microflora, and antibiotics, which kill the bacteria altogether. In the latter case, however, the antibiotic kills both the “good” and the “bad” bacteria, often inducing unpleasant side effects.

Eligo is developing a biotherapeutics platform to treat bacteria-related diseases through a new strand of drugs it calls “eligobiotics.” The term comes from the Latin word “eligere,” which means to “select” or “choose.”

The startup’s first application targets specific diseases in the gut using the clustered, regularly interspaced, short palindromic repeat (CRISPR) technology and its scissor-like action. The team manufactures nanobots, made of synthetic genetic code and proteins, and programs them to scan the bacterial DNA for the culprit gene. The bots deliver the CRISPR-Cas protein into the “bad” bacteria, effectively cutting its DNA strand and damaging it in an irreversible way.

CRISPR has garnered a lot of attention these past few years because of its efficiency and the relative simplicity with which it cuts DNA at specific sites, notably for gene editing.

But Eligo cofounder and CEO Dr. Xavier Duportet underlines an important distinction. “Our drug does not alter or modify the genetic codes of the bacteria,” he said, in an interview with VentureBeat. “There is no gene editing involved, the CRISPR-Cas system just cuts and damages the bacterial DNA beyond repair, which leads to the bacteria’s death. It is also harmless for human cells since it can only bind to bacteria.”

Duportet and his cofounders, Dr. David Bikard and professors Timothy Lu and Luciano Marraffini, founded Eligo in 2014, drawing upon their respective research from MIT, Rockefeller University, and Institut Pasteur. 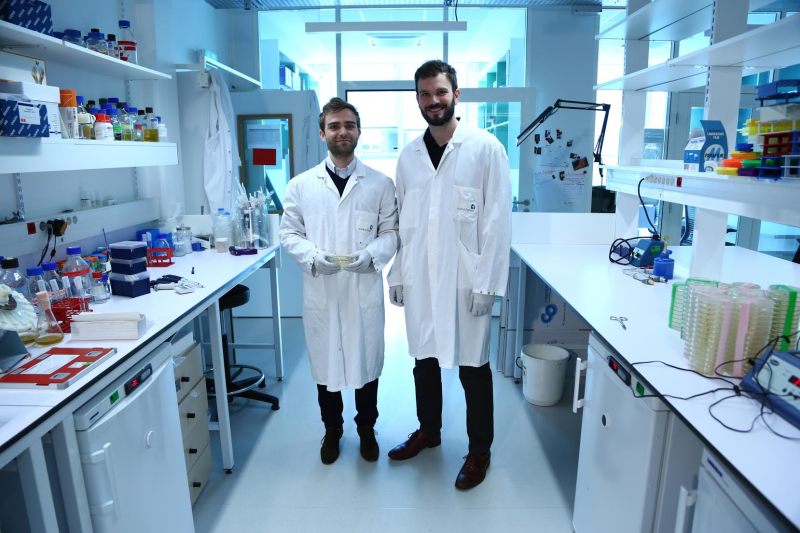 In order to target the “bad” bacteria, Eligo relies on heavy research and analysis of the microbiome from external sources, which identify disease-causing bacteria. In time, Duportet and his team hope to develop and market highly specific and targeted antimicrobials to attack diseases at the root, rather than just treating symptoms.

The team published in vitro (outside a living organism) proof of concept results in Nature Biotechnology and subsequently demonstrated the same results within in vivo (inside a living organism) settings. “We managed to selectively remove a specific bacterial strain from the gut of mice, selectively eradicating it while sparing the rest of the microflora,” said Dr. Duportet.

FDA approval will come later. The startup now plans on working toward its first clinical trials, which it hopes to begin in two years. Like many early-stage biotech startups, partnering with a large pharmaceutical company is an option to consider. “Though we want to push the drugs on the market by ourselves, we are also in discussions with big pharmas about collaborations to bring specific assets to the market in partnership,” said Dr. Duportet.

Since its founding, Eligo has raised a total of approximately $24 million. In addition to today’s $18 million investment, the startup also received a $2 million award from the Worldwide Innovation Challenge. And while this is not Khosla Ventures’ first investment in the microbiome space, it is its first investment in France.

Eligo plans on using the new funds to begin clinical trials, target new bacterial diseases, and grow its team of 15.

When asked whether Eligo had any intention of relocating to the U.S. in the near future, Dr. Duportet replied, “Right now, France is really great for us since research and development-focused startups get great fiscal benefits.”

He points to the crédit d’impôt recherche (CIR), in particular, which states that when you hire someone with a PhD, their wages are refunded for two years. These R&D startups also have a 30 percent tax credit on their research costs.