Square Roots, a vertical farming startup cofounded by Kimbal Musk and Tobias Peggs, announced today that it had raised a $5.4 million seed round led by New York City-based Collaborative Fund. The startup is the high-tech component of restaurateur Musk’s — the younger brother of Elon — ambitious plan to get fresher food to more Americans, develop a more direct relationship between consumers and farmers, and help farmers come up with solutions to modern challenges of the industry.

“We want to bring the farm to a new generation of farmers,” Musk tells VentureBeat in an exclusive interview. In addition to his role with Square Roots, Musk is the cofounder of farm-to-table restaurant chain The Kitchen, which includes The Kitchen, an upscale bistro, and Next Door, a more casual eatery with a lower price point, with locations in Colorado and Tennessee. He also sits on the boards of Chipotle, Tesla, and SpaceX.

Peggs and Musk launched Square Roots last August, setting up what they call an “urban farming campus” — a hydroponic, climate-controlled farm inside of a shipping container — in Brooklyn. (Vertical farming is where the farmer is able to grow plants in an environment where he or she can stack plants on top of one another, such as in a shipping container or a warehouse.) Square Roots also conducts a resident entrepreneurship program, a 13-month program in which the company teaches aspiring farmers how to grow plants inside the Square Roots’ container, while developing a business model to sell their crops.

The program is free for participants — and they keep a portion of the money they make from selling food grown at Square Roots — but they have to put down a hefty $5,000 deposit at the beginning of the program. Participants can apply for microloans through the USDA to help cover the cost of their deposit, according to the application form on Square Roots’ website.

For now, Square Roots’ first crop of farmers is only selling greens like rainbow chard and Tuscan kale. A handful of restaurants and retail outlets — such as Seamore’s, a New York City seafood restaurant, and Mercato, an online grocery delivery startup — also use or sell Square Roots’ greens. 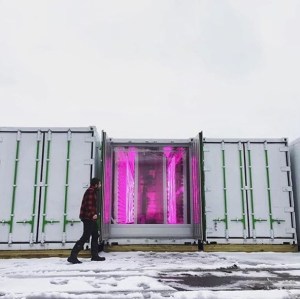 Above: The outside of Square Roots’ urban farming campus in Brooklyn.

Musk has been meeting with farmers across the Heartland for the past several years as his restaurant chain has grown. He believes that Square Roots’ “business in a box” will help get more young people involved in farming, who in turn can help come up with high-tech solutions to problems that modern farmers face.

“You have these 180-acre family farms where you might only make $23,000 a year, and it’s so unattractive to the younger generation,” Musk says. “It’s about how do we get farmers to have a higher crop yield, to get more profitable? I’ve gotten to spend a lot of time with farmers, but I don’t have all the answers.”

Square Roots faces competition from a number of other vertical farming startups, such as Plenty, which raised $200 million in July, led by SoftBank’s Vision Fund. Rob Leclerc, the cofounder and CEO of Agfunder, an online investment platform for ag tech startups, says that while vertical farming does have the potential to allow farmers to reduce labor costs and thus improve their margins, it’s still a costly venture until operations can be fully automated.

“Vertical farms layer on an energy cost which makes it hard to compete with traditional greenhouses and outdoor growers, which get free energy from the sun,” Leclerc tells VentureBeat in an email.

Square Roots’ prices are steep — the startup also runs an online greens delivery business, developed by some of the farmers in its first cohort. A single-serving bag of greens costs customers $7, though Peggs argues that Square Roots has the added value of helping consumers develop a closer relationship with growers.

“You’re getting the freshest food, and a direct relationship with a farmer who can introduce you to different varieties of crops … we believe it’s a good value for the experience you’re buying into,” Peggs tells VentureBeat.