I ate the best meal of my life at New York’s world-famous Eleven Madison Park restaurant. Now I can recreate that gustatory experience ten feet from where I sleep.

Through Kitchensurfing, an online marketplace for private chefs, I can pay a former Eleven Madison Park chef to come to my measly little kitchen and whip up a culinary masterpiece.

Other folks seem to like the idea, too: Since Kitchensurfing launched its platform around a year ago, thousands of chefs have signed up and cooked meals for more than 100,000 people, according to CEO and founder Chris Muscarella. 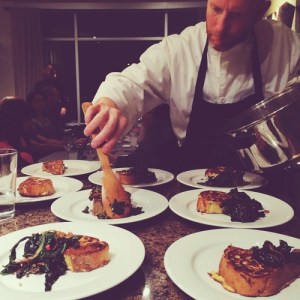 To reduce that end-of-meal awkwardness, the company processes payments online. Then eaters can leave Yelp-style reviews sharing their experiences, which help others decide who (or what) they’d like to try.

The platform initially launched in New York, where the company is based, but has since expanded to Boston, Los Angeles, Chicago, and Berlin.

Kitchensurfing has been lucrative enough for some chefs that they’ve quit their other gigs and rely on the site as their primary source of income. Top chefs gross as much as $200,000 a year through the platform while working half the hours they would in a restaurant, said Muscarella.

Kitchensurfing’s momentum has attracted the interest of several institutional investors, which just poured $15 million into the startup, reported Fortune.

As more technology works its way into the culinary experience at home and on-the-go, venture capitalists have taken notice. Food tech startups soaked up more than $2.8 billion in venture capital last year, according to Rosenheim Advisors. More established players — like Grubhub Seamless, which plans to raise $148 million in a New York IPO — are making big money and big moves. Meanwhile, new startups continue to pop up like weeds, from Culinary Agents, a sort of “LinkedIn for chefs,” to League of Kitchens, which hires New York immigrants to lead cooking workshops from their homes.