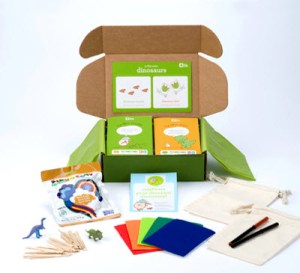 Kiwi Crate, a subscription service that delivers hands-on crafts to your door, has secured $5 million in its first round of funding the company announced Thursday.

The company, which launched in October 2011 with $2 million in seed funding, delivers crates of craft supplies every month for kids ages three to six. Kiwi Crate puts together themed crates that encompass a specific theme — safari, gardening, dinosaurs, and tropical island to name a few — and delivers them to parents each month. Each crate includes enough materials for two projects, plus bonus ideas for additional projects. A subscription will set you back $20 per month or $220 per year. Three month, six month, and one year gift subscriptions are available as well.

What makes Kiwi Crate unique is the process used to put together the crates. Each crate is designed by parents, reviewed by experts, and vetted by kids to make sure it will be a hit with Kiwi Crate’s subscribers. There is also an obvious convenience factor with Kiwi Crate; there’s no need for trips to the craft store for any of the projects.

Since Kiwi Crate launched, it has seen tremendous subscriber growth, and it is tripling its subscriber base each month, TechCrunch reported. The company also nabbed Maker Faire’s 2011 Education Award.

The $5 million fundraising round will be used to keep up with growing demand, help the company serve more customers, and expand Kiwi Crate’s products.

Mountain View-based Kiwi Crate was launched by Sandra Oh Lin and entrepreneurs from PayPal, YouTube, and BabyCenter. Since launching in late 2011, the company has grown to include more than 10 employees and an advisory board of child psychologists and educators. This first round of institutional funding was led by Comcast Ventures, with participation from First Round Capital, Mayfield Fund, Felicis Ventures, Forerunner Ventures, Consigliere Brand Capital, Uj Ventures and 500 Startups.