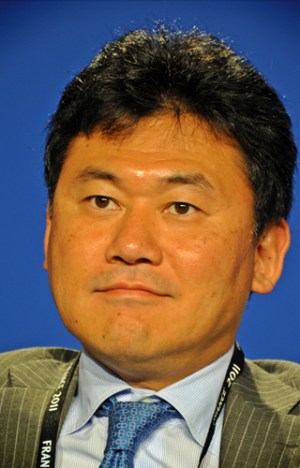 In the deal, Rakuten has bought 100 percent of all issued and outstanding shares of Kobo, which makes products that compete with Barnes & Noble’s Nook and Amazon’s Kindle product lines.

In a conference call to discuss the deal, Rakuten CEO Hiroshi Mikitani (pictured) said that while his company has created “a unique ecosystem” in Japan and internationally, “The e-commerce business is changing quite rapidly.

“We are looking for new strategies, and we started to talk with Kobo … The company is extremely entrepreneurial, fast and strong.”

“We’ve got a shared vision,” said Kobo CEO Michael Serbinis on the same call, noting that this shared vision includes Rakuten’s current users, who he called “50 million potential Kobo customers around the world.”

Rakuten, which bills itself as one of the top 3 e-commerce companies in the world by revenue, will bring Kobo “unparalleled opportunities to extend its reach through some of the world’s largest regional e-commerce companies, including Buy.com in the U.S., Tradoria in Germany, Rakuten Brazil, Rakuten Taiwan, Lekutian in China, TARAD in Thailand, and Rakuten Belanja Online in Indonesia, and of course, Rakuten Ichiba in Japan,” said Mikitani in a release today.

Serbinis also issued a statement, saying, “From a business and cultural perspective this is a perfect match … This transaction will greatly strengthen our position in our current markets and allow us to diversify quickly into other countries and e-commerce categories.”

Mikitani said Rakuten will be working to grow Kobo’s user base around the world as quickly as possible. Serbinis reiterated that Kobo e-readers would remain for sale in large U.S. retailers, as well, adding that the company’s market share is “over 50 percent share in Canada. Our share in the U.S. is … in the high single digits to low double digits.”