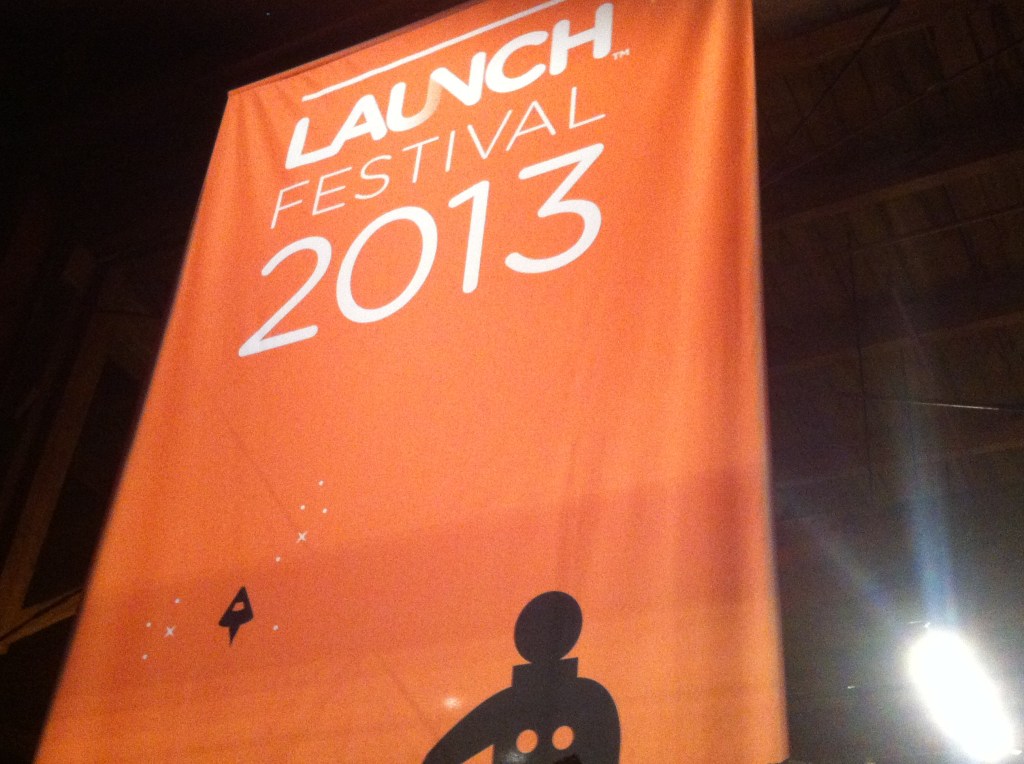 Launch has a little something for everyone in the startup world.Thousands of entrepreneurs, influencers, developers, designers, public relations people, booth babes and investors are attending the Launch festival and everyone is searching for something different.

There are the core companies that use Launch as an opportunity to break out of stealth mode and snag their 15 minutes of fame. Some are looking for exposure, others for investors, and many, of course, are looking for both. Others are simply here to soak up the scene, eat free sandwiches, and mingle with their fellow startup friends who are inevitably present as well. 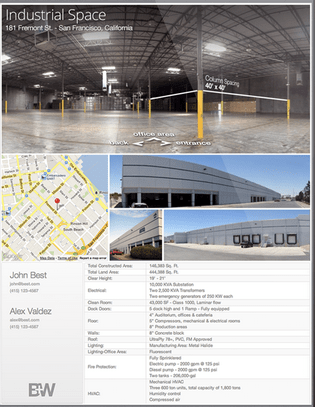 Flyer.io presented yesterday afternoon and quickly shot up to the top tier of the leaderboard. The company takes real estate flyers to the next level with a well-designed, video-centric interface. Rather than creating old school flyers or holding regular showings, brokers can take footage of the space they are renting or selling to create a dynamic, information-packed ad. CEO and founder Isaac Herrera said that the real estate is a 500 billion market that still relies primarily on Google Docs, PDFs, and worse, and he trying to evolve it into modern times.

“I think we got such a response because we are one of the few companies that has a way to make money,” he said at the Flyer.io booth at Launch. “Even being based here in San Francisco, it takes a long time to network with the right people, it is like a social club. While we were here, we accomplished in three days what it would take months to do. Some of the people we tried to contact in the past who never responded and reached out to us, now that they see the product in the market.” 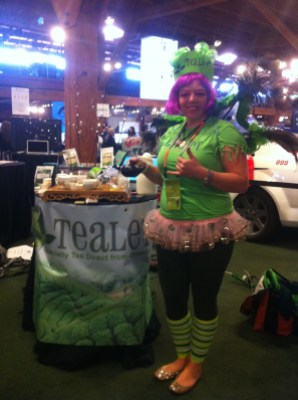 Other companies are not actively fundraising or presenting on stage, they are primarily here for marketing purposes.  Tealet is a marketplace that connects tea drinkers with tea growers with a high-end tea subscription service. The company participated in 500 Startups and presented at 500 Startups Demo Day. Founder Elyse Petersen said she is at Launch in an effort to reach her target audience, 20-40 year old men making over $100,000 a year.

“At 500 Startups Demo Day, we polished our pitch and presented on stage to investors,” she said. “Here, we are looking for geeks and gamers who are obsessive tea drinkers because thats who are our first adopters. They are the people who want to have everything before it becomes cool who are interested in niche connoisseur products. If we were trying to launch a mobile app for a feature that was the same as six others, the crowds would be difficult, but for us, the more the merrier.”

Tealet’s table stands between banners for boring-sounding (but sexy!) enterprise software and ads for dating apps. Down a small flight of stairs, you have a massage “digital detox” area. In another, robots. Walking through the hardware section of the teeming room is a landmine of self driving cars, furry educational smart toys, and even little light-up robotic balls that are guided with an iPhone. 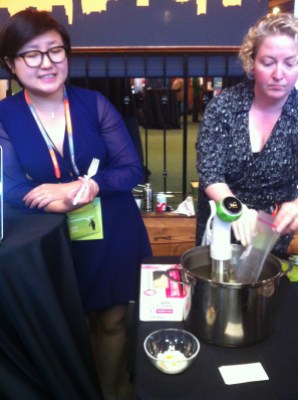 Amidst all the gadgets is Nomiku, a device that raked in over $580K on Kickstarter and is the highest funded project in the food category.  The Nomiku is an at-home sous-vide device that costs just $355, as opposed to the couple thousand dollars of other market options. Founders Lisa and Abe Fetterman were relaxing on their couch one night watching Top Chef when they decided to build their own emergent circulator. Considering Abe is an astrophysicist, this was actually in the realm of possibility. The couple built a prototype, headed to China to participate in an accelerator program and get to know their supply chain, and returned home to get married and roll out a Kickstarter campaign that ended up being extremely lucrative.

“Everyone is so ready to make perfect food,” said Lisa as she fed me sous-vide pears. “Why waste your life eating shit food? Life is so short eat well, its so easy. Put your food in a freaking bag and let exact science take over.”

Hardware and consumer-facing startups are popular with attendees, attracted by tag lines like “travel reviews worth sharing” and “eat out, feel at home”, and names like “My Cute Friend” (where every guy comes recommended). Business-to-business startups are also doing well however,  as this tech-savvy crowd responds well to phrases like “data-driven lead generation” from Zillabyte and “cross-channel, data-driven  ad campaigns” from AdStage.

Many of the attendees are not pitching themselves, but work for more advanced companies that are here to check out the competition and look for potential partnerships. Alex Kouts is the director of product at Razoo, a crowdfunding platform for non-profits. He spent three days at Launch listening to presentations and talks, making partnerships, and picking up ideas about user-experience and design. 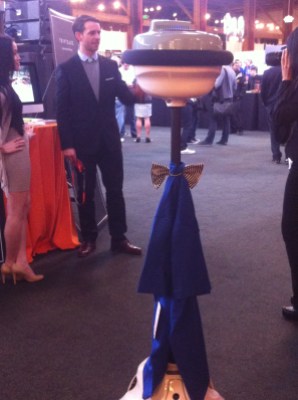 “Launch felt like it was put on by the startup community, as opposed to for it,” Kouts said after the pitches were done. “Every event is the product of the startups they can get to come to it. Some of the startups are really strong, but there is also a lot of chafe. Overall, it felt very entrepreneur-friendly.”

At large demo events like this, the pitch presentations often run together in a muddied stream, which is why I was initially skeptical of impact launching a startup here could have. However, after three days of talking with people from all sides of the tech community, I understand that the value is not what happens on stage, but rather what happens off. Whether it is expanding your professional network, exploring potential partnerships, selling your product to early adopters, or receiving constructive feedback, there is something to be said for being one of many in a crowd, when the crowd is this entrepreneurial.