Imagine being able to control all aspects of your mobile app remotely from one central place, including push notifications, updates, A/B testing, and more.

One company, Leanplum, is making that possible. Today it announced it has closed a $4.8 million first round of institutional funding.

In short, Leanplum is a one-stop shop to manage your app. The company offers content management, A/B testing, analytics, and now, marketing automation as well (in-app messages and push notifications).

“We basically started with A/B testing with mobile apps. We realized that a product manager or a marketer has a lot of ideas. Ultimately, the goal is to build the best app,” Leanplum co-founder and chief executive Momchil Kyurkchiev told VentureBeat.

“Our vision ultimately is, we want to build a data platform, and data testing is at the core of our platform,” said Kyurkchiev. “Others don’t make the data actionable. You can automate things based on your data with Leanplum.”

While other companies offer tools similar to Leanplum’s, and very good ones at that, most offer tools only for one part of the equation. Optimizely, for example, is great for website A/B testing and recently launched tools for mobile, but it’s still very much just staying in one lane. Kontangent also offers a pretty robust data and analytics suite. Appboy and Kahuna are attracting a lot of buzz for their mobile marketing automation tools, but again, only help with one part of the mobile app equation.

“Leanplum has the broadest existing solution,” Jason Pressman of Shasta Ventures told VentureBeat. Shasta led the new round of funding.

Swrve has the closest set of tools to Leanplum’s, also offering mobile testing, analytics, and marketing automation all in one product.

Pressman also pointed out that, in the broader marketing software space, a lot of large players have been acquiring smaller players with the aim of providing comprehensive solutions to their customers.

When asked if he foresees Leanplum being acquired by a larger player, he said, “I would be stunned if there wasn’t a bunch of acquisitions in the next 12 to 24 months. The category is too large, and it’s difficult to build mobile automation.” He added that Shasta’s goal is always to build “large, independent companies.”

The company plans to use the new funds to grow its team, which currently only counts 13 people. Kyurkchiev said he wants his team to be able to respond to customer support requests within minutes, which means he’ll have to do a good amount of hiring.

Leanplum will also continue to add features to its product. “I see a landgrab opportunity. Clearly, it’s a painpoint that we can solve,” he said.

Currently, Leanplum has around 100 customers, including Hotwire, ModCloth, Wanelo, and Gree.

Leanplum was founded in the Fall of 2012 by Kyurkchiev and Andrew First and is based in San Francisco. The company participated in the accelerator program Techstars Seattle and previously raised $825,000 in seed funding from Andrew Wright and other investors. 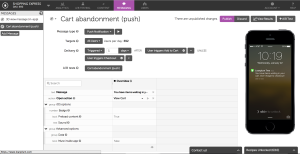