Lemonade, a mobile-first, AI-infused insurance firm backed by chatbots and self-proclaimed ethics, has announced a $120 million series C funding round led by Japanese telecom giant SoftBank. The round saw participation from some existing investors, which include big names such as GV (Google Ventures), Sequoia Capital, and Allianz.

The company told VentureBeat that “most prior investors” participated in this round, though it wouldn’t divulge which ones, specifically.

Founded out of New York in 2015, Lemonade is a fully licensed insurance carrier that underwrites its own policies, unlike many other entrants into the growing insurtech space. With a focus on homeowners and renters, Lemonade strives to differentiate itself in a number of ways, including by cutting bureaucracy and speeding up the application process. However, the company also touts its morals through an annual “giveback” scheme through which it donates all unclaimed money to good causes.

Users choose a cause that they care about through the app, and those who select the same good cause are then penned into virtual groups of “peers,” or like-minded people. Premiums generated from each group are used to cover claims by individuals, and then any money that’s left over is donated to their shared cause. Lemonade takes a flat fee from each member.

For homeowners, policies start at $25 per month, while renters can obtain policies from $5 per month. The whole process is optimized for smartphones, which could be a big selling point in this day and age.

Other notable facets of Lemonade include its chatbots, which are used to automate interactions between the company and its customers — a growing trend we’re seeing across the commercial spectrum. 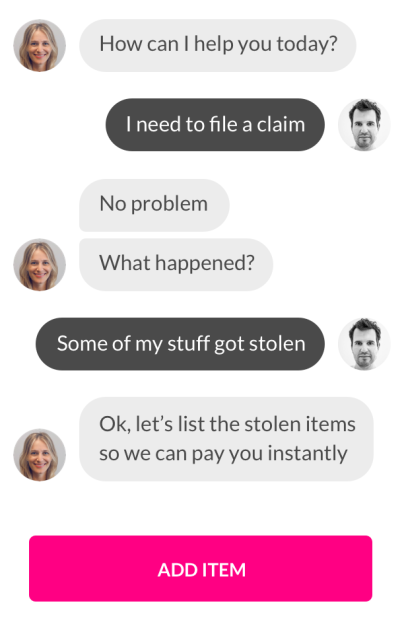 Prior to now, Lemonade had raised $60 million in funding, and with another $120 million in the pot, the company plans to take its service global. Indeed, Lemonadey officially launched in New York last September and has since been rolling things out across the U.S., including in California and a total of 25 states. Now, it’s gearing up to launch internationally in 2018.

“The insurance brands we know today came of age in the era of the horse-drawn carriage,” noted Lemonade CEO and cofounder Daniel Schreiber. “But insurance is best when powered by AI and behavioral economics, which is why we believe that companies built from scratch, on a digital substrate and with a social mission, will enjoy a structural advantage for decades to come.”

A number of online insurance firms have entered the fray in recent times, including California-based on-demand insurance platform Trov, which recently raised $45 million, and Palo Alto-based Next Insurance, which nabbed $29 million to target small businesses with tailored plans.

However, Lemonade completely underwrites its own policies, and its AI-focused, mobile-first approach is clearly appealing to major corporations — such as SoftBank, which has gone gung-ho as an investor this year across the startup realm.

“SoftBank is an ideal partner for us, and we are thrilled to have them on board,” added Shai Wininger, president and cofounder at Lemonade. “We share SoftBank’s conviction that big data and machine learning are set to profoundly remake our entire industry, and SoftBank has the vision and means to enable this common vision to become a reality.”

SoftBank has deep pockets and an increasingly global reach through its investments — so Lemonade is in good company if it’s to launch its insurance platform outside the U.S.