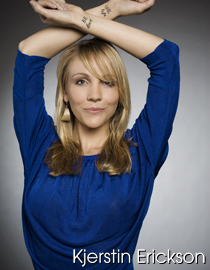 A truism in the venture capital industry is that firms “invest in people,” not just great business ideas. So what if that premise was literally true?

Three entrepreneurs are offering a share of their life’s income in exchange for cash upfront and have banded together to form the Thrust Fund, an online marketplace for such personal investments.

Kjerstin Erickson, a 26-year-old Stanford graduate who founded a non-profit called FORGE that rebuilds community services in Sub-Saharan African refugee camps, is offering 6 percent of her life’s income for $600,000.

“So many friends are in the same boat as me — they’re struggling along, wanting to see so much more from their organizations or to let them fly on their own. But it’s hard not being able to get out of the daily grind and raise what you need for payroll,” she said. “The Thrust Fund is appealing because it lets me fast-forward a couple years.”

Erickson said she’s close to signing a deal within the next few weeks and is already fielding several potential investors. A back of the envelope calculation suggests that she would have to earn roughly $250,000 a year after taxes until she turned 65 for an investor to break even, excluding inflation and the opportunity cost of investing elsewhere.

Considering that she’s so far devoted her life to the social sector and valued impact over immediate salary, those would seem like tough odds. But Erickson countered that she’s looking to build a for-profit venture next and that her tenacity in building a multi-national non-profit at 20 is evidence she could succeed.

Plus, the nature of a life investment contract is personal: some investors want a pure cash return, while others would be satisfied with a mix of social impact and financial accountability. Still others consider this a form of artistic patronage with captured upside.

She pointed out that people pursuing unconventional career paths without consistent salaries like novelists and film producers have chances to score outsized hits. Elizabeth Gilbert published the bestselling book “Eat Pray Love” at 33, while President Barack Obama, who spent years in community organizing and public interest law, was paying off student loans until his autobiography, “Dreams From My Father,” came out.

Erickson’s Thrust Fund comes at a time of deep experimentation in early-stage financing across the technology and media industries. The transparency afforded by social networking is making it easier for investors to vet people’s reputations and hold them accountable. At the same time, the initial amount of capital needed to build, market and distribute a product or service has fallen, undermining the venture capital model and making angel investors relatively more powerful.

The social sector is no exception. The idea to start a fund came from an angel investor, Rafe Furst (pictured left), who had already signed a life investment contract. Furst, a serial entrepreneur who started and sold Pick’Em Sports in 1999, devised the original contract after seeing similar deals in the world of professional poker.

“In the poker world, there’s this concept of backing or stackhorsing where you have a talented player that’s gone broke,” Furst said. “They don’t have a bankroll but you could back them and take a share of their later winnings.”

Furst and his partner Phil Gordon were intrigued by the idea of applying such a contract in the real world to talented people early in their careers.

“We all know people who are going to do great things with their lives. It’s just a matter of time,” he said. “What if you were able to add capital to the equation and suddenly create a bigger pie that you both could share in?”

But Furst couldn’t get over the uncomfortable idea that such a contract equated to indentured servitude. So he structured a buyout clause in the agreement that lets the investee repay a multiple of the initial amount if they want to exit the agreement. If they decide to buy themselves out in less than three years, he’ll ask for three times the investment. But if they wait, the multiple rises with every year until it reaches a maximum of ten times the initial amount.

Furst’s investee, who he presented at the TED Conference in Long Beach last month, is a filmmaker who also happens to be his brother-in-law. Jon Gunn has solid work in the pipeline: he’s writing two animated feature-length films for Dreamworks and a movie for Paramount based on a Mattel toy. (Think “Transformers”, he says.) Plus he directed a recently released film called “Like Dandelion Dust” starring Mira Sorvino that swept up 26 awards at 23 recent festivals.

But to get to that point, Gunn built up debt by putting filmmaking above regular-paying jobs.

“I started to find myself creatively restrained because of financial limitations, meaning I wasn’t able to make strategic smart career decisions,” he said. “I was taking jobs I wouldn’t have taken, projects I wouldn’t have done and that was pushing me away from getting to the next big thing.”

“A year ago, Phil approached me and said it sounded like I had a lot of really good things going on. He asked, ‘What would it take for me to own 1 percent of you?'”

Gordon and Furst both bought 1 percent of Gunn’s future life income for $125,000 each. Gunn said he’s used the money to pay off debts and give himself breathing room as he works on three films.

The contract has spurred an intense debate within the social enterprise community. Nathaniel Whittemore, who is building a startup called Assetmap that helps groups manage their resources, argued that he wouldn’t take the investment, because he values freedom and the upfront money isn’t enough to have an impact.

“The idea of the lifetime debt, even though I know it is a potentially good financial deal, is unpalatable to me,” wrote Whittemore, who is debating Erickson tonight in downtown San Francisco.

Neither Furst nor Gordon get any official say in what their investee does with the money. The same is true of Erickson’s agreement, although she plans on writing quarterly reports. This isn’t like a traditional venture agreement where lead investors can take seats on a board of directors and hold power over the future direction of a company. Furst says he’s OK with that.

“My investments are with the people I already know and have great relationships with,” he said. “I’m personally very adamant about the issue of trust. That’s why this isn’t a 50-page contract. That would underscore the ridiculousness of controlling something that’s uncontrollable. If the participants don’t trust each other to work together and cooperate, it won’t work at all.”