For millions of people today, living with diseases like Parkinson’s and Essential Tremors adds layers of shaking-induced difficulty to the most mundane everyday tasks — including eating, writing, and unlocking doors.

This reality has created a major opportunity for Rock Health-backed Lift Labs, which is working on technology that cancels out the effects of tremors. The company’s first device is Liftware, a spoon attachment that addresses a basic but significant problem: getting food to your mouth without spilling it.

“It’s an emotional thing. If people can’t do something as simple as eating, they feel like they lose some independence and dignity. This really affects them,” Lift Labs CEO Anupam Pathak told VentureBeat.

Realizing just how many people Lift Labs can help convinced the company’s angel investors, who have led a $1 million seed round, to help get Liftware into people’s’ hands. (The company has raised $1.8 million to date.) 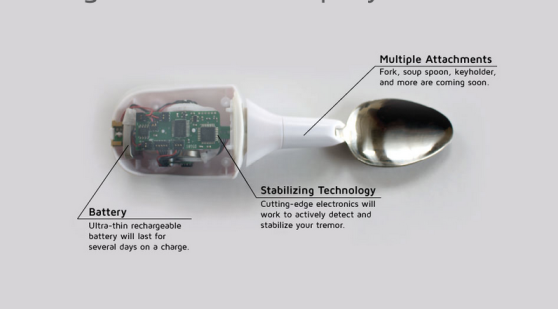 Here’s how it works. When users pick up Liftware, its sensors detect tremors and cancel them out, often by as much as 70 percent. This greatly reduces the chance of spilling and eliminates much of the embarrassment those with Parkinson’s feel when they eat out.

While Liftware sounds pretty revolutionary, its underlying tech is actually an extension of the image stabilization features in today’s cameras and smartphones, which let the devices compensate for natural hand jitters.

But the Liftware tech can also be used for more than just eating. Pathak says Lift Labs is also planning a similar attachment for keys, another object that often requires a steady hand in order to be used.

In other words, Liftware is just the beginning.