Bike-sharing is popular in Asia and Europe, but the U.S. has been notoriously wed to its cars. So to make the transition to its bikes easier, LimeBike created dockless bike-sharing, which means you don’t have to bring the bike back to a particular dock after you ride it.

The company launched in the U.S. in Greensboro, North Carolina, home to the University of North Carolina. It has expanded to Imperial Beach, California; South San Francisco; Dallas; Seattle; Key Biscayne, Florida; South Lake Tahoe, California; and South Bend, Indiana. By the end of this year, the company hopes to be in 30 to 40 markets.

The company is one of the startups that hopes to make transportation in cities cleaner, more efficient, and affordable — all in the name of urban sustainability.

LimeBike does this by putting an electronic lock on the back wheel, preventing it from being ridden unless you unlock it first. You use LimeBike’s app to locate the nearest bike, which has a global positioning system radio, 3G connectivity, and a QR code on it. You point your smartphone camera at the lock, and the app determines if you’ve got the proper authorization to continue. If you’re successful, it unlocks the bike and then charges you on an hourly basis. When you are done riding, you can see your final stats, and the bike locks itself.

San Mateo, California-based LimeBike has been working on this for the past year. Toby Sun and Brad Bao formally founded the company in January. They settled on a model in which they charge $1 per half hour. They made the bikes lime-colored so they would be easy to spot. 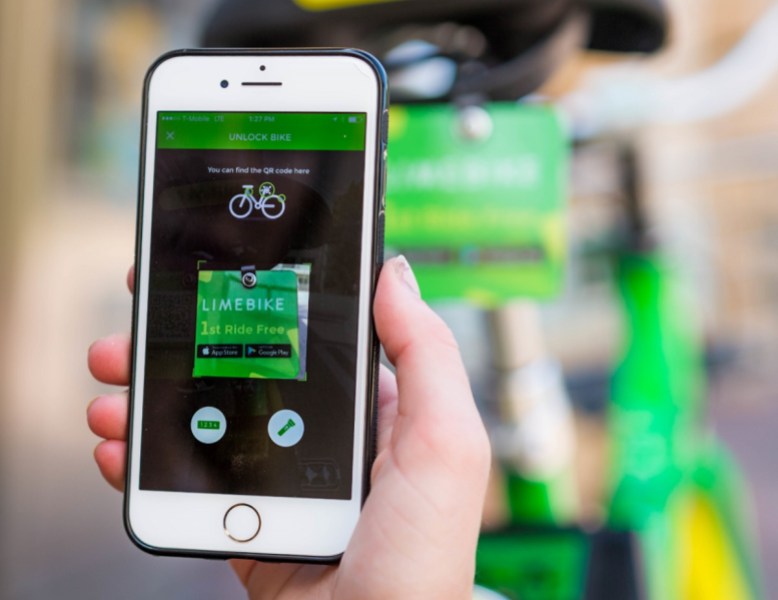 Above: LimeBike lets you unlock a bike with an app.

“We scanned the global competitive environment for mobility options,” said Sun, CEO of LimeBike, in an interview with VentureBeat. “You can imagine it as Uber or Lyft meets bikes.”

When the company launched in Seattle, it partnered with various workplace startups, such as WeWork, Zulily, EnergySavvy, and New Tech Northwest. Those companies are offering LimeBike as an employment perk through the LimeBike Business Network. LimeBike manages thousands of bikes, doing the maintenance on them as needed.

Sun said the company has raised $12 million in funding from Andreessen Horowitz, IDG Ventures, DCM Ventures, and others.

“Bike-sharing is not new, and it has been around for many years in Europe,” Sun said. “But we brought the model of dockless sharing from China to the U.S., where only about 1 percent of the traffic is from bikes. The goal is to make riding a bike very affordable, available, and accessible to everybody.” 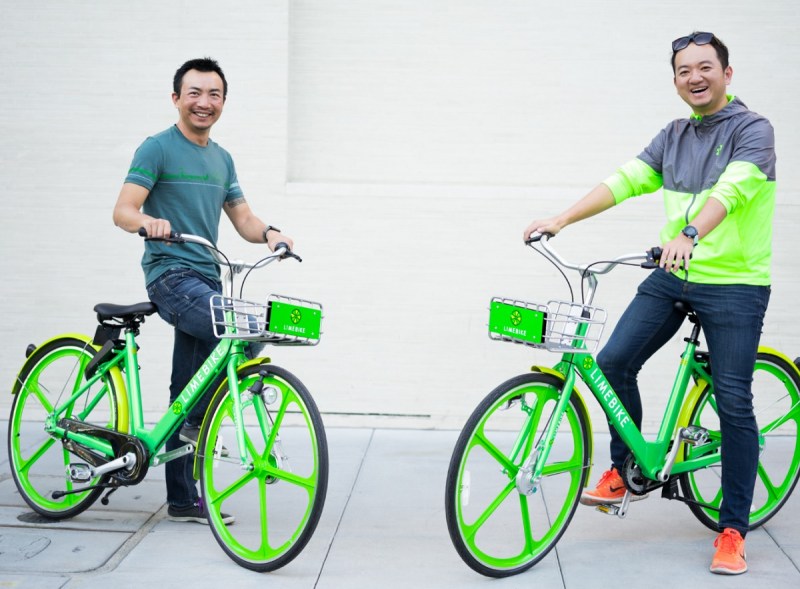 Above: Brad Bao (left) and Toby Sun are the founders of LimeBike.

So far, riders have taken the LimeBikes on more than 250,000 rides. In the university cities, in particular, students take the bikes on a half-dozen rides per day.

Rivals include Velos, Santander, and Next Bike in Europe; Obike, Mobike, Ofo, and Bluegogo in Asia; and Motivate, Zagster, B-cycle, Spin, and Cycle Hop in the U.S.