Morningside Ventures led the round, and existing investors participated. The funds will enable Boston-based Linus Health to grow its team and accelerate the development of its platform to address the urgent need for cognitive screenings and insights as the prevalence of dementia grows to more than a million diagnoses per year in the U.S. alone.

The funding news follows a string of studies that validate the efficacy of the Linus platform in detecting cognitive diseases, said David Bates, CEO of Linus Health, in an interview with VentureBeat.

“Some reports would say Alzheimer’s disease starts to set in 20 years before it becomes clinical,” Bates said. “So what are those very, very early symptoms? And through lifestyle modification, can you enable disease course modification? I’d say there’s a good body of evidence to suggest yes, you can. The sooner we can intervene, the better the outcome will be.”

Above: Linus Health measures a number of things in its cognitive assessments.

A 2020 study found that the economic burden of Alzheimer’s disease treatment in the U.S. is estimated at $305 billion, and it’s expected to grow to more than $1.5 trillion as the population ages. Given the staggering cost of Alzheimer’s disease and related dementias, today’s funding news comes at a crucial time for Linus Health and brain health as a whole, as early diagnosis and treatment can lead to better outcomes and lower costs for patients, caregivers, and health care systems.

“We’re very committed, not just in the U.S., but globally. The thing I love the most is we have great technology and great science, but the people are very committed, and they give up other opportunities, maybe more lucrative opportunities from a salary standpoint, but they really care about this,” Bates said. 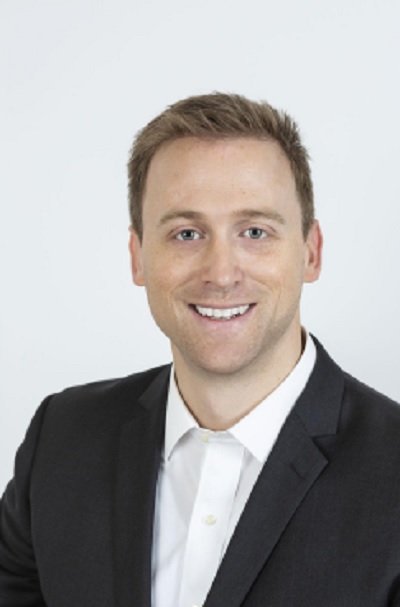 Above: David Bates is CEO of Linus Health.

Linus Health wants to enable millions of people to get tests. The problem is that it takes trained physicians time to diagnose patients in sessions for every person who needs a test for dementia or Alzheimer’s.

“About 80% of dementia is treated in primary care, but they’re not as equipped to treat it,” Bates said. “They don’t have the tools and insights for the early detection.”

Bates came from venture capital, and he teamed up with a medical expert. Dr. Alvaro Pascual-Leone, Linus Health’s cofounder, is a behavioral neurologist, neuroscientist, and professor of neurology at Harvard Medical School. They named the company after Linus in the Peanuts comics, as he was a kind of trusted adviser.

“Even though it’s high tech, we really want to be that trusted advisor, that friend, to everyone we serve,” Bates said.

After years of looking for an investment, they started the company themselves in 2019, focusing on assessments like one known as DCT clock, where a patient draws a clock.

“We grew rapidly because we were able to partner and license technologies like the DCT clock, which was a pretty mature digital tool,” Bates said. “It was already registered with the FDA. So that was a boost that we’ve just continued to forge some really strong relationships. We looked at it not only from an objectivity and sensitivity standpoint of these tools but from scalability.”

They also wanted to make the testing more accessible and standardize detection and recommendations.

“What Linus Health does, in a nutshell, is multimodal signal detection,” Bates said. “We look at people’s behavior, a variety of different standpoints, like eye-tracking, voice, motion, as well as the output. Then we extract insights from that.”

The team has about 40 people, including engineers, data scientists, and a clinical team that includes neuropsychologists, consultants, and neurologists.

While there are other cognitive screening companies, Linus Health tries to analyze the person taking the test, rather than looking at the results of a test.

“That’s why our data is much richer, more insightful,” he said. “And we can do a lot more with it. And we can do it in a much shorter period of time. We use machine learning to understand what is significant, what is meaningful. And then we use the advances in science and medicine to understand how these signals tie to brain function. And we can get better insights into what the person is experiencing now and what they are experiencing over time.”

How the tests work

Above: Linus Health renders an analysis of brain health tests.

Researchers have used the Linus platform and assessments, such as the DCTclock digital clock-drawing test, to identify the beginnings of Alzheimer’s disease pathology in their studies.

Tests such as the Montreal Cognitive Assessment (MoCA) and the Clock Drawing Test (CDT) are used to detect cognitive change arising from a wide range of causes, from strokes and concussions to dementias such as Alzheimer’s disease. The problem is most tests detect the impairment in brains only after it affects people’s lives.

With Alzheimer’s, changes in the brain may occur 10 or more years before the cognitive change becomes noticeable, and no easily administered test can detect these changes at the very earliest stage. But in recent years researchers have developed a predictive model that, coupled with existing hardware, opens up the possibility of detecting disorders such as dementia earlier than ever before. 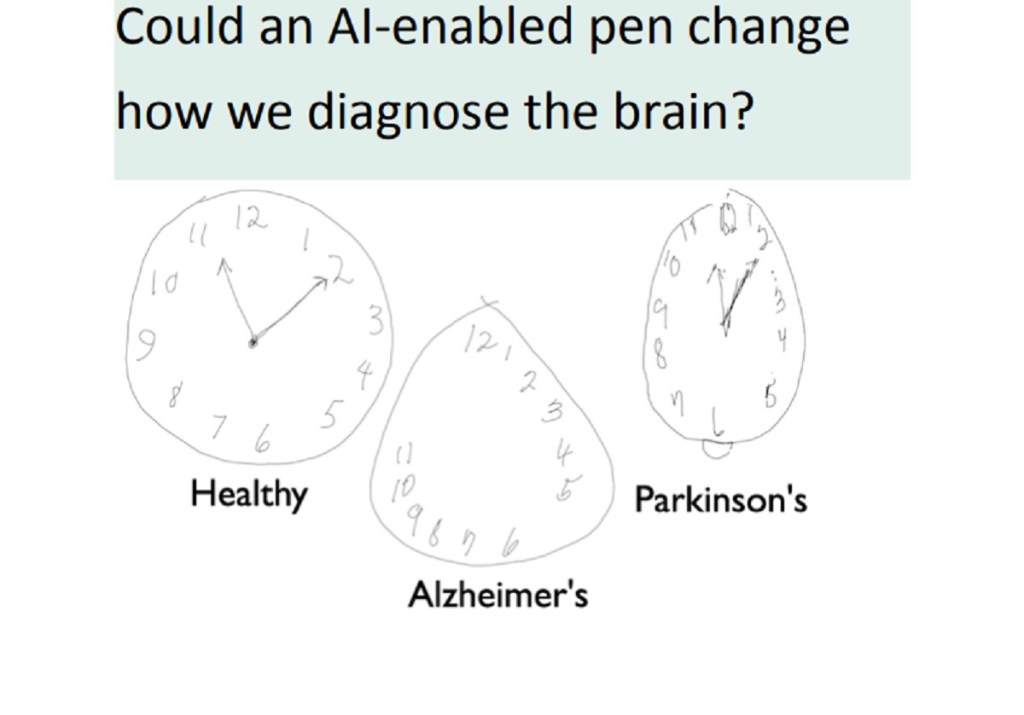 For several decades, doctors have screened for conditions including Parkinson’s and Alzheimer’s with the CDT, which asks subjects to draw an analog clock-face showing a specified time and to copy a pre-drawn clock.

But the test has limitations because its benchmarks rely on doctors’ subjective judgments, such as determining whether a clock circle has “only minor distortion.” Researchers at MIT found that the Anoto Live Pen, a digitizing ballpoint pen that measures its position on the paper upwards of 80 times a second, can give more precise data when patients use it to draw on a tablet.

The pen provides data that is far more precise than can be measured on an ordinary drawing, and it captures timing information that allows the system to analyze every one of a subject’s movements and hesitations. If you take a long time to draw a circle, then that can be measured. Bates said some of these tests can produce telling results in a couple of minutes.

Bates said that Linus Health has been able to do tests in the tens of thousands. But the company’s goal is to scale up to millions of tests and enable some people to be tested repeatedly. Digital tools such as tablets can collect objective data and turn it into actionable insights.

The solution allows care professionals to monitor brain health remotely, easily, and conveniently over extended periods of time, even outside of clinical settings. Linus collects, aggregates, and analyzes information drawn from data points like voice and speech patterns, visuospatial memory, dual-tasking ability, and fine motor control, as well as movement, balance, and pulmonary capacity and can link with electronic health records to provide a comprehensive picture of individuals’ brain health. 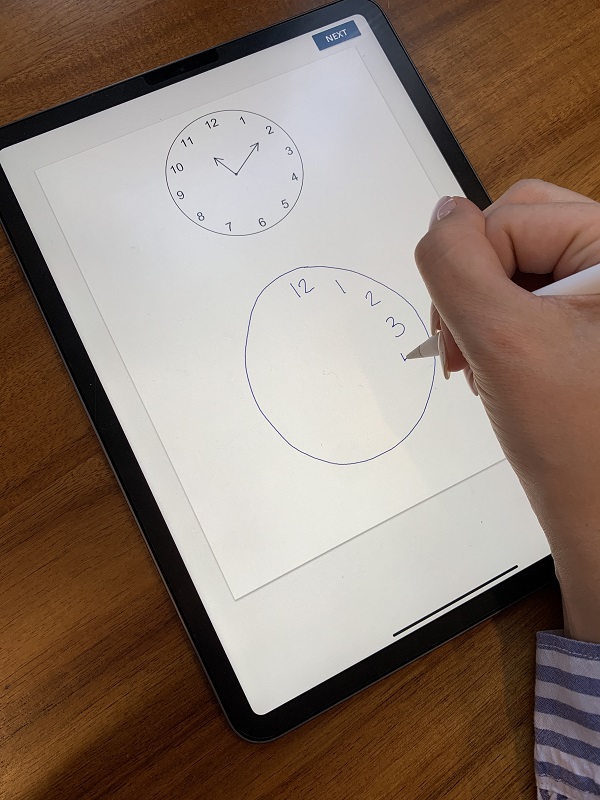 Above: Drawing the DCT clock test on a tablet.

Most recently, Linus’ platform was proven highly effective in detecting early Alzheimer’s symptoms in a study from researchers at Massachusetts General Hospital (MGH). The company is expanding those understandings through a much larger study conducted by the Global Alzheimer’s Platform Foundation (GAP).

Bates said the team at Linus Health is dedicated to the cause and feels a lot of responsibility to develop and perfect the rapid early detection of subtle changes that can predict cognitive decline in people.

“When we go to these memory care facilities and we just know that each one of them has family,” Bates said. “They’ve been through so much. They’re frustrated because they can’t even communicate sometimes anymore. And we really feel like we have an opportunity to help, and that’s what we’re we’re intently focused on.”

Linus uses multimodal digital tools designed to be easily scalable and accessible, lowering the cost of care dramatically while detecting symptoms earlier than traditional testing and at the most ideal time for an intervention. Early detection is the first step in addressing cognitive decline, and Linus Health is providing the foundation to deliver screening and specialist insights into primary care globally.

Pascual-Leone said in a statement that Linus has aggressive goals in the next three years to address the threat that dementia poses to the aging population, and today’s funding news is an important piece to accelerating the timeline.

Insurance has begun to cover these tests. Bates said it could take a couple of years or more to scale up tests to the millions. The challenge is huge. Anywhere from three million to five million people in the U.S. have Alzheimer’s, and many millions more have dementia, such as my mother. COVID-19 has also taken a toll on the brain health of many people.

“You can’t mess around with human health. You need to be precise, and you have to show that, and I think we have shown that,” Bates said. “There will be increasingly rapid adoption across these different verticals. We’re very much in research in pharma. But we’re increasingly moving into senior care and clinical care.”