It might not seem like it, but technology played a big role in the creation of Lorals, panties that are available for presale today. These are panties designed to be kept on during oral sex.

For a couple of years, Lorals CEO Melanie Cristol did research in the budding field of “sex tech” to figure out how to create a product that enables women to experience oral sex through latex panties with fewer worries.

Cristol is a “peer sex educator and an all-around open person.” She said many women have confided to her that  they’ve rejected oral sex when they wanted to say yes for various reasons. They said they hadn’t showered, had just worked out, were on their periods, or other reasons. (Getting sexually transmitted diseases is a big concern.) 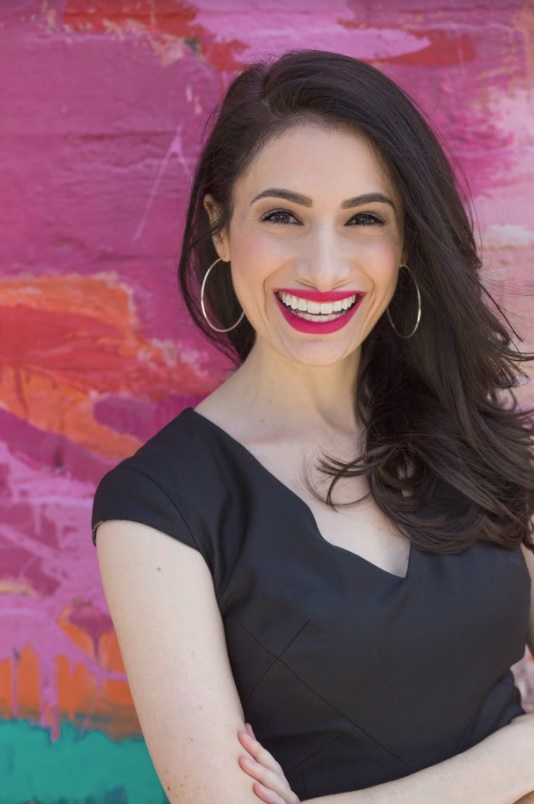 Above: Melanie Cristol, CEO of Lorals.

“After one-too-many self-conscious moments, I started the [Lorals],” said Cristol, in an email to VentureBeat. “I’ve had the same issue, and the old fashioned dental dam just wasn’t doing it for any of us. So I engineered a patent-pending sex tech product that lets women feel fresh anytime, but still allows for ultimate pleasure. Our prototypes have been tested and approved by a variety of women and couples, and we’re ready to bring Lorals to the world.”

Lorals are available for presale now, for $25 for a pack of four. The product will ship in August. While promoting safe sex and preventing sexually transmitted diseases is an obvious benefit, Lorals can’t yet promote the product that way because it doesn’t yet have any approval from the Food and Drug Administration.

Cristol started working on the idea in 2016.

“Our technological advance was to engineer latex clothing that looks and feels like lingerie, yet is as thin as a condom. That had never been done before,” she said.

Usually, latex clothing is 0.4 to 0.5 millimeters thick, which Cristol said is not nearly thin enough to pass along a full sensation, nor is it stretchy enough to allow tongue or finger penetration. 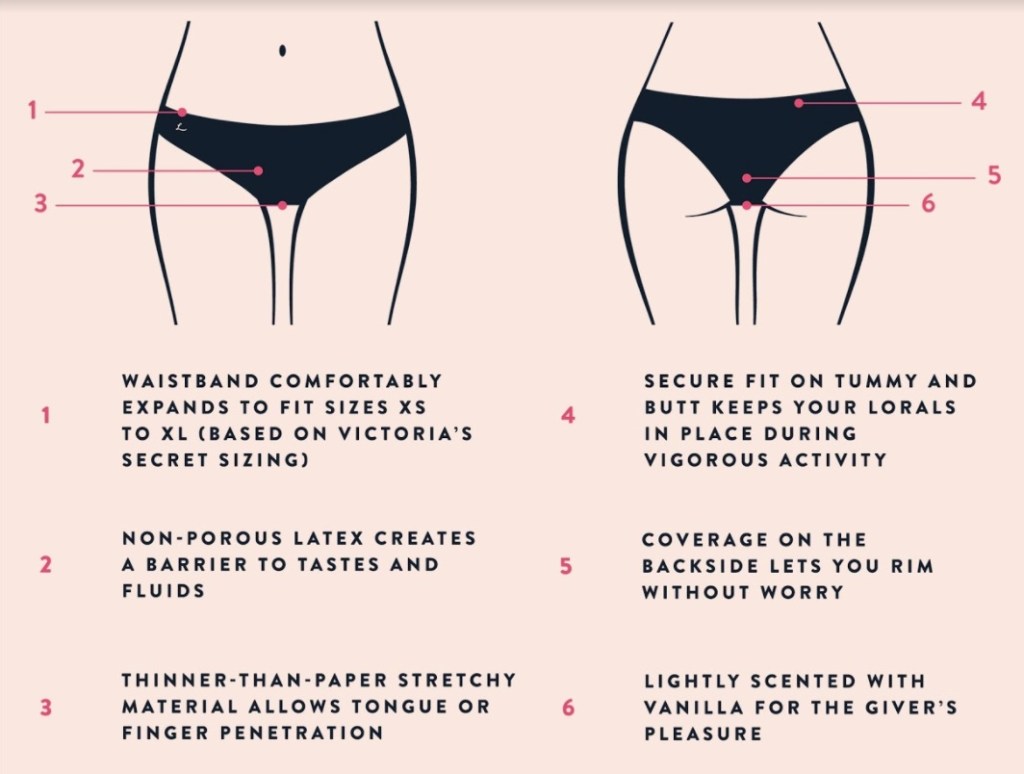 “Imagine trying to maneuver a tongue around a taut piece of latex fashion underwear — your tongue would get exhausted real fast,” Cristol said. “Also, novelty latex clothing is super sexy to many people, but it’s not as widely appealing as a fabric like silk or satin. We wanted Lorals to feel like regular lingerie, while still providing the non-porous and elastomeric properties of latex.”

Cristol saved up for the startup after years of working as a corporate attorney.

“We spent years in R&D, working with several different manufacturers through dozens of rounds of prototypes. We eventually determined how to use the latex dipping process (also used for condoms) to make clothing items like Lorals,” she said. “Our product and our process are utility-patent pending in the U.S. and in several countries internationally.”

For most latex fashion, liquid latex is spread out into a sheet shape.  Latex clothing manufacturers purchase the sheet latex in rolls, and then they manufacture the clothing by gluing pieces of the sheet together. For condoms (and for Lorals), mandrels are dipped into liquid latex to create a 3D film.

The resulting Lorals are about 7 hundredths of a millimeter (0.07 millimeters) thick, or 5 to 10 times thinner than normal underwear. They’re good for a single use, as they lose their shape after use and are not strong enough for a washing machine.

As an aside, Cristol said that edible underwear is a completely different product. Those are made from a sugar base and dissolve upon contact.

“Edible underwear sag on the body because they lack elasticity. The manufacturers even advise that the strings be tied loosely to avoid breaking.,” Cristol said. “Lorals hug women’s curves and are snug to the body. Our ultra-elastic material can be adjusted by the user for the perfect ‘fit’ and style.”

On top of that, Lorals block scents, tastes, and fluids, so they can be used after the gym, during menstruation, or under “wet” circumstances. Edible underwear dissolves upon contact with fluids, so it doesn’t provide long-lasting coverage. 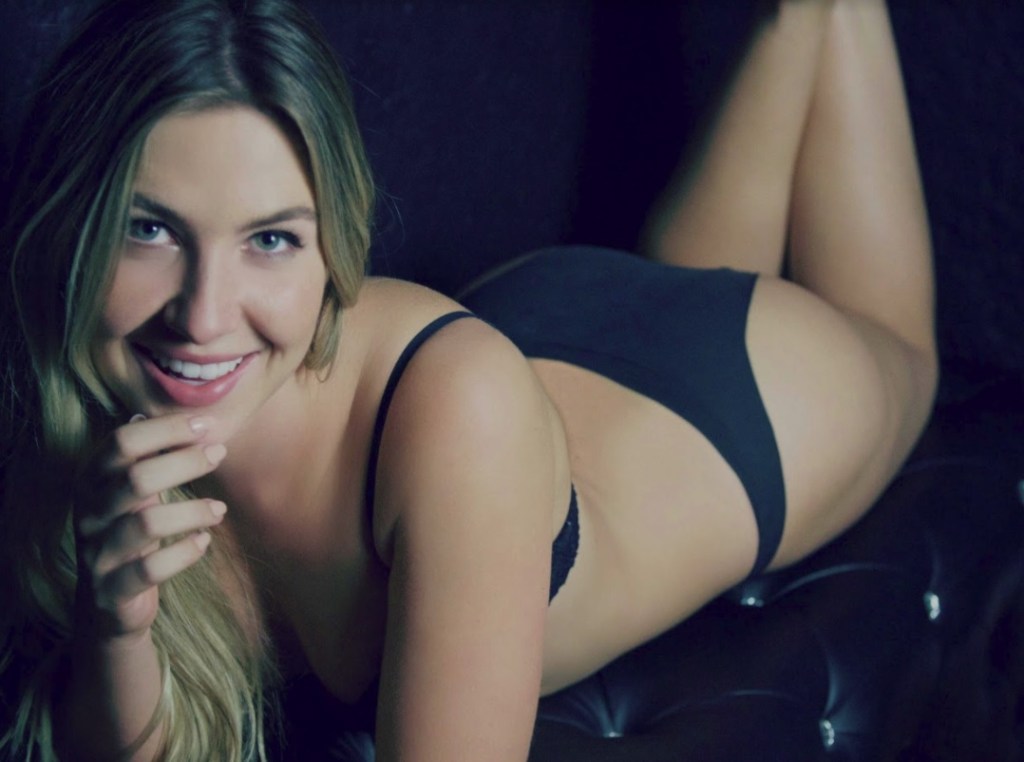 Above: Lorals are one-time use oral sex panties.

Edible underwear is also much thicker than Lorals.

“Our ultra-thin material provides all the sensations of oral sex, unlike thicker lingerie,” Cristol said. “We considered that women often appreciate oral sex for a sustained amount of time and designed Lorals to withstand all of the playtime a woman desires.”

She also said that edible underwear leave a sticky residue (from the sugar) and a ton of cleanup.

“Lorals are single-use for the same reasons condoms are single-use,” Cristol said. “When you pull them off (especially in the heat of the moment), they tend to lose their form.”

The name Lorals was shortened from the goal of helping women, “Love Oral Always.” Cristol found that four out of five women they surveyed said they said no to oral sex when they wanted it. She noted that oral sex is three times more likely to lead to an orgasm than intercourse.

“So if Lorals can help women receive more oral sex, we’ll get closer to solving the orgasm gap,” Cristol said.

Cristol said that those who preorder can help determine what comes next: additional size options, additional color options, or an STD-protection version. To do the latter, Lorals would have to do more testing, such as proving that micro infections cannot get through the latex barrier.