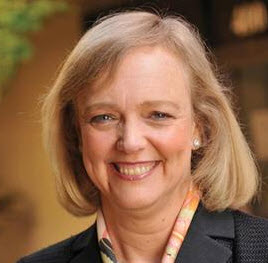 “If we get out of the big M&A business, we have to invest in R&D,” the chief executive of HP said Monday on her first analyst conference call.

HP is still digesting its $10 billion acquisition of Autonomy, a commercial software company, which was heavily criticized because it commanded so much of HP’s market value in exchange for a gain of about a billion dollars in revenue. That’s a small amount for a company that generates $127 billion in revenue a year. That acquisition, initiated by previous CEO Leo Apotheker, has now closed.

“No large acquisitions in 2012,” Whitman said. “Nothing the size of Autonomy, and maybe more like sub-$500 million.”

She hedged that by saying, “Software may be the one area that may move in 2012, and we may want to be there.” Whitman said HP has to be sure it fills the hole and HP doesn’t pay too much for it.

“We cannot continue to rely on acquisitions alone at HP,” she said. “It’s just the wrong thing to do. We have a lot of runway with our own internal R&D capability, if we run it right.”

Whitman made the remarks as she explained why HP’s earnings expectations for next year are a lot lower than what Wall Street expected. HP is predicting $4 a share in earnings per share, compared to previous expectations of $4.56 a share. HP is no longer providing revenue guidance because HP is now managing for profitable growth, not revenues.

Whitman said she is cautious about 2012 growth because of the macroeconomic headwinds across all major regions of the world, the flooding in Thailand that will hurt PC sales for two quarters at least, and HP’s own specific issues such as higher R&D spending. She said that HP is also hiring more salespeople than it previously did.

Whitman said that HP was surprised at the weakness in the quarter for consumers buying printing supplies and printers. The disk drive shortage is helping HP in part because those who are building their own servers — Google and Facebook — are not able to do so now because they can’t get drives. They are calling HP to get servers, since HP made strategic purchases of hard drives in early October.

“I think this is going to affect the industry dramatically because it is PCs, servers, and storage,” she said.

Toni Sacconaghi, an analyst at Sanford Bernstein, challenged Whitman and said it looked like HP was losing considerable market share in various markets. Whitman said the consumer was weak all year. She said in response that HP’s problems are a third HP’s own doing. She said that some customers thought HP was getting out of PCs and so “we did ourselves in right there,” a reference to Apotheker’s plan to spin off the PC business.

“We have to get out of the news cycle and reduce the drama here,” Whitman said.

Cathie Lesjak, chief financial officer, said that HP gained share in printers, servers, and a variety of other markets. Lesjak said that the huge services group faces a big turnaround task, and that may last years rather than quarters. HP will consider letting go of low-margin services business and investing in high-margin services.

“We are making some long term bets here because we just can’t afford to run the company for the short term,” Whitman said. “We are investing for the next decade.”