Mesosphere, a startup that has pushed some of the open-source tools Twitter and Airbnb have used to run their data centers, has gotten the gutsy idea to sell an entire data center operating system, apps and user interface and all. And not only that — investors have given Mesosphere a fresh $36 million to work with.

Some of the people behind Mesosphere have already spent a long time devising tools like Apache Mesos to automate the process of very efficiently deploying applications across servers in data centers. In recent months they’ve gone much further, constructing a sort of master tool, drawing on a wide variety of open-source tools.

“We’ve built an entire operating system at the scale of the data center,” Flo Leibert, chief executive and a cofounder of Mesosphere, told VentureBeat in an interview.

The Mesosphere Data Center Operating System, or DCOS, provides a graphical user interface where an admin can choose to deploy several distributed-systems technologies, including the Hadoop file system for storing lots of different kinds of data, Cassandra and Accumulo databases, and the Kubernetes container management tool. From there, it’s possible to track CPU and memory utilization for all the machines running in a Mesosphere cluster. And using tools like Chaos Monkey — as an app on Mesosphere, an admin can make sure an application can keep running in the event of an outage across several machines. 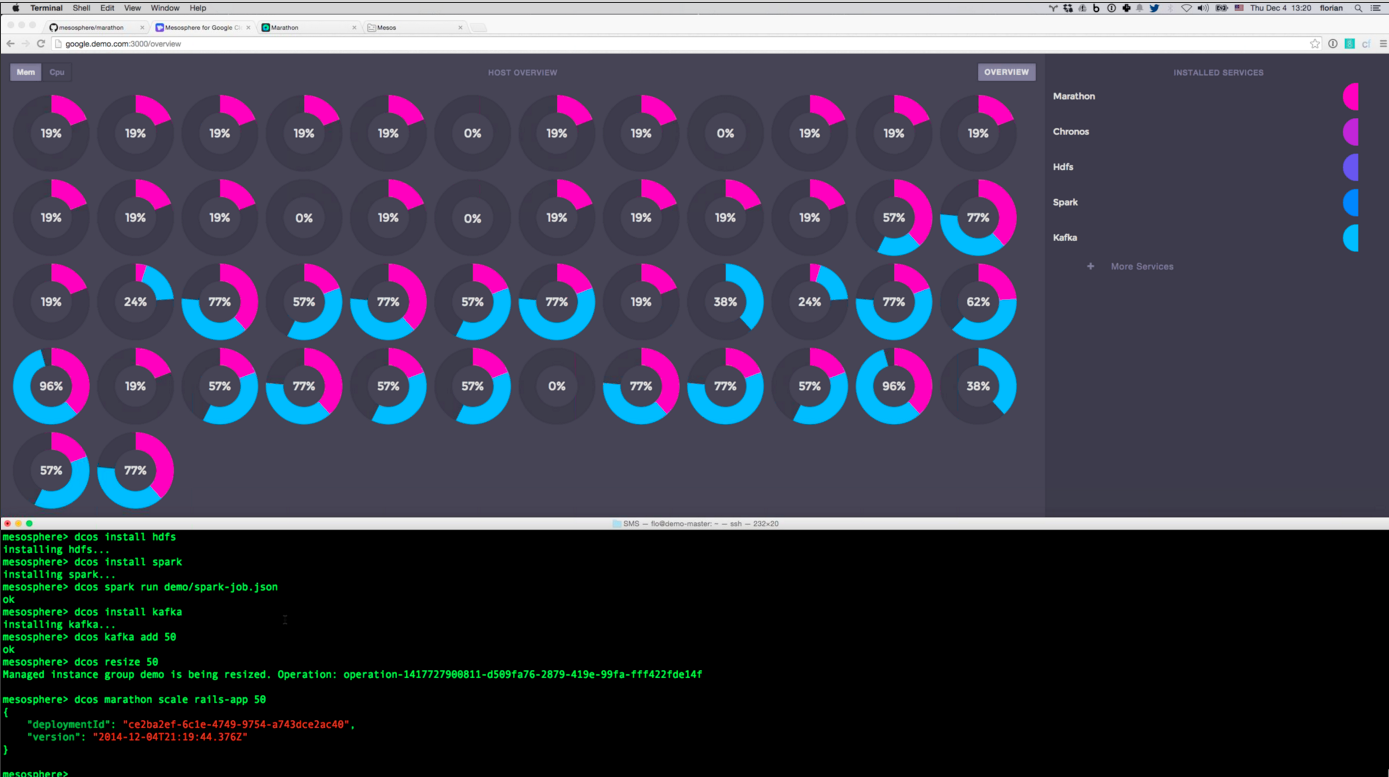 Above: On top, a visualization of memory usage for all the server instances running Mesosphere — and applications on top of it — on Google’s public cloud. On the bottom, a command line to control the operating system.

The DCOS can run in companies’ data centers or on clouds, or across multiple server environments.

As the Mesosphere movement chugs along, competition could come from a bunch of directions. Operating-system providers, public-cloud providers — some of which Mesosphere’s tools can work on top of — might decide to compete against Mesosphere, rather than merely integrate with it. VMware, a leading seller of software for managing the deployment of applications in data centers, and companies with distributions of the OpenStack open-source cloud software might also start giving some thought to challenging Mesosphere. (Note that just a few days ago, VMware said that it would integrate its software with Mesosphere’s technology.)

Nearly 40 people now work for San Francisco-based Mesosphere, and the headcount should reach 120 by the end of 2015 — kind of a lot for a startup that began just a year and a half ago. Then again, as Leibert put it, “we have a hard problem to solve.”

Khosla Ventures led the new round in the startup, which has now raised a total of $48.85 million. Andreessen Horowitz, Fuel Capital, and SV Angel, among others, also participated in the new round. Mesosphere announced a $10 million round just six months ago.