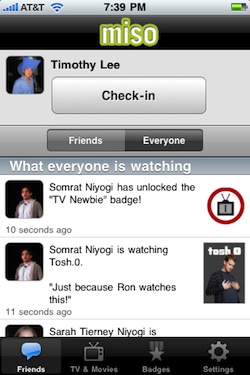 Bazaar Labs, the startup behind an iPhone application that lets users share what movies and TV they’re watching, just revealed the addition of one more investor in its seed round: Google Ventures.

The San Francisco company’s app is called Miso and applies location-based startup Foursquare’s model to movies and TV. Users “check in” by saying what they’re watching, then win badges based on their viewing activity. It just launched a Miso Web app for participating from your laptop or desktop computer. And an iPad version is supposed to be coming soon.

Bazaar Labs already announced its seed round a week ago. (Disclosure: One of the company’s backers is Georges Harik, who also invested in VentureBeat.) Joe Kraus, the Google Ventures partner who previously cofounded Excite.com and Jotspot, made the new investment.

Google itself is looking at other opportunities around television with the planned launch this fall of Google TV, a system for accessing the Web on your TV.