Chicago’s MobileX Labs says it is bringing low-cost democracy to the app store. The company just announced $1.5 million in seed funding to move the needle forward as it launches a beta of MXL Build, a DIY development environment that requires no coding experience. Mobile application targets include both iOS and Android.

The seed round is led by Gary Holdren of The Garland Funds. Start-up investment luminary (and ABC TV Shark Tank star) Mark Cuban also supports the firm. “I chose to work with the MobileX team because it was clear from the beginning that they are a smart group of entrepreneurs driven to succeed in their mission to democratize the app store,” said Cuban in a press release.

The seed funding is a mere 10 percent of the amount the company plans to seek in about a year. As founder and CEO Dan Novaes told VentureBeat, “We already have a solid stream of positive cash flow and decided it would make sense to raise outside capital in order to better grow our team and further develop our product.” MobileX Labs claims 31 full-time employees and, in private beta, has accumulated more than 20,000 users.

Novaes is using the seed funding to open a public beta of the MXL Build app builder software “in the next few months.” If DIY customers pile on, as expected, Novaes says “we are capable of handling a large amount of users at a time because our process is highly automated.”

The company expects interest from many quarters, and singles out musicians and other creatives. “Our product primarily caters to content creators (musicians, websites, photographers, events, etc.) and small businesses (gyms, venues, restaurants, for example)”, said Novaes. “Anyone looking to have a mobile presence, but not ready to deal with the all the issues associated with app development. There is absolutely no technical knowledge needed to use our software. It’s as simple as creating a Facebook page.”

You might be a dentist who wants to give orthodontic patients a scheduling, alerting and care app since lots of office visits will be involved in the treatment process. You realize that other dentists might actually pay for the app. If only you could build it without first getting a degree in computer science and mastering C++ and Java.

Another example: You’ve got an entirely new kind of game in mind, something different. “If only I could do this and that, it sure would be interesting.” Using a highly abstracted design tool, no coding involved, you just might succeed. Maybe you’ll be among the first to succeed with a human virtualization app that sounds and acts like Scarlett Johansson in Her.

MXL Build is the latest in a long list of DIY apps aimed at smartphones. However, the product is substantially unique, claims Novaes. “MXL Build differentiates itself from other app builders in a variety of ways. We are the first 100 percent free native app builder. Not one quality app builder allows you to create native apps for iPhone, iPad, and Android and push them to the major markets without paying some sort of fee. (MobileX Labs website offers a free plan and a $49 per month plan that includes support and rich tools).

“In addition, our apps are 100 percent native (we do not use hybrid front end software to replicate the look and feel of native mobile); the level of quality and design… vs. others is like comparing a BMW to a beat up Honda. We integrate with 50+ technologies and modules which gives our product a high degree of versatility. Lastly, our build process is the most automated in the space. We do all the heavy lifting for our users with our one-of-a-kind build process. Users can have a beautiful full-blown app for both platforms in as little as 5 minutes.”

Novaes said his chief competitors include Biznessapps and Infinite Monkeys. “Biznessapps.com is a well-known app builder, however, you can see from their site and their app design that it feels and looks clunky. The build process is quite a drag as well,” he said, adding that Infinite Monkeys, while inexpensive, “is filled with … forced ads and restricted market publishing.”

Finally, for the celebrity community, Novaes pointed to MobileRoadie as a competitor. “While touting fame from a few celebrity apps created by their developers, the DIY app builder is one of the priciest in the market, and not geared towards the average consumer.” 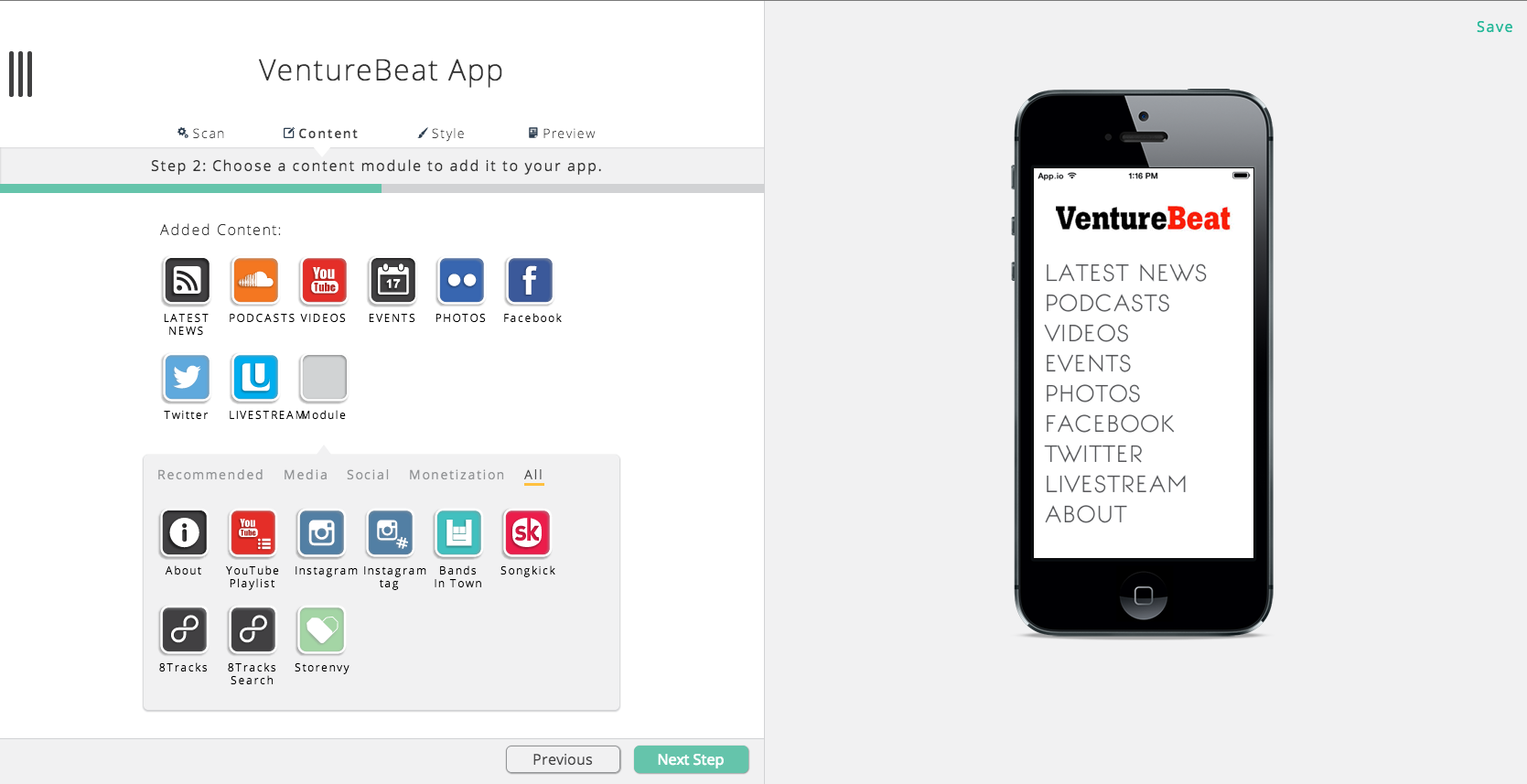