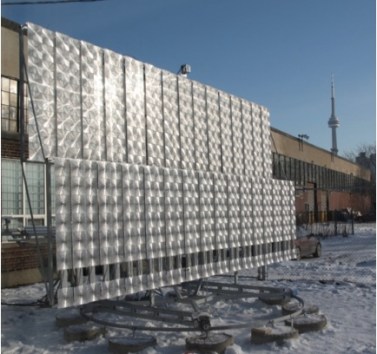 Solar startup Morgan Solar plans to announce Thursday that it has raised $16.5 million in venture-capital funding. After declines in the second half of 2010, U.S. cleantech investment has been on the rise so far this year, with solar companies getting the most money, analysts say.

Founded in 2007 by company president John Paul Morgan and his brother Nicolas, Morgan Solar has developed a concentrating-photovoltaic technology that it claims can convert more sunlight into electricity at a lower cost than competing technologies. The technology involves staggered rows of thin, hexagonal optics that direct light to triple-layered solar cells positioned at the edges of the rows.

The company says the initial commercial panels will be able to convert sunlight into electricity with 25 percent efficiency, which is higher than most conventional silicon-based panels but lower than some other concentrating PV technologies. Even at its current low volumes, its cost is on par with that of traditional panels, Morgan told us in an interview, adding that the company expects to be able to deliver a levelized cost of energy – meaning the total cost of energy, with everything included – competitive with that of thin-film solar in many markets by 2012.

Still, he acknowledged the company faces plenty of challenges in the next year to make that happen. “I don’t want to stop at just being better than solar; I want to compete with coal,” he said. “A lot of things have to be executed correctly – we have to ramp up right and drive down this plan of bringing costs down and efficiency up.  … The details are what are going to make us take this to the next level. And the details are where we’re at now.”

Morgan Solar’s latest deal is the first tranche of its second round, which the company expects to close with $25 million in the next few months, company president John Paul Morgan told us.

“2011 and 2012 are going to be the most important years in this company’s history,” Morgan said. “This year, when we’re really demonstrating [our product] in the market, taking it to customers and deploying it on a large scale, is really going to be what tests the mettle of the team and of the company and demonstrates to the world how big of a deal this all is.”

Morgan Solar ran into some speed bumps during its internal testing last summer, when it discovered some issues that could result in some defective panels, he said. “We’ve ironed all that out,” he said, adding that he now expects the panels to get international certification by early next year.

The company plans to use its newfound cash – along with its $3.3 million loan guarantee – to grow its optics factory in Chula Vista, Calif., which Morgan said is on track to begin production in the next few months. The factory already has some of its equipment in place and will initially have the capacity to produce 5.5 megawatts a year, then will expand to 50 megawatts of annual capacity by the end of next year, he added.

The 50-megawatts of capacity near San Diego will cost $13 million, Morgan confirmed. “We can ramp up much more cheaply than other companies,” he said, adding that most of the company’s first-round funding went into research and development, lab equipment and testing equipment, not capital expenses. “That’s why we’re not trying to raise $100 million.”

Morgan Solar will also use some of its new capital to expand its panel assembly, as well as research and development – including testing, engineering and design work – at its Toronto headquarters, Morgan said.

The deal brings the Toronto-based company’s total private capital to $26.3 million. It also has received $10.3 million in U.S. and Canadian government funding, and has won a $3.3 million loan guarantee from the California Energy Commission.