High-value financings for venture-backed private internet and digital media companies seem to be happening at a rapid pace. Dropbox, Tumblr, AirBnB, Foursquare, and Spotify have all raked in big fundings and attained record valuations in recent months. Meanwhile, public investors are decidedly less sanguine. The Nasdaq Composite index is flat for the year – and the average internet and digital media company is down 50% from 52-week highs.

So why such a disconnect? Will the recent class of high-priced venture rounds produce strong results for entrepreneurs, VCs and LPs? Or, will the public market continue to bump along and provide little opportunity for spectacular exits?

Pondering this conundrum, I stumbled onto a very interesting graphic put together by Jose Cobos and his colleagues over at investment banking firm Cowen and Company. 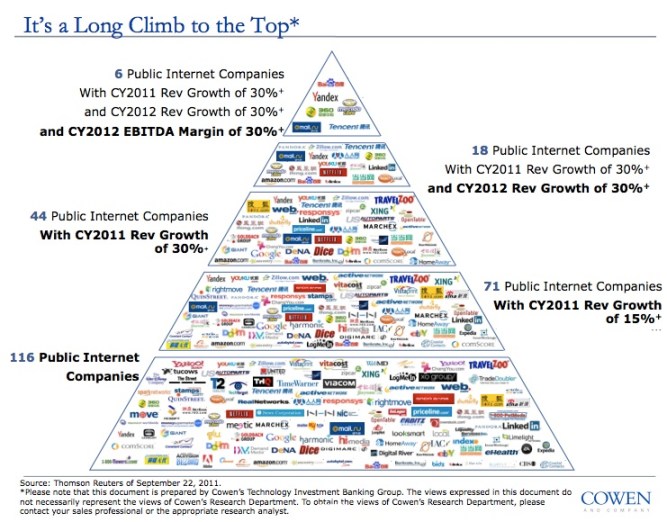 Let’s take a further look at these six companies: Baidu, Tencent, Yandex, Mail.ru, Qihoo 360 Technology, and MercadoLibre. What do these companies all have in common?  Most obviously, they all operate outside the U.S. Second, they are being richly rewarded by public investors – all six are presently valued at at least 10x revenue – a very meaningful premium over the group of internet and digital media companies as a whole, where median revenue multiples fall in the 1-3x range, depending on subset.

Relaxing the 30% EBITDA margin constraint, 12 more companies are projected to have at least 30% growth in 2011 and 2012, so the total number of “high-performing” public internet companies is 18. Scanning this group, you’ll see that most of the companies are still highly valued – LinkedIn, Zillow, and Youku, for example, all enjoy very high revenue multiples as well. But, the overall average revenue multiple is lower than the top tier.

Dropping even further, to the 44 companies projected to have at least 30% growth for 2011 alone, the valuation picture is far murkier, with several companies being valued much closer to the 1-3x revenue group median.

For CEOs of high-growth internet companies thinking about IPOs, this chart provides a very clear case for how to ensure success as a public company. The market will reward high growth (30% or more for several years into the future) coupled with high rates of profitability. If you can’t see a way to achieve both growth and profitability, you may not achieve a premium public valuation and should plan accordingly.

And remember, the most interesting common trait of the six companies in the top tier is that they’re non-US businesses based in China, Russia, and Latin America. Producing both growth and profitability is a time-tested winning strategy to attain high public market valuations. Lately, as several foreign economies have been on a rapid growth curve, a crop of non-U.S. startups has been particularly good at producing both. Perhaps U.S. entrepreneurs seeking high growth and high profits would do well to look outside the U.S. — expanding their businesses into high-growth markets.

For venture investors, this chart is also telling. Big fundings for companies that don’t show promise for delivering both high growth and significant profits may produce poor investment returns on the public market. As the chart says, it’s a long climb to the top – and very few internet companies will reach the peak. Unless the percent of companies able to summit goes up substantially over the next few years, many of today’s high-priced venture investments may falter when it’s time for the public to decide their value on the open market.

Glenn Solomon is a partner at GGV Capital, a $1B  venture capital firm with a dual focus on China and the U.S. Some of GGV’s investments include Alibaba Group, Pandora Media, YY, Buddy Media, Tudou, SuccessFactors, Square, and 21ViaNet. Glenn blogs at http://sandhillrdmeetswallst.com.