NuOrder, which connects brands and retailers to optimize inventory and orders, today announced funding of $8 million. The round was led by Argentum, with participation from returning investors Upfront Ventures, Greycroft Partners, Cowboy Ventures, Novel TMT, and Box Group.

“B2B ecommerce is widely different than B2C,” said cofounder and co-CEO Heath Wells, in an exclusive interview with VentureBeat. Wells cofounded NuOrder with his wife Olivia in Los Angeles five years ago. “We found that the business side of ecommerce was a huge opportunity, as there was a lack of innovative technologies trying to solve issues like fax machines and trade halls.”

Brands subscribe to NuOrder’s software as a service (SaaS) on an annual basis to create a digital catalog of their merchandise. They can also integrate with 100 different APIs to customize  orders, inventory, price sheets, and more — these include SAP, NetSuite, and Microsoft Dynamics. 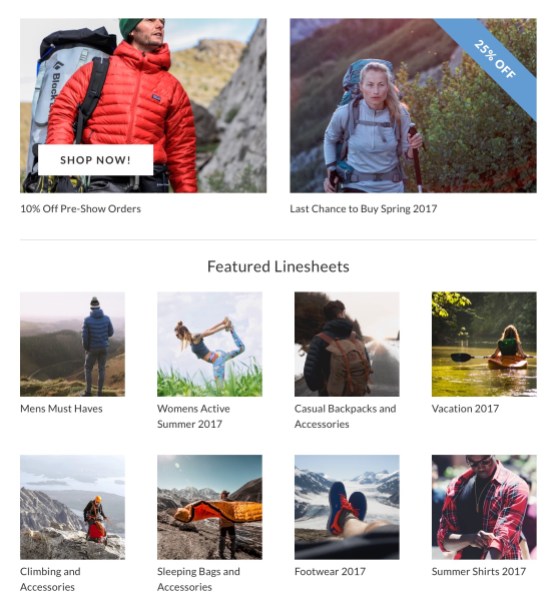 Above: Example of a NuOrder digital catalog

On the retailer side, large sellers like Amazon, Net-a-Porter, and Nordstrom are invited to view and order the merchandise through NuOrder’s digital catalog. The LA-based startup claims to be working with 300,000 retailers.

Other startups competing in the B2B ecommerce sector include Joor and Handshake.

NuOrder’s platform is currently available on the web and iPad. Wells argues that it is difficult to find a mobile, user-friendly interface for enterprise software, but he told us that the startup is working on an iOS app.

In addition to working on the mobile application, NuOrder will use today’s fresh injection of capital to further develop its product and expand into other markets. “Thirty percent of order volumes come from outside of the U.S.,” said Wells.

The startup has raised a total of $21.9 million to date and claims to be cash flow positive since last year.