Nyriad has raised $8.5 million in venture capital for its resilient storage systems that are accelerated using graphics processing units (GPUs). Those storage systems are built to handle problems such as the simultaneous removal or failure of 20 hard disks at the same time.

The Cambridge, New Zealand-based company has now raised more than $11 million to date for its Nsulate software for managing large-scale storage arrays in data centers. The company is targeting the release of its first product in the first quarter of 2018.

“I am thrilled by the support we have had from both the local and international investment communities,” said Nyriad CEO Matthew Simmons, in a statement. “Nyriad has a unique business proposition powered by a bold vision. This capital raise gives us the resources to achieve the next stage of our commercial objectives, so I personally thank all who made this funding round a success.”

Nsulate is a GPU-accelerated block device that manages the storage array in Linux. The GPU does the resilience calculations and error correction for very large amounts of storage that operates at very fast speeds. Nyriad’s chief technology officer is Alex St. John, a well-known techie who co-created DirectX graphics technology for Microsoft in the 1990s. 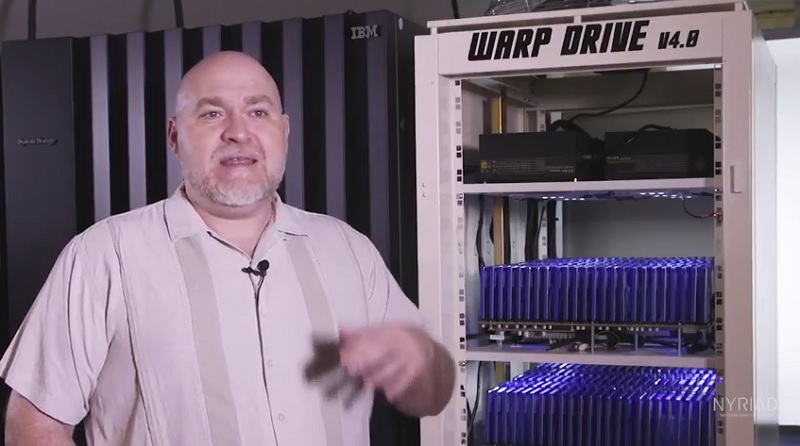 Above: Alex St. John is chief technology officer at Nyriad.

Nyriad demoed the system with 432 hard drives in a single storage array, and it turned off the switch on 72 drives while the system was running. The system tolerated the loss of the drives, as the GPU repaired the missing data in real time.

Nyriad showed off the Nsulate at SC17, a supercomputing show in Denver, Colorado, in November. The company believes its Nsulate tech can make traditional RAID storage controllers, first designed 25 years ago, obsolete.

NZVIF CEO Richard Dellabarca said in a statement, “This is another example of a New Zealand company developing exceptional technology for a global market and in an area exhibiting vast scale and rapid growth. Although it is a young company, Nyriad is already involved in major global projects and is gaining traction with large international customers. We are pleased that NZVIF and other investors have been able to support the company with capital investment at this stage.”