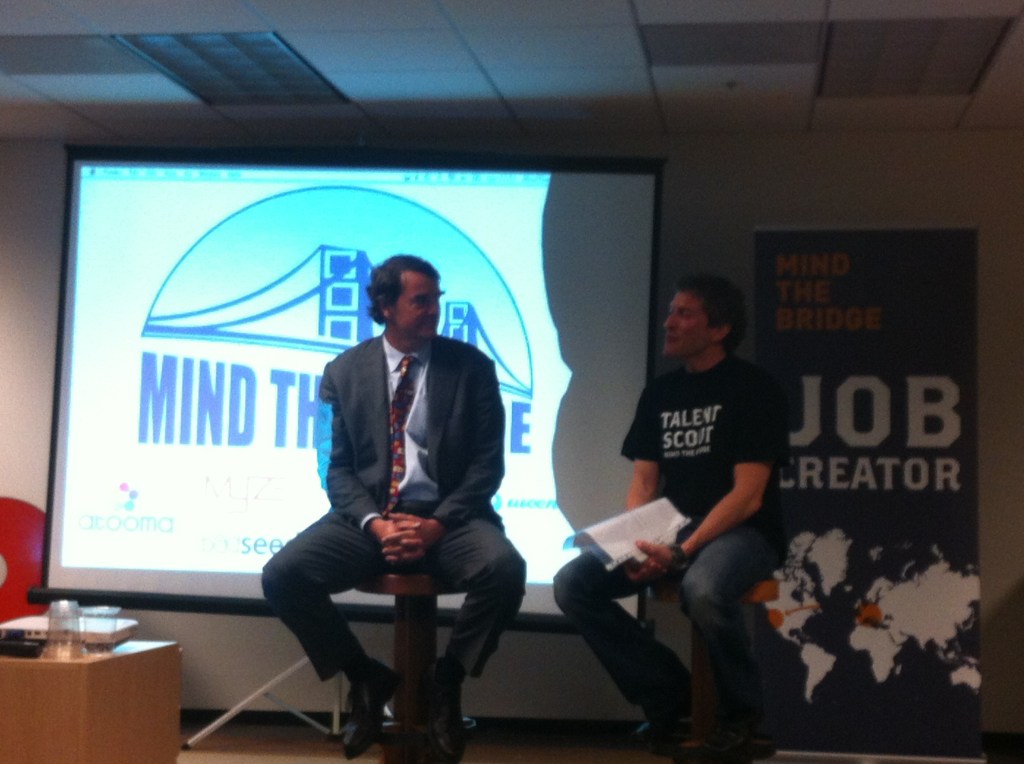 SAN FRANCISCO, Calif.-  Never separate an Italian entrepreneur from his coffee. That was one of the key takeaways, among others, at Mind the Bridge’s first ever demo day.

Mind the Bridge is a seed fund and accelerator that supports Southern European entrepreneurs from distressed economies, with a focus on Spain, Italy, Greece, Israel. The program helps entrepreneurs set up headquarters, establish a network, and gain exposure for their product in the U.S.

“It used to be there wasn’t good communication and no good way of breaking down international barriers to get all the ideas coming from different parts of the world,” said storied venture capitalist Tim Draper, in an interview with VentureBeat. “Now, I see things from Italy and Southern Europe and they look just like things in Silicon Valley. With the spread of viral marketing and information, and the connection we’ve all got with each other, the ideas are generally based on the same information. These startups are competing head-to-head.”

Draper kicked off the demo event, which featured presentations from six startups. Each of the companies participated in Mind the Bridge’s three-month accelerator program and received coworking space and guidance from mentors who understand the unique position of foreign entrepreneurs. Founder Marco Marinucci advocates a “dual-company model,” whereby development stays in the home country, but headquarters are in Silicon Valley, where the market and the money is.

“These entrepreneurs have a strong sense of creativity that is generally more pronounced than locals and easier and cheaper access to talent,” he said in an interview after the pitches. “Our startups all have a product launched and proved in different geographies, but the bigger challenge is to make it in biggest costumer market in the world- the U.S.. The market here is incomparable. This way you can play the big game of the mass market and find funding here, while maintaining all the development abroad. This is the model that I see working.”

Each of the presenting startup have built consumer-facing startups that span a range of sectors. Italian Atooma is a smartphone app that lets you set up conditional events that automatically trigger simple actions based on things like time of day, location, and favorite apps. Myze is a Spanish-based service that helps consumers collect and maximize their credit card rewards to access discounts, promotions and deals. Bad Seed is a gaming company from Italy developing mobile games that achieve ‘the quality of console games.’ Weendy is a social ‘sports mate’ application where surfers, skiers, kite boarders etc… can share information on weather conditions. The founders are from Greece. Also hailing from Italy, Map2App is a web-based platform that lets travelers create custom mobile travel guides to access on-the-go, and in3Dgallery’s technology turns 2-dimensional content into dynamic 3D presentations.

In true European form, the presentations were punctuated with breaks for h’or dourves, pasta, coffee, and cookies, and the entrepreneurs all seemed remarkably at ease. The event did not have the same level of tension or anxiety that often pervades the room at demo days, and the founders seemed just as eager to chat with each other as with potential investors. Marinucci said European entrepreneurs often have a different attitude than locals, and the Mind the Bridge community is a supportive, rather than a competitive one. ”

“There is a more social attitude, he said. “It takes an immigrant to understand an immigrant and the nitty-gritty of the challenges you face. Everyone has different nationalities, but they all have similar issues, and that makes them a tighter community.”

Mind the Bridge was founded in 2007 as a side project while Marinucci worked at Google. It was first conceived as a non-profit accelerator program dedicated to developing Italy’s startup ecosystem, but has grown to encompass a wider geographical scope and includes a seed fund and startup school. Today’s startups were the first to graduate from the accelerator program, but they won’t be the last. Marinucci plans to make between 12 to 15 seed investments a year of between $40,000 and $100, 000 and is raising a second fund. Read more on VentureBeat.