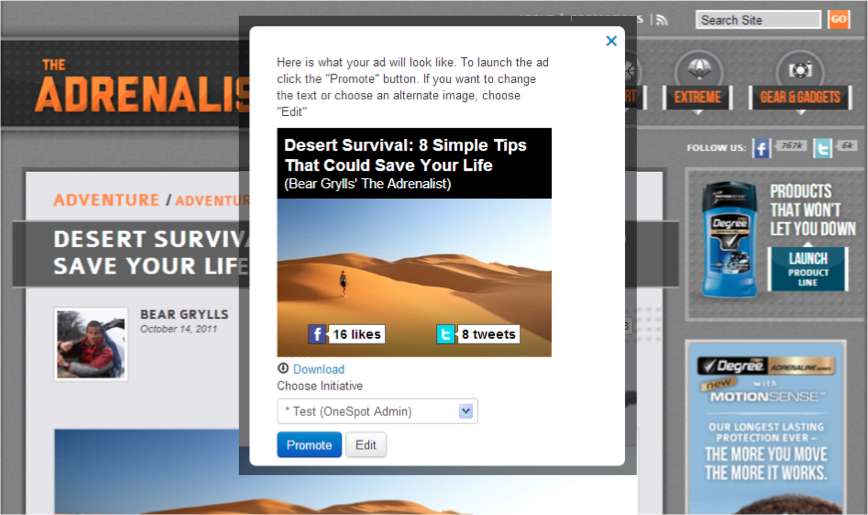 The problem with most digital display advertising is that it’s rarely as compelling as the content it runs besides on a webpage.

OneSpot, a new advertising startup that launches today, thinks it can fix that problem by converting news articles, reviews, and blog posts into display ads.

The service essentially takes a link from an outside source, and refits it to the specifications of an ad. Founder Matt Cohen walked me through the process, which appeared to be very similar to what you’d find when sharing a post on social networks like Facebook, LinkedIn, or Google Plus. Each add contains the post’s artwork and headline, although if you have concerns over the chosen photo, there is an option to swap out something different.

So for example, if I wrote something particularly favorable about a service or product that a company liked and wanted to share, it can now go a step further than just posting my article on their Facebook page or tweeting it out over Twitter. Now, those companies can re-purpose my content as an ad, which will drive traffic to my post and spread the word to potential customers. Of course, there is something a bit unsavory about non-commercial content getting used as an advertisement, but its nothing new. This just happens to make the process simpler.

“We’re not doing anything that isn’t already being done on Facebook and Twitter,” OneSpot founder Matt Cohen told me in an interview Friday. He added that any publisher that does have a problem with their content being used can request that it be taken down. Honestly, I don’t know many publishers that will complain about getting new traffic though.

The real power of OneSpot lies in its ability to plug its advertising into various platforms like Google Adwords, Facebook, and others. Clients set a budget for their ads based on a particular set of parameters (gender, location, age range, etc.), and the OneSpot service will assess the best ad platform for the money. It also tracks all of ads and offers reports to its ad clients.

The Austin-based startup has about 20 clients at launch, and has raised a new $1.5 million round of funding from RSL Venture Partners, 500 Startups, Ralph Mack, Mike Maples, Sr., Josh Baer, and others.