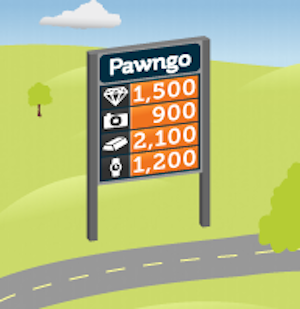 Pawngo, which was previously named Internet Pawn, aims to fulfill a need in the market for short-term loans between $1,500 and $15,000.

With so many people facing financial hard times at the moment, an online pawn shop does make a lot of sense — especially since low credit scores wouldn’t prevent someone from a loan the same way it would if attempting to get money from a bank.

The service works by having customers supply information about items they wish to pawn. Within an hour, the company’s Denver-based valuation lab returns an estimate just like a traditional pawn shop. If the amount is satisfactory, the customer ships the item to Pawngo’s vault for a period of  three to six months (depending on the loan agreement).

Pawngo makes money through a “monthly option charge”’ equal to three to six percent of the loan, which it debits directly out of a customer’s bank account. If a customer chooses not to pay back the loan within the allotted time, the company resells the item to recuperate any loss.

Some have noted that the shady nature of Pawngo’s previous incarnation, which required customers to send in their items without getting an estimate on how much the loan amount would be, may still linger on the latest version of the site. But however questionable the service may be, it’s still a way for people to get money quickly and likely won’t be what holds the company back from being successful.

One factor that could hold Pawngo back is scalability of the storage “vault” where all pawned items are kept and the workforce assessing estimated resale value of items, which may be an issue as the service grows in popularity.

Scalability is something that group-offer site Groupon has done very well but, that doesn’t necessarily translate into profitability. Founders Lefkofsky and  Keywell, washed their hands of the startup after realizing Groupon’s large-scale operating costs were not sustainable. If Pawngo can manage its growth, it may have a chance at becoming the next big online financial platform.

The new round of funding, Pawngo’s second, brings the company’s total funding to $4.5 million since launching in August 2009. The company claims to have loaned out a total of $1,377,360, according to the ticker on its website.