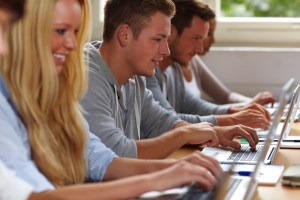 Piazza, a social network that connects students to their professors, raised $6 million in its first round of funding, the company announced Friday.

Piazza is a social network and “online gathering space” that encourages student collaboration under the guidance of professors and teaching assistants. Students can ask their professor questions regarding assignments, collaborate with fellow students on projects and engage in discussions day or night.

“The inspiration [for Piazza] started with the idea to emulate face to face collaboration among entire classes, as if students were all sitting together in a library working together,” Pooja Sankar, founder and CEO of Piazza told VentureBeat.

Students can connect with Piazza’s online dashboard, and with dedicated iOS and Android apps. Piazza emerged from beta in January and has been adopted by many universities, including Stanford, Georgia Tech, Berkeley, MIT, Cornell, Harvard and Columbia.

“Many universities employ course management systems, but after one semester using Piazza they’ve noticed it’s far more superior to what they already have” said Sankar. Course management systems, such as Blackboard, often focus on assignment postings without much social interaction. Piazza aims to move away from static message boards, open up discussion between students and teachers and increase course engagement.

“With the funding we plan to increase our user base, further build on our platform and increase social interaction features,” noted Sankar. Piazza also plans to bring its social network to more schools and universities in 2012.

Bessemer Venture Partners led the round, with participation from Kapor Capital and Felicis Ventures. The company has also been funded by Sequoia Capital and SV Angel investors. Piazza launched in 2009 and is based in Palo Alto, California. Currently it has 10 employees and has raised more than $7 million to date.