“Big data” isn’t just numbers — companies have oodles of text-based data they need to make sense of and put to good use, and Luminoso is on the case.

Today, Luminoso announced that it has raised $6.5 million as its first found of institutional funding.

Luminoso is like a translation service; it takes a bunch of unstructured text and turns into numbers and trends for its customers. As it currently works with large companies, mostly in food, retail, and some tech such as REI, Sony, and General Mills, it’s been helping them analyze customer sentiment.

It’s two main offerings are a dashboard product that displays various analyses of the customer data, and an application programming interface for integration into a customer’s own analytics.

Luminoso’s capabilities are quite fancy: It can recognize the difference between “I find your pants disturbing” and “I find your lack of pants disturbing,” according to its website. It is also multilingual and even understands jargon. “We help people and computers makes sense of unstructured data,” Luminoso cofounder and chief executive Catherine Havasi told VentureBeat.

Unlike other similar companies, Luminoso’s models are trained to “learn about things much like a person does, not like a machine,” Havasi added, referring to Luminoso’s work to eliminate the constant need for people to train such data models in order for them to improve.

Recently, Luminoso partnered up with Sony to power its One Stadium Live project, a social network experience dedicated to this year’s Wold Cup tournament. It’s analyzing and organizing conversations from fans on Twitter, Facebook, and Google+ in real time.

Interestingly, the team noticed that in between the soccer matches, people discuss player lineups, club teams, and so on, but during the actual games, “it gets really emotional; people really don’t talk much strategy during the game,” said Havasi. Luminoso plans on taking its World Cup model and turning it into a consumer product that others will be able to use to analyze similar data.

Acadia Woods led this round of funding, with Digital Garage also participating. The company’s main reason for raising new funds is to fuel its growth. It will hire a vice president of sales and expand its team. Luminoso launched out of MIT’s Media Lab in 2010 and was founded by Dennis Clark, Jason Alonso, Rob Speer, and Havasi. It is based in Cambridge, Mass., and previously raised $1.5 million in seed funding from angel investors in 2012. 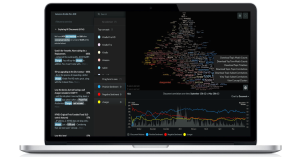