Quora is known for being an under-the-radar company. But in an exclusive interview with VentureBeat, cofounder and CEO Adam D’Angelo announced that Quora has raised an additional $85 million in a round co-led by Sam Altman, on behalf of Y Combinator Continuity, and Collaborative Fund. Previous investors Tiger Global, Matrix Partners, and Dustin Moskovitz — one of the cofounders of Facebook —  also participated. The fresh capital comes three years after Quora’s last round of $80 million.

Founded in 2009, the Mountain View, Calif.-based company has grown steadily over the years, unfazed by the enticing allure of startup stardom. “There’s this media hype a lot of companies in Silicon Valley go for,” said D’Angelo. “I think it gets in the way of the mission and it’s not in our culture or values. We’re just really focused on making a good product.”

Prior to starting Quora, D’Angelo was the chief technology officer at Facebook — he knew Mark Zuckerberg from their time at the Phillips Exeter Academy. Since leaving the social network powerhouse in 2008, D’Angelo’s core mission has been to try to get knowledge onto the internet that’s not already available. 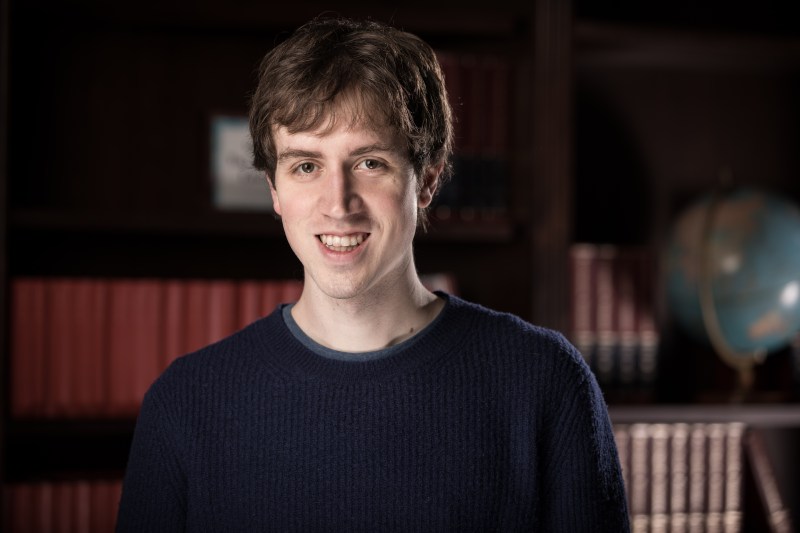 Above: Cofounder and CEO of Quora, Adam D’Angelo

And it seems users are responding, as the platform currently has 190 million monthly unique visitors, according to D’Angelo. The user base has nearly doubled since he last reported the metrics a year ago.

Until 2016, Quora only supported the English language. That changed when the company introduced a Spanish version of the service last August. And just a few weeks ago, Quora added a French version, which is currently in beta mode by invite only. For new users of Quora, the platform considers several factors, including their IP address, to guess which language they prefer. So if you’re in Mexico when you visit Quora for the first time, it’s likely you’ll get the Spanish version. At any point, however, Quora users can choose to switch to another language (Spanish to English or vice versa for now).

D’Angelo believes translating Quora helps democratize information online. “The English ecosystem on the internet is very strong, as there are various blogs and forums out there,” he said. “When you go into some of these other languages, however, there’s really not as much.” That’s why this year Quora is adding two new languages — Italian and German. When asked about a Chinese version, D’Angelo answered: “It’s very hard for U.S. internet companies to make it in China.”

Competition-wise, Quora is often compared to Wikipedia, even by our account. But D’Angelo doesn’t view the online encyclopedia as a direct competitor. “We’re trying to be a primary source of information, and they’re a secondary source,” he said. “And Quora is more about people’s opinions and analysis rather than factual information.” Of course, there are other discussion platforms out there, such as Reddit and Jelly, which was recently acquired by Pinterest. Quora’s direct competitor, however, is most likely Yahoo Answers Now, which has more than 300 million monthly users.

Last year, D’Angelo answered a question about Quora’s user base, explaining that the company doesn’t focus much on these numbers because it usually optimizes for quality, which comes with a tradeoff against volume. Rather than burn cash and scale too quickly to show off inflated metrics, the company says it has been cautious when deploying new products. And the quality of the content shows.

In addition to implementing stricter rules to ban bad actors from the platform, Quora has put in place a series of carefully curated editorial formats, which include “Writing Sessions.” World leaders such as former Secretary of State Hillary Clinton, former U.S. President Barack Obama, and more recently, Canadian Prime Minister Justin Trudeau, have all been hosts and answered questions. Other noteworthy contributors include venture capitalist Vinod Khosla and Facebook’s Sheryl Sandberg. 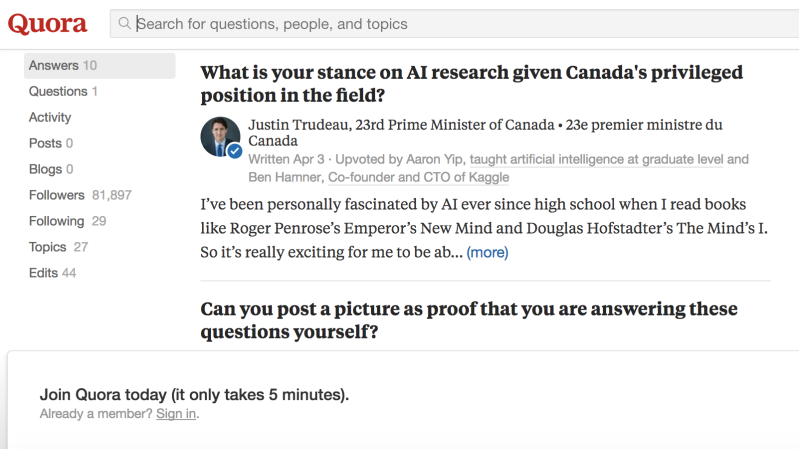 Investors in the Valley apparently believe Quora is a good bet and seem to trust D’Angelo’s steady leadership. Backers include Benchmark Capital, Peter Thiel, and Y Combinator (Quora is a YC alumnus from 2014). The company has raised a total of approximately $235 million to date.

The fresh money will be used to expand the platform internationally, grow the business side, and make new hires, especially machine learning engineers, to help personalize the content users see. A spokesperson for Quora said its valuation has nearly doubled since the last fundraise, at which point the company was valued at about $900 million post-money.

Today’s funding announcement begs the question of when Quora will file for an initial public offering (IPO). “Our goal is to be a long-term, independent company,” said D’Angelo. “We expect that we will go public at some point.” One indication of a gradual shift into exit mode is the implementation of a self-service advertising model on Quora. “I think ads is a very good way to be a sustainable business and become cashflow positive,” said D’Angelo. “And it’s very compatible with our mission to provide a free service to everyone in the world.”

With this model, Quora is clearly distinguishing itself from the likes of Wikipedia — which chose to be a nonprofit — following instead in the footsteps of Google and Facebook, both of which have thrived off the digital ad industry. Quora has been experimenting with this self-service ads model for a few months now and will be launching it out of beta in the coming months. The company declined to comment on ad performance at this point.

Quora’s recent hires also suggest a future IPO. Shortly after its head of business and community, Marc Bodnick, left last year, the company went on a hiring spree. In the past six months, Quora has recruited a group of powerhouse women, including Kelly Battles — who is on the board of trustees of the Wikimedia Foundation — as Quora’s first chief financial officer (CFO), and tapped Karen Kramer to be the company’s first general counsel. Other hires include Helen Min, Quora’s first head of marketing (who joined from Dropbox), and Tami Rosen, who will be joining from Apple in May as vice president of people, responsible for HR and recruiting.

Quora also made its first acquisition last year when it brought on the founding team of Parlio*, a platform where invited members could share their opinions and analyses in a civil way. When asked whether the company plans on making additional acquisitions, D’Angelo said: “We’d be open to it.” The company currently has 190 employees.

Quora is a goldmine of information, answering a range of ingenuous questions, from “Is it ok to have crushes everyday?” to more serious ones like “What should governments do to prepare for the technological automation of human jobs?” Before ending the interview, I asked D’Angelo which question had struck him the most on Quora. “One of the things that really stuck with me was the question about what it was like to be in the World Trade Center during the September 11 attacks,” he said. “There were a bunch of people who were in the towers that wrote some answers. It was both scary and fascinating to read.”

*Editor’s note: The author of this story has previously written for Parlio.