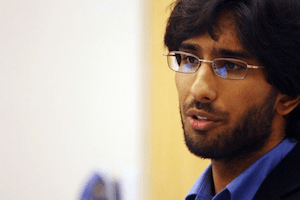 San Francisco startup Rapportive announced today that it has enlisted a long list of well-known investors as part of a seed round of more than $1 million. Given Rapportive’s aim to provide relevant information about your contacts in Gmail, the most impressive person on that list is probably Gmail creator Paul Buchheit. He’s an angel investor and now a Facebook employee via the acquisition of his company FriendFeed.

There are a number of other startups built around the goal of providing more relevant data about your email contacts — in Rapportive’s case that data includes your contact’s photos, location, and LinkedIn profile. Chief executive and cofounder Rahul Vohra (pictured) said Rapportive is distinguished from other products by being genuinely easy-to-use and beautiful. Comparing Rapportive to a more-established competitor that has had some performance issues, Vohra said that in some ways he wanted to create “the anti-Xobni.”

The team started working on the product in January and launched the first version in March. Tens of thousands of people signed up in the first 24 hours, and “many more tens of thousands” signed up since, Vohra said. He didn’t want to discuss future product plans, except that Rapportive will be pursuing some form of a “freemium” business model, where some users can pay for additional features on top of the free version available now. (As a browser add-on, Rapportive replaces the advertising in Gmail with its contact data, so it would be a bit strange for the company to make money by selling ads of its own.)

T.A. McCann, cofounder and chief executive of competitor Gist, has criticized using browser add-ons as a way to improve email, so I asked Vohra whether he’s worried that creating an add-on could be limiting down the road. He responded that it has actually helped in some ways, since each of the browser makers is in competition with the others, leading them to highlight cool add-ons such as Rapportive. Installing an add-on is only going to get smoother and more seamless over time, Vohra added.