It has been 74 days since “regulation crowdfunding” (aka Title III of the JOBS Act) kicked off, and the data is starting to pour in. Regulation crowdfunding allows any American startup or small business to raise up to $1 million from friends, family, and followers on debt and equity crowdfunding platforms that are registered with the Securities and Exchange Commission.

The initial data is revealing just what advocates of the move expected:

A slow logical progression of offerings and a rational approach by investors. Unlike the gross exaggerations by the investor protection advocates, there is no sign of a Wild West here. Entrepreneurs are realizing that the regulated side of crowdfunding comes with forms, disclosures, business plans, legal fees, etc. Outside of that, entrepreneurs are coming to the realization that you need to bring your crowd to your campaign. Those that have a strong social network prior to launching are having greater success. This “slow out of the gate” start mimics what happened when Title II of the JOBS Act (aka lifting the ban on general solicitation to accredited investors) went live. Investors aren’t rushing to these deals and treating it like going to Vegas. They realize this is “patient capital” (meaning their money will most likely be tied up for 5+ years).

Three campaigns have already hit their funding targets and closed $617,000. This shows the speed and efficiency of capital formation that can be experienced by solid campaigns. A smart thing these campaigns did is they were realistic about how much they could raise. They didn’t shoot for an amount they couldn’t achieve from their social network. And being one of the first to get funded is a marketing story for themselves.

One campaign, Beta Bionics (they make a wearable medical device that autonomously manages blood sugar levels in people with diabetes), already hit the maximum $1 million funding cap from 780 investors. This provides evidence that there is appetite for increasing the maximum raise from $1 million to $5 million as per the recently passed Fix Crowdfunding Act. (The Fix Crowdfunding Act has a couple of positive additions to regulation crowdfunding, including the ability to use Special Purpose Vehicles so that all investors are represented on a cap table under one name; follow-on VCs tend to like this).

Seventy-one companies have registered their offerings with the SEC on 14 portals. Again, this shows that a regulated process brings serious issuers to the table as well as investors. That being said, the companies that have poor quality videos/offerings are raising the least amount of money. Portals have to go through a rigorous registration process with the SEC and FINRA (the agency that oversees the crowdfunding online intermediaries). Don’t expect to see hundreds of these portals.

The companies currently raising have a total of 242 employees signaling our hypothesis that crowdfunding may be a job creator. Half of the companies are less than one year old, showing that this is a viable path for startups. Interestingly, 17% of the companies are over five years old. It is generally accepted that once a company is past five years in age, it is nearly impossible to go out of business. Why are they seeking crowdfunds if they could go to a bank? Probably because they realize the marketing benefits that come from a campaign and the vested interest of backers.

California is leading the pack in both number of issuances and total capital committed. But capital is being spread around the country, and certain regions are pulling ahead of others.

My firm, Crowdfund Capital Advisors, has put together some charts on the data available so far: 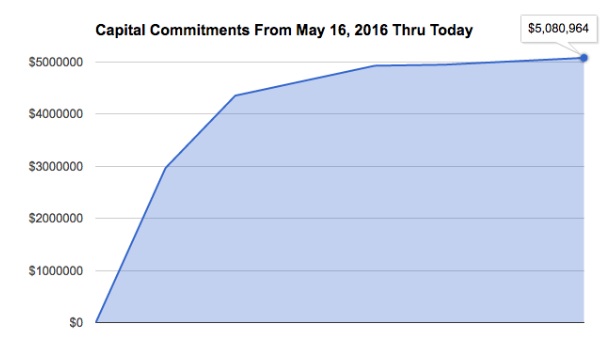 Above: The total amount of committed capital to all campaigns raising funds under regulation crowdfunding since May 16, 2016.

Over 30 campaigns went live initially, hence there was a big bump in initial capital commitments. Now we are starting to see the slow progression of commitments over time. Right now we’re seeing an average of around $50,000/day being committed. 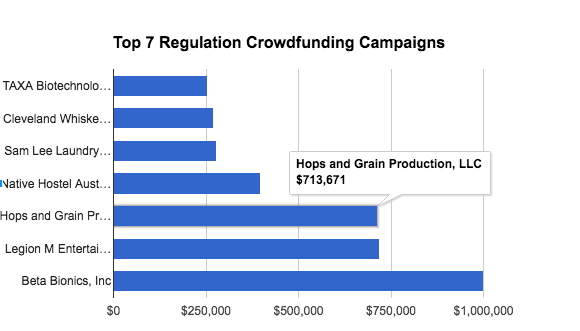 Most campaigns are far from their funding targets, but the seven in the above chart are showing significant traction. $1 million is the maximum a company can raise under regulation crowdfunding. It is interesting to see that Beta Bionics was able to do that in such a short period of time. Consider raising that kind of money from Angels or VCs in less than six months! 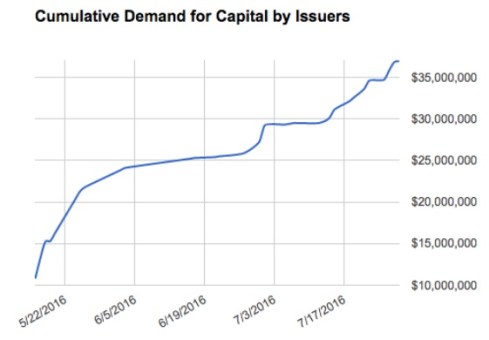 Above: The total demand for capital by all campaigns raising funds under regulation crowdfunding since May 16, 2016 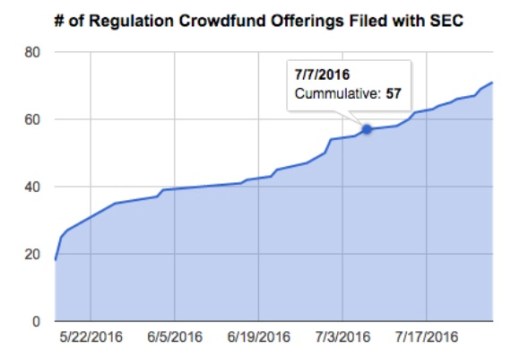 The 71 registered companies are collectively seeking $36 million, which averages out to about $500,000 per campaign goal. As mentioned above, it is better to set a lower goal and exceed it than to put a high one out there and miss it. If you exceed it (provided it isn’t over $1 million), you can keep that money (and those investors). If you miss it, all the capital commitments go back to the investors and your campaign fails.

Let’s take a look at how active various parts of the country are in the new fundraising. Hover over the following two maps to view amounts raised and number of campaigns per state.

California is leading the pack when it comes to the most campaigns and the most capital commitments. And while Texas is second, New York has more offerings but less capital committed. You can already start to see a distribution of capital/campaigns around the country, with pockets existing. Will crowdfunding help the underserved regions?

You might have thought that technology would be where investors are going, but interestingly enough they are going to Wine, Spirits, Food & Beverage. This underlines another one of our hypotheses: Where there is an engaged community of investors for a retail business that they can visit (and bring their friends to since they are investors in that business), capital will flow into these campaigns. The tech companies will most likely use a successful crowdfunding campaign to seek follow-on investment from angels or VC. 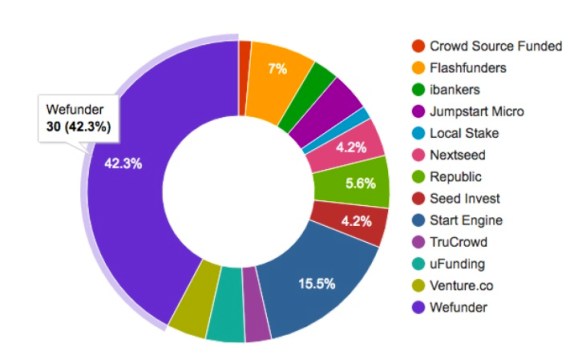 Above: Proportion of offerings per fundraising platform

Want to try your hand at regulation crowdfunding? Then start by checking out these funding platforms above. Wefunder is leading the pack, with the most offerings and most capital raised. But new entrants like Republic (an offshoot of Angelist) aim to make a claim. Compare the types of campaigns they are offering. Look at which ones are successful and, more importantly, which ones aren’t. Study the differences before you launch you campaign in order to improve your chances of success.

The above charts are updated daily here.