[UPDATE 10/12/2019: This story contained significant errors. Corrections have been marked below. Thanks to Jeff Moss for bringing the issues to our attention.]

Regulation Crowdfunding allows startups and small businesses to raise up to $1,070,000 online per year from both retail and accredited investors by using registered funding portals (or broker-dealers). Issuers are required to file a Form C with the Securities & Exchange Commission (SEC) and post online disclosures about a company’s operations, team, financials, and other material information for investors to review. 2018 marks the third calendar year for the industry, and data from the past three years show traction is starting to pick up.

2018 saw growth in unique offerings, proceeds, and investors. More importantly, startups are successfully using Regulation Crowdfunding to raise meaningful capital in a relatively short period of time and at costs that are less than a typical Regulation D offering.

Unlike venture capital, where less than 6.5 percent of startups successfully raise funds, the success rate in Regulation Crowdfunding hovers around an impressive 60 percent. A key data point for industry followers is that the average raise ($270,996) helps startups hurdle the “valley of death” they often face after expending their internal or personal capital.

Regulation Crowdfunding is proving to be a jobs engine (creating on average 2.9 jobs per issuer), economic generator (pumping over $289 million of revenues into local economies) and industry supporter (enabling 82 unique industries in regions across the USA). Data from annual reports also shows that capital received from the crowd may contribute to year-to-year increase in corporate revenues. This may be due to the vested interest the crowd now has in these firms, which leads to a form of “crowd marketing” on behalf of the issuer.

Here are some more of the key findings from 2018’s Regulation Crowdfunding data: 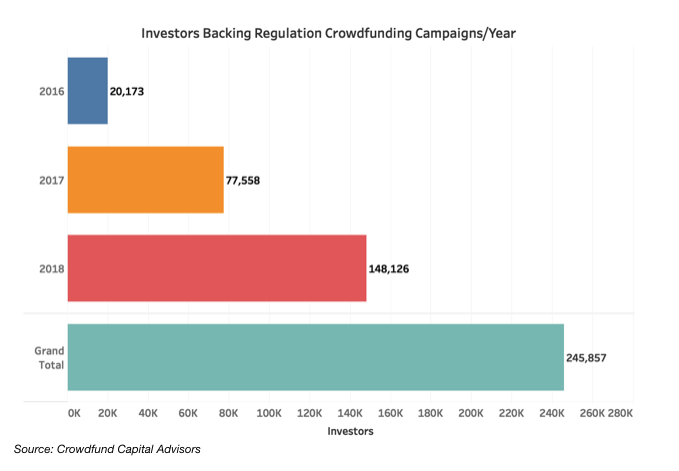 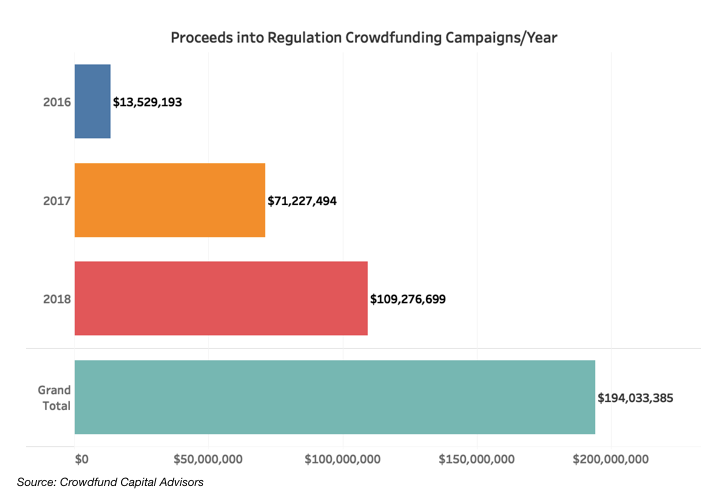 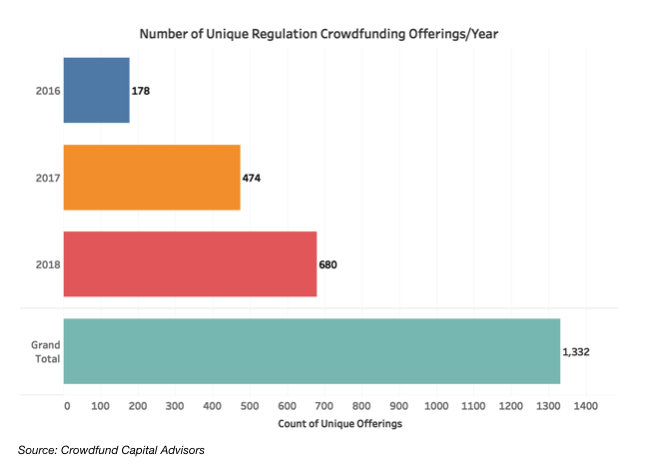 What does it all mean?

The overall Regulation Crowdfunding market is still in its infancy. We are still waiting for the inflection point at which issuers, investors, and dollars grow exponentially. But the year-to-year growth in unique offerings shows the market is continuing to expand at a steady rate. There is still a lot of room for growth with Regulation Crowdfunding offerings as they equate to only 1.2 percent of all Regulation D offerings and only 4 percent of all capital raised under Reg D.

The fact that the velocity of capital into funded offerings continues to be steady without signs of abnormal activity or irrational investor behavior is a healthy indicator. Meanwhile, the rapid increase in the number of offerings and investors proves there is continued appetite for Regulation Crowdfunding from both issuers seeking capital as well as investors looking to diversify. This is true across the United States.

Finally, given the high (and improving) success rate for offerings, Regulation Crowdfunding continues to represent a very structured and viable alternative for access to capital for startups and SMEs.

There remains much potential for Regulation Crowdfunding. Not only does it engage local communities to become investors in local businesses, but it provides a viable alternative to traditional finance (i.e. credit card, bank loans and/or venture capital) that may not be available to these firms. The potential for Regulation Crowdfunding may be realized sooner if the $1.07 million cap were to be increased as well as certain recommendations implemented per an industry letter to the SEC, a 2017 U.S. Treasury report, the Fix Crowdfunding Act and the JOBS and Investor Confidence Act of 2018.