When it comes to car buying, many of us already have one foot in the post-dealer era.

A lot of us research, shop, and negotiate our new wheels via online, email, and phone, entering a dealership only to test-drive, sign the papers, and drive away.

Today, a new car marketplace called Roadster is taking that evolution one step further. It is eliminating the car salesman, and recasting the dealership as an inventory lot.

“For a lot of people, the experience breaks down when you set foot into a dealership,” CEO and cofounder Andy Moss told VentureBeat. In addition to launching the marketplace, the company is also announcing new seed funding of $1,750,000.

How the service works

“Most people don’t like the negotiation experience” of dealing with a car salesperson, he pointed out. To avoid that, Roadster essentially acts as your middleman.

On its website, you select and then configure any make and model, with any accessories. The system lets you know exactly what’s available in its inventory of cars, which consists of the cars on the lots of all the participating dealers. Right now, Roadster is only available in California, but it expects to roll out to other states over the next two years.

Because Roadster only sells new cars, “there’s no issue as to which dealer you’re getting it from,” he said.

Then a “concierge” — an experienced Roadster representative — works out the deal for the car you want with the appropriate dealer. Moss said Roadster’s people know all about rebates, incentives, residuals, interest rates, and those other mysteries that go into a car price. In addition to sales, the marketplace also offers leases.

“Our guys are insiders,” he told me, but “we’re not dealer-centric.” 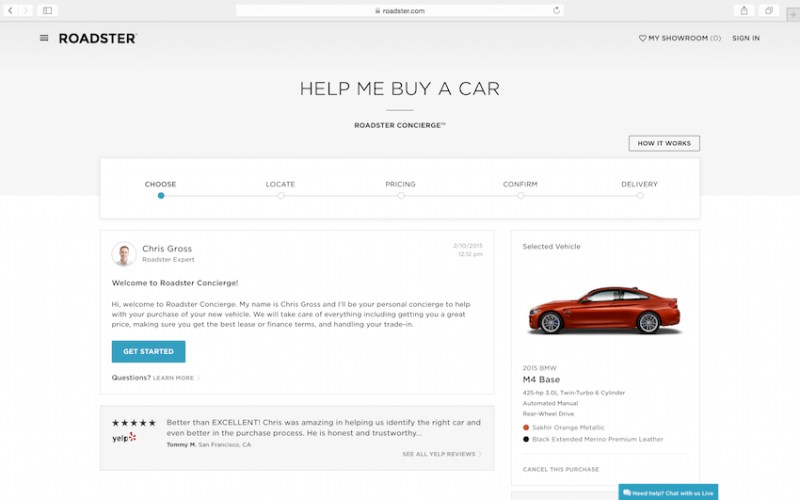 Above: A screen from Roadster

Roadster then presents an itemized list of costs and the final price to you, the buyer.

Once the price is accepted, the customer transmits a driver’s license, insurance card, and credit application. Financing is handled through the dealer in most cases, Moss said, but managed by Roadster.

Moss noted that the dealer is saving by not paying a sales commission. Overall, he said, average savings for the buyer range from $2,000 to $3,000 under the manufacturer’s suggested retail price, plus the additional convenience. He pointed out that the savings can vary quite a bit, depending on the make and model.

Roadster receives a 1.25 percent fee from the dealer. In addition, you pay Roadster a $295 service and delivery fee.

As in, the car is delivered to your door.

If the car you want is, say, in Southern California while you’re in San Francisco, an additional delivery fee of $200 to $300 for flatbed truck shipping is added.

Nothing is charged until the new car is delivered. At that point, there’s a final signing of papers, which Moss said generally takes about 15 minutes.

“And there’s no upsell,” he pointed out, referring to the seemingly endless attempts by the closing salesperson to sell more and more and more.

If you have a trade-in, Roadster can handle that as well. It finds a buyer among wholesalers of used cars, who then resells it at an auction or to a used car lot. The pricing is determined by standard book value, according to photos and your description. The used car gets a short inspection when the new one is delivered.

What if the used car was dishonestly described?

Moss said that, during the private beta phase in October and the public beta since November, none of the trade-ins for the approximately 100 cars bought during that time were misrepresented. If a used car were ever worse than described, he said, the final deal would be delayed.

Generally, he said, Roadster has been able to get $500 to $800 more on a trade-in than a dealer would provide.

If the Palo Alto, California-based Roadster catches on, dealerships may evolve into places whose main function is to store an inventory of cars, and to make some of them available for test drives.

Moss pointed to such competitors as lead generation sites like “the behemoth, TrueCar,” and “big dealer groups like AutoNation that are trying to move much of the process online.” Several startups are providing transactional as well as concierge services for used cars, he said, including Beepi and Shift.

Roadster is doing a similar thing to Beepi and Shift, he said, but for new cars. “We’re the only full, end-to-end provider for new cars, including home delivery.”