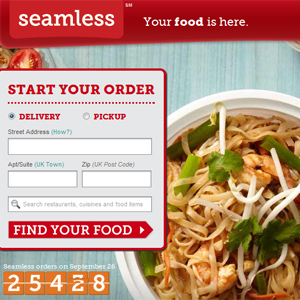 “There is not a more hyper-local market than the restaurant space,” Seamless CEO Jonathan Zabusky told VentureBeat. “MenuPages is one of the most trusted and accurate services for menus, so it will add a lot to our service.”

The biggest thing Seamless will get from the MenuPages deal will be the service’s database of 35,000 menus and 175,000 user-generated restaurant reviews from more than 50 cities around the world.

“We’ve been partnered with MenuPages for two years, so we knew the quality of what we were getting,” Zabusky said. “The companies that MenuPages already has relationships with will definitely be ones we approach in the future about selling orders on Seamless.”

Seamless was formerly known as SeamlessWeb and has done $1.5 billion in sales since 2004. The company expects to complete $400 million in sales for 2011. Seamless generates revenue by taking a cut from each food purchase made through its service — the company keeps a 10 percent commission on average.

MenuPages was sold off by New York Media, which has owned the company since 2008. New York Media will still offer its popular Grub Street food blogs in partnership with MenuPages.