Human, a stealthy Seattle-based startup that won’t disclose details about its audio technology, announced today that it has snagged a $5 million investment.

In vague language, Human said the $5 million will fuel expansion of its 40-person team, which includes former Microsoft, Google, and SpaceX employees.

“There’s been little innovation in audio technology in the past several years,” said Dammeier. “This team has a clear vision and plan to deliver a product that enhances and complements our everyday lives.”

The startup’s LinkedIn page says it will release its technology by this summer, although Human cofounder and CMO Joe Dieter hinted that information about the company may come out in little pieces.

In December, CEO Benjamin Willis told GeekWire that “the company is really on a mission to see technology become more natural, and almost biological.”

For now, Human’s teaser photo (with an unnecessarily nude model) is the closest glimpse we’ve gotten of the company’s technology. 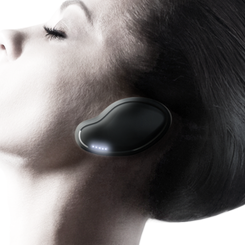 What is that? Bluetooth headphones? Some sort of implant?

“Our investors were interested because the technology encompasses multiple features, a fresh design and may ultimately create a new category of audio.”