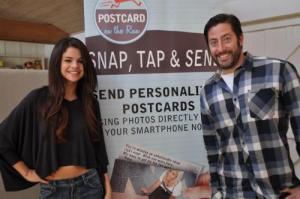 “Ummm im obsessed with the app Postcards on the Run!! I’ve been sending them like crazy lol.”

Selena Gomez, the 19 year-old pop princess, actress and girlfriend of Justin Bieber, tweeted the above approbation for the iPhone application to her 8.3 million followers two weeks ago. Today, she informed the world that she too can play the celebrity investor and advisor part, and participated in Postcard on the Run’s $750,000 round of financing.

Postcard on the Run is a fresh, Los Angeles-based startup with iPhone and Android applications that lets you send real postcards to friends anywhere the world for $0.99 a piece. It has a few hooks including automatic address retrieval and “smell mail,” a feature that lets users add scratch-and-sniff scents to postcards.

The startup, which competes directly with Postagram and Apple’s similarly-purposed Cards app, now has Gomez, a powerful social media socialite — and possibly her even more influential boyfriend by association — in its corner. In addition to her Twitter legions, Gomez has nearly 25 million fans on Facebook. A Facebook update on today’s news nabbed 4,117 likes and 663 comments in four hours. Score one for Postcard on the Run.

The story goes that Gomez found the iPhone application on her own and loved it so much she tracked down founder Josh Brooks in September. The pair continued to chat and talks quickly turned to investment opportunities, Brooks told VentureBeat.

“She’s a fantastic partner for me,” Brooks said. Case in point: A recent tweet from Gomez netted the startup 20,000 downloads in 24 hours, he said.

Gomez joins an ever-expanding circle of celebrity tech investors that includes Ashton Kutcher and Justin Timberlake. Does it also include her super famous underage boyfriend? We asked Brooks if the Biebs was exploring an investment, but we got a “no comment” on that one.