What do you get if you cross a mobile keyboard app with an online shopping mall? This isn’t a joke — you get ShopChat, a new “message commerce” startup that’s this week announcing its launch out of stealth, along with a small round of funding.

Founded in 2016, San Francisco-based ShopChat offers two core products. One is a downloadable iOS app (Android coming later) that serves to replace your default keyboard app and works across all major messaging apps, including  iMessage, Facebook Messenger, and WhatsApp, giving users a direct pipeline into shopping inventory from major retailers. It makes it easy to search for and share products with friends.

The second is a white-label product that third-party apps can integrate directly into their own services via ShopChat’s API.

With the iOS app installed, users can switch between their main keyboard app and ShopChat with a few taps. Rather than letting users pay for things within ShopChat, the app links to the brand’s website for people to buy directly. 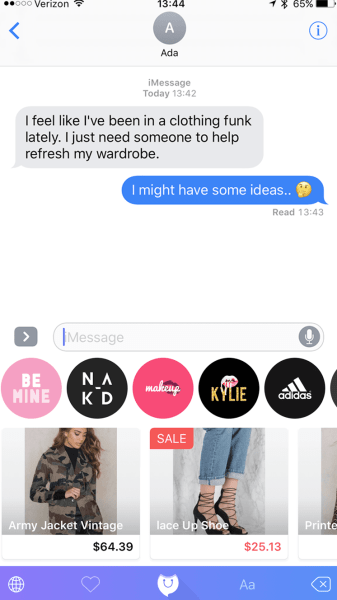 At launch, there are about 60 brands on board, including Sephora, Guess, Foot Locker, Macy’s, GameStop, and PetSmart, though users will generally only see around 20 at any given time. Indeed, ShopChat uses algorithms and “social graph” data to determine which brands and products will show up.

ShopChat quietly launched in the App Store last August, and in the intervening months it has gained around 100,000 beta users through its open invite.

In addition to the formal launch this week, ShopChat has also revealed that it raised $1.25 million from Japanese ecommerce giant Rakuten and a handful of other angel investors from within Silicon Valley and Europe. That Rakuten participated in this round is notable, given that it owns messaging giant Viber. Indeed, a few weeks back, Viber — which claims around 800 million users globally — announced it was introducing a new in-app shopping feature — and we now know that ShopChat’s white-label service is powering it.

It’s true that mobile messaging services are among the most popular apps in terms of time spent, and this is why they’re proving to be fertile breeding grounds for a range of third-party integrations. Messaging apps are much more than simple conduits to chat with friends, they are now customer service portals and test beds for the emerging chatbot revolution. But while bots are still in their infancy in terms of sophistication, people prefer conversing with other people — and this is what ShopChat is seeking to tap into: social commerce.

“No one really wants to talk to a computer, any more than they want to talk to a voice response system,” said Lasker. “That’s been the problem with shopping bots. What people really want is a better way to share products with friends, and to be able to buy right from chat, where they are already spending most of their time.”