The tech world often focuses on how to deliver a better service to millennials. Silvernest chose to address a different age group: baby boomers and empty nesters. These individuals, aged 50 and above, can face isolation and financial difficulties after a divorce or the death of a spouse, which is why Silvernest created an online service to match them with interested renters.

“We’re living longer than before,” said Silvernest cofounder and CEO Wendi Burkhardt, in an exclusive interview with VentureBeat. “By 2030, 132 million people will be over the age of 50 in the U.S., which is twice the size of the millennial demographic.”

Users sign up on Silvernest, list their house or apartment, and get matched with interested renters. They pay a one-time fee of $30, which gives them three months to find a match. If they haven’t found someone suitable during that period, they either get a refund or an extension beyond the 90 days. 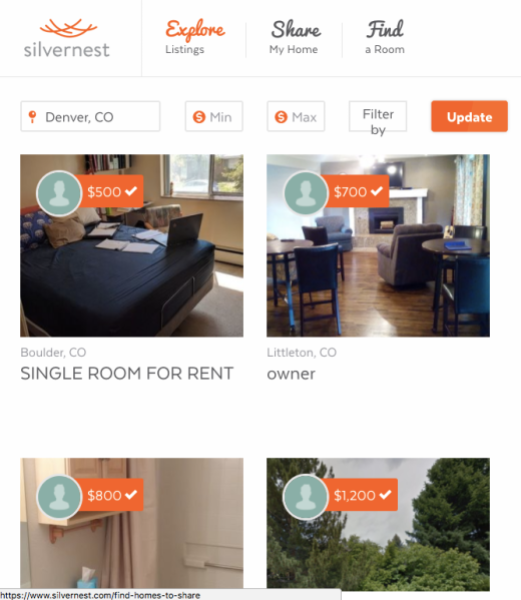 Above: Example of listings on Silvernest

According to Burkhardt, Silvernest has 20,000 people signed up and has made 16,000 matches so far. The service is available in all 50 states, with top markets being Colorado, California, and Florida.

Even though Burkhardt doesn’t view Airbnb as a direct competitor, she does acknowledge that the company has paved the way to a sharing economy. Classified ads and Craigslist are competitors, but Burkhardt claims to offer something these other services don’t: vetting. She adds that Silvernest has implemented a five-point background check interested renters need to go through in order to be eligible.

Burkhardt and her team will use the new funds to further develop their matching algorithm and explore AI. Eddie Thomas, the former vice president of engineering for eHarmony, has joined the company’s advisory board.

Founded in 2015, Silvernest is a graduate of 500 Startups’ batch 18 (Fall 2016). The startup, which initially bootstrapped, chose to return to Denver after participating in the San Francisco-based accelerator program.

“Denver isn’t Silicon Valley but it has a really exciting energy and talent fuelling it,” said Burkhardt. “It’s also more affordable.” She admits that it was initially challenging to find investors outside of Colorado, but the 500 Startups name helped. As a female founder, she also attracted female-led investment firms like Halogen Ventures and 1843 Capital.