Fair, a car-leasing firm that bought out Uber’s leasing portfolio of vehicles earlier this year, has raised a whopping $385 million in a series B round of funding led by SoftBank. Additional participants in the round include Exponential Ventures, insurance giant Munich Re’s Ergo Fund, G Squared, and CreditEase.

The company will use the investment to enable it to “scale its consumer platform and Uber partnership globally,” according to a statement issued by the startup.

Founded in 2016, Santa Monica-based Fair touts its business model as the “future of car-ownership,” with mobile apps and a website designed to make it easy to search for and procure a car within a set budget. The entire process, including signing the lease agreement, happens directly through the app.

The company hit the headlines this year when it emerged that Uber was offloading its entire car-leasing business to Fair. Uber launched Xchange Leasing back in 2015 as a way to get more drivers on the road; however, reports surfaced that the ride-hailing giant was planning to close down the unit because it was losing as much as $9,000 per car.

The companies confirmed in January that Fair would be acquiring the portfolio and associated contracts, with some reports suggesting that the transaction cost Fair as much as $400 million. Fair was in fact well-financed, having revealed a $1 billion debt/equity funding round the previous October from notable investors including BMW and Mercedes-Benz.

Fair and Uber have maintained a close partnership in the intervening months. Fair now targets Uber drivers with specific plans that include routine maintenance and roadside assistance, and Uber drivers can actually log in to the Fair app with their Uber credentials. 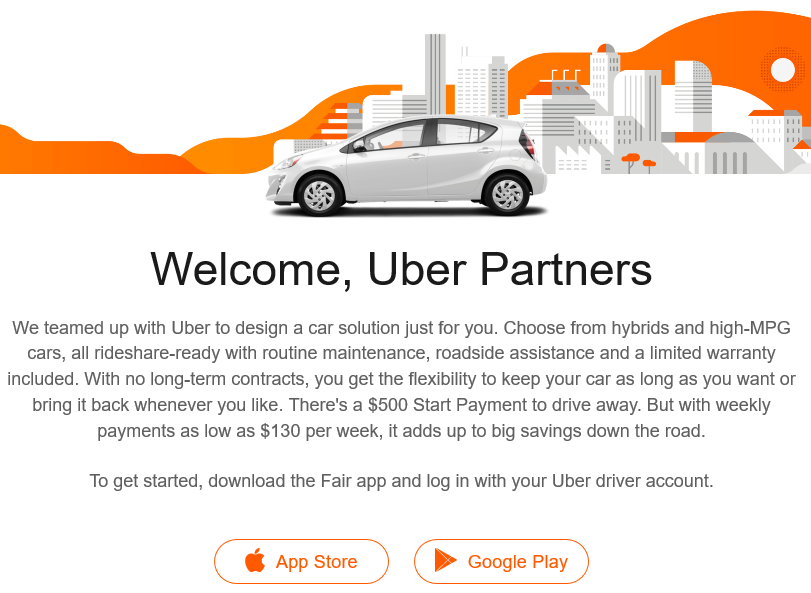 Above: Fair and Uber

Since its launch in August 2017, Fair said, it has provided cars to more than 20,000 users through 3,000 dealer partnerships in the U.S. The company has now raised more than $400 million in equity funding in the past year, including a $50 million round in February, and with its latest cash injection it will now gear up to bring its Uber tie-up to more markets around the world, in addition to launching its consumer business.

“We’re in the midst of a transformational shift as consumers choose access to services over ownership,” noted Fair CEO and founder Scott Painter. “This financing signals that Fair will be a critical and enduring component of this transition in mobility as we replace the decades-old, debt-based system of car-buying with a payments platform that’s simple, affordable, and flexible.”

The used car marketplace sector is big business, with the likes of Vroom recently closing a $146 million funding round and Shift raising $140 million. Fair, of course, is a slightly different proposition as its product is pitched more as a shorter-term “no commitment” service involving pre-agreed monthly payments, even though in reality it can be used for longer term “ownership” style leases.

“Fair provides a simple and affordable way for people to get access to a car for personal use, ridesharing, or carsharing,” added Lydia Jett, senior investor at SoftBank Investment Advisers. “This investment will enable Fair to provide cars on a global scale, and help reduce the barriers to mobility.”