Spotify’s stock soared today after making its hotly anticipated and highly unusual debut on the public markets. The $165.90 opening price of the stock valued Spotify at around $29.5 billion, well above its most recent valuation of $19 billion.

The New York Stock Exchange (NYSE) issued a reference share price yesterday of $132, translating into a valuation of $23.5 billion. This wasn’t an official offering price, but served as a guide for Spotify’s eventual pricing, which was set by the market maker ahead of trading.

The stock sale represents a major milestone for a company that pioneered the shift away from sales of digital downloads toward subscription-based music streaming. But in choosing to make a direct listing rather than pursuing a more traditional initial public offering (IPO) of stock, Spotify took an enormous gamble.

With the number of IPOs stagnating in recent years, the tech industry will be watching the performance of Spotify’s stock in the months ahead to see whether its move should be duplicated or avoided by other overvalued unicorns searching for some kind of exit. While a direct listing saved Spotify millions of dollars in banking fees, it also meant that the company itself did not raise what could have potentially been billions of dollars for its own use.

With Spotify continuing to lose money, it certainly could have used that cash as it faces rivals such as Apple Music, which has been growing rapidly since its launch in 2015. Unlike Spotify, Apple Music faces no pressure to be profitable while having almost unlimited corporate cash to invest in its service.

Spotify sparked big speculation when reports first emerged last May that it planned to carry out a direct listing on the stock market, effectively bypassing the traditional IPO process. The tech and investor communities had eagerly speculated on how, when, and where this unusual listing will take place.

In June 2017, the New York Stock Exchange (NYSE) made a request to the Securities and Exchange Commission (SEC) to alter its listings standards so as to accept direct listings. The SEC approved this request in February, which is lucky for Spotify, as it had already confidentially filed documents with the SEC at the end of December.

In summary, Spotify started trading at $165.90 under the ticker name SPOT on the NYSE. 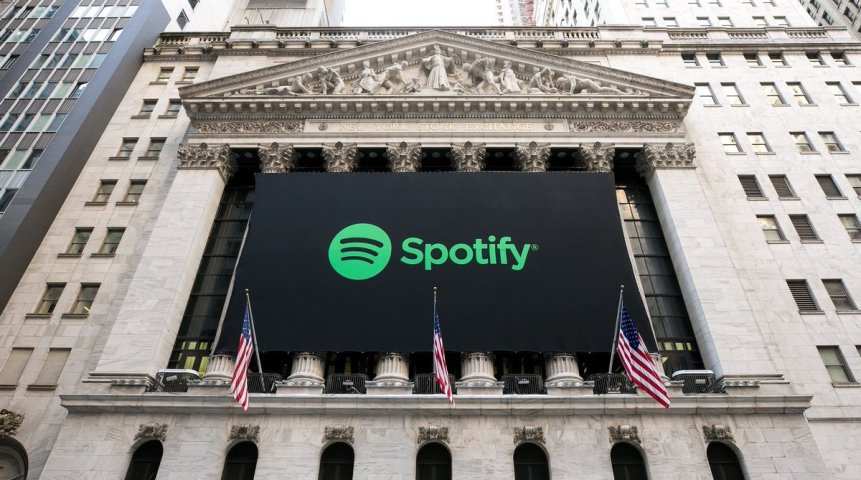 Above: Spotify on the NYSE

Why choose a direct listing?

By choosing a direct listing, Spotify is breaking away from the traditional IPO process so many other tech unicorns have chosen to take.

One advantage to a direct listing is being able to bypass the costly underwriting fees of investment bankers involved with pricing the shares. The Wall Street Journal reported that Alibaba paid $300 million in bankers’ fees. Facebook paid $176 million, Snap ponied up $98 million, and Twitter spent $68 million.

Banks that advised Spotify throughout its process — Goldman Sachs, Morgan Stanley, and Allen & Company — are therefore losing out in this deal.

Another reason to choose a direct listing over a traditional IPO is to avoid a dilution of shares resulting from newly issued stock. In a traditional IPO, the underwriters gauge new investors’ interest throughout the pre-IPO period or “roadshow,” which gives them an indication of how to price the shares. The newly issued shares are then sold to new investors on the exchange to raise capital.

Bypassing this process is risky, however, as there is no period of price discovery or equity research from the underwriting banks, which can open shares to price volatility. What’s more, Spotify has not raised any new capital through this process.

Typically, a company chooses the IPO route to raise money. Snap, for instance, raised $3.4 billion in its IPO last year. Facebook raised a whopping $16 billion, which it was then able to use to buy Instagram and WhatsApp. So even though Spotify says it doesn’t need the money, it is still losing out on the chance to rack up billions of dollars, which it may need down the line to compete with giants like Apple.

A final argument in favor of the direct listing is liquidity, which is music to the ears of every investor and employee. In a traditional IPO, there is a certain lockup period (usually 180 days) during which existing shareholders aren’t allowed to sell their shares on the public markets, which effectively delays the “cashing out” process. With a direct listing, however, everyone can start selling shares on day one of trading, at least in theory (this depends on the shares’ restrictions).

Bloomberg recently reported that Spotify cofounders Daniel Ek (CEO) and Martin Lorentzon (vice chairman) own a class of stock that assures their hold on the company after the shares begin trading. These dual-class structures have been used by other tech giants, like Facebook and Snap, and have been criticized by the SEC as unfair to other shareholders.

Spotify: the road to (no) IPO

Spotify’s path to today’s public listing has been 10 years in the making, if we begin with the company’s launch and first major institutional funding way back in 2008. That $21.6 million series A raise, while modest by today’s standards, was actually a significant chunk of cash when you consider the following: Spotify was a European startup that had yet to launch, and it was going up against mighty music-tech incumbents such as Apple with a novel “access over ownership” model.

After two years of development, Spotify officially launched in a handful of European markets on October 7, 2008, alongside a swathe of “groundbreaking licensing deals” with labels that included Universal Music Group, Sony BMG, EMI Music, Warner Music Group, and Merlin. 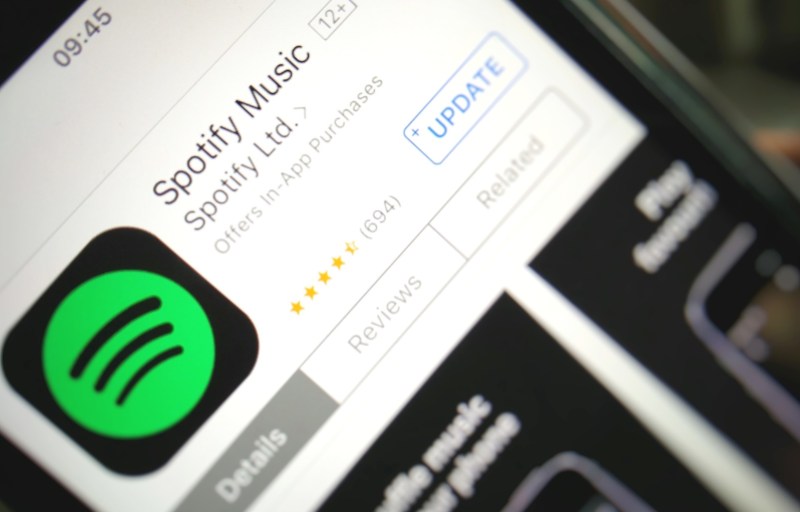 In the early days, Spotify managed the growth of its platform by making its free ad-supported tier available on an invite-only basis, meaning users who had found their way onto the free tier could invite their friends to join them. This was similar to the way Google managed its initial rollout of Gmail a few years earlier. However, Spotify also introduced its premium access tier at the time for those willing to take a punt on the fledgling platform.

Fast-forward five months, and Spotify had notched up its millionth user. By September 2009, it had graduated from the desktop and onto smartphones with its first mobile app for iOS and Android. However, the big news came two months after that, when Spotify was made available on Nokia’s Symbian platform, which then dominated the smartphone market with more than 50 percent market share. Yes, a lot can change in 10 years.

The company later went on to raise $1 billion in debt in March 2016 in a deal that stipulated investors could convert the debt to stock during the public offering at a 20 percent discount. However, the longer Spotify waited to go public, the bigger that discount grew, while the interest rate on the debt has also increased over time.

All in all, Spotify has raised well over $2 billion in funding, including equity and debt. As a private company, it was valued at about $19 billion.

Sandwiched between all this money-raising, Spotify expanded globally into nearly 70 markets, including the U.S., where it has plied its trade since July 2011. Spotify now claims 73 million paid subscribers globally, adding 10 million new subscribers on average every five to six months. Its overall user base is more than 168 million, and the company recently revealed that it expects its paid-to-free user ratio to hit 46 percent by the end of 2018.

Taking nearly 10 years from its first institutional raise to enter the public markets is a long time. For context, Twitter took around six years from its first equity raise to IPO; Facebook took a little under eight years from when Peter Thiel first plowed $500,000 of his own money into the social network in 2004; and Snap took less than five years. Blue Apron, another of 2017’s tech IPOs, also took around five years to get from first funding to IPO.

Spotify’s near-decade long journey to going public isn’t unprecedented — Dropbox recently went public after nearly 11 years — but it is indicative of how carefully it has considered the timing of this step. Rumors circulated last year that it had been planning to IPO in 2017; however, it became clear that Spotify wanted to improve its balance sheet before wooing public markets. The company has also had a rocky relationship with the record industry over the years, and so it has set about building bridges with artists and record labels leading up to this transition.

Many artists and record labels would still like Spotify to ditch its ad-supported free tier altogether, but the company has always maintained that the best way to onboard new paying users is to let them initially access the service for free (with some restrictions). As a compromise with the music industry, Spotify started renewing licensing deals last year with major and independent record labels that would allow them to limit new album releases to premium subscribers for the first two weeks.

With Spotify now gearing up to become a hardware company and likely compete with the likes of Amazon, Apple, Google, or all three, it will need all the capital it can get, although it won’t benefit financially from this IPO at first. If things go well, however, it could decide to pursue a secondary offering at a later date, which could be used to fund its battle against its rivals.

This is the first time a big tech company has carried out a direct listing. A niche group of large public real estate investment trusts (REITs) and biotech companies, including OvaScience and BioLineRx, have done direct listings on Nasdaq. But this was a first for a large private company, and a first for the NYSE.

OTC Markets, an operator of public markets that provides liquidity and trading for over-the-counter equity securities, also does a type of direct listing, which it refers to as a “Slow PO.”

“In contrast to the traditional IPO process, a ‘Slow PO’ through OTC Markets enables companies to enter the public markets by making previously restricted shares available for public trading by brokers on the OTCQX, OTCQB, and Pink markets,” said Jason Paltrowitz, OTC Markets Group’s executive VP of corporate services, in an interview with VentureBeat. “The Slow PO is akin to a ‘direct listing’ on an exchange, where a company goes public without raising money and without underwriting as in a traditional IPO.”

Examples of companies or institutions that have opted for this direct to market route include the Bitcoin Investment Trust and various community banks.

Google had also chosen an unconventional framework for its 2004 listing on Nasdaq, opting for a version of a Dutch auction — in which a company accepts bids and then auctions off the shares. This did not prove successful for Google, however, as it ended up pricing below its target and lost millions of dollars.

Going public is risky no matter how you do it, which is why so many tech unicorns — like Uber and Airbnb — are choosing to remain private for now. But if this direct listing proves to be successful, traditional IPOs could soon become a thing of the past. Either way, Spotify will be remembered for it.