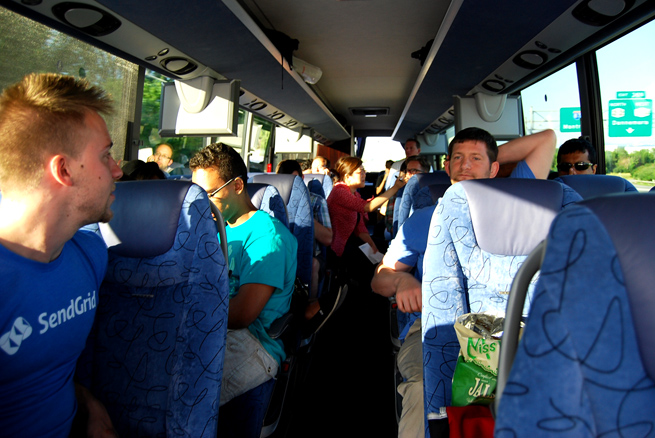 It’s 11 p.m., I’m drinking a can of Molson, and the bus passengers are finally quieting down as we get closer to New York City, where we departed two days ago. Many founders from promising early-stage startups from around the U.S. are sitting beside me as a type, trying to make sense of the past two days.

Let me back up for a second. On Wednesday morning, we took off for Montreal’s International Startup Festival, where the founders of these 14 startups got the chance to meet mentors, investors, and grandmas. To get back and forth to festival, the startups decided to brave a 7-hour bus ride on the “DOer Express” that was sponsored by well-funded developer-focused startups Twilio and SendGrid.

Twilio and SendGrid (with a little help from Microsoft) paid for the bus and hotel rooms for the startups. I suspect the two companies are doing this as a chance to develop potential paying customers in the future, but also get these startups to spread the gospel of SendGrid and Twilio. SendGrid says it’s an opportunity to give startups a chance they might not otherwise get and to build the community.

“This was organized because there are a bunch of startups — not just in New York, not just in San Francisco — and they don’t have the capital to tell the world how awesome they are,” Mike Swift, developer evangelist for SendGrid, told VentureBeat. “It’s a classic underdog story. These are people who didn’t get the chance, a lot are bootstrapped entirely. These people deserve it, and a lot of people don’t get that.”

The 14 startups on the bus were:

• ConnectCubed – Helps you get a job in the finance industry.
• CredoHealth – Private video chat between patients and health care professionals.
• FashionProject – Helping people donate clothes and earn money for non-profits.
• Fiestah – One-stop shop for party planning, including caterers and photographers.
• General Machines – Its Deatfel product hooks up the hard-of-hearing to others via phone.
• Gokrt – Online shopping cart for any site around the web.
• Kunvay – Easy way to transfer and receive ownership of creative work online.
• Review Trackers – Helps you monitor online reviews of your business or product.
• SlideSeed – SaaS that lets you create digital signage for you storefront.
• SplitWise – Helping you split your expenses smartly with friends and family.
• Tosigram – Making Terms of Service or Privacy Policy language easier to understand.
• Thryve – iPhone app that helps you eat healthier, not just count calories.
• Travtar – Travel search that compares hotels, hostels, short-term housing, and more.
• Wedgies – Simple online and SMS polling that can be spread via social media.

During the ride, each company above had the chance to give their pitches to everyone on the bus. Some had pitches with extra polish, while others stumbled over their words. It was a great chance to see people with different levels of skill and confidence about their products and services.

While in Montreal, the startup bus’ 30 or so passengers used their two days to see the city, eat unhealthy amounts of delicious poutine, and network like crazy. For companies that were from New York, it made sense to hop on the bus to scope out the Montreal scene, as well as see fascinating and funny speakers dole out inspiration.

“We wanted hear people’s feedback on our company,” New York-based Fiestah co-founder and COO Nurul Yahya said. “When you’re a startup, it’s a good thing to connect with other startups. When you go to a networking event, you get 5 minutes. Here, I’m on two six-hour bus rides and meeting 13 other startups.”

Other startups came from further away and paid for flights to get a spot on the startup bus, including San Francisco’s Gokrt and Las Vegas’ Wedgies. In Gokrt’s case, the company’s founder wanted to get advice and see how people would respond to his startup outside the Bay area.

“The thing about San Francisco is that it’s amazing for startups, but there is a lot of other stuff out there,” Gokrt founder Justin Johnson said. “It’s hard to leave it, but I’m happy to go to other events and connect.”

In the case of Wedgies, the company’s founders are fulfilling their “master goal of giving the entire world a Wedgie.” For them, it’s not only about creating “wedgie evangelists” but also telling the world about the Las Vegas tech scene.

“We made a lot of great new friends in Montreal and on the bus,” Jimmy Jacobson, CTO of Wedgies, said. “Being friendly to people close to you is more important than pitching people you have no connections to. We’re meeting people that normally wouldn’t have been available to us by being nice to everyone around us.”

During our journey back from Montreal, SendGrid purchased a few cases of beer to make the ride a bit more fun. But it wasn’t so much a party as it was a reflection period and a time to collaborate. People pulled out laptops and showed each other business plans, designs, and more, using each other as soundboards for success.

As the startup bus got closer to Manhattan, we could see the New York City skyline briefly. In the early hours of Saturday morning, the startup founders pop up from their half-asleep state and are ready to be finished with the journey. Consensus from talking with the riders suggests they are better off than they were two days ago, thanks to meeting other people that can become a support network for their dreams.

SendGrid’s Swift jumps on the microphone one last time to as we drive into the city to pass on encouraging words to the DOer Express:

“Stay in contact — there’s this thing called e-mail and you can circumvent the distance. I hope you got something out of it and got to refine your pitch. You had the chance to come up with this idea, and you know you’re building something awesome. The important part now is getting data points. Hopefully this was a chance for you to figure it out. Keeping doing what you’re doing.”