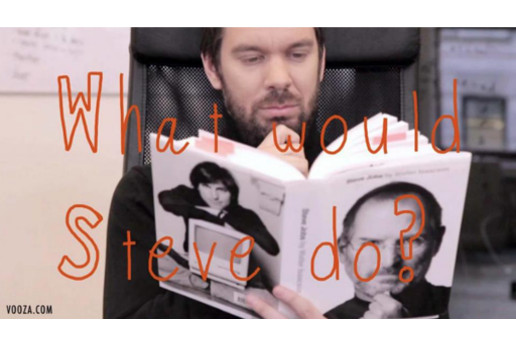 Listening to startup people speak can either be exciting and inspirational… or it can make you do a little gag. It’s hard not to poke fun at self-righteous entrepreneurial types that pepper their language with buzzwords and act as if they got their Ph.D. in passion – so here’s our pick of the best startup spoofs.

If you know a couple of people who need an idea for their startup, or some confused founders who are ready to pivot – you should direct them to Nonstartr, a pitch generator. Because who knows, maybe your cool startup friends will give you some eProps for inspiring them to build the next Airbnb for puppeteers and picnics.

3) When you work at a startup

Okay, we get it – working at your startup has a bunch of cushy benefits. But it’s not all beanbags and motivational posters, at least not according to this Tumblr, which reveals a more realistic snapshot of daily startup life in typical internet fashion – the animated GIF.

4) Startup is the New Hipster

Although this comparison between Hipster (left) and Startup (right) – which was first posted in the epoch before iPhone5 – is a little dated, this must-see graphic is one of the earliest virtual records of the startup-hipster association. And in case you’re still unsure about the dichotomy, make sure to read this list. 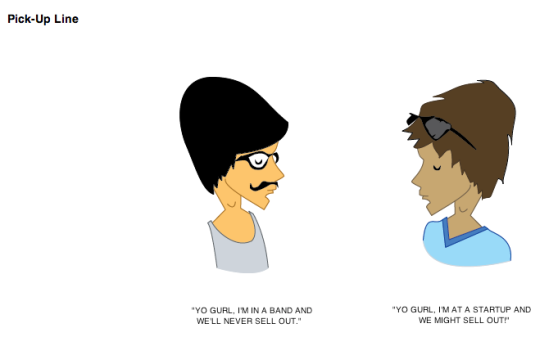 Lucky for us, we’re *always* in the loop with the latest startup trends and entrepreneurshipismness. How? You might ask.

Well, my young padawan, mostly because the Startup Hipster –  founder, CEO, BBC and WC of “eBay for minerals” startup Dirtdig – has given us all the tools on how to out-cool our peers with startup lingo, office decor and style.

There are now almost as many Lean Startup fanboys as Steve Jobs worshippers out there… So we couldn’t resist a pair of Xtranormal animated bears saying lines like “my market is junkies who can’t survive six hours without my product or their brains implode” and “if you want to be a lean startup ninja pirate rockstar like me, you have to employ continuous agile scrum customer development iteration to drive market development”.

Because you’re probably friends with a few (or 12) of them.

This sh*t isn’t even funny – it just made our ears bleed. The next time we hear an entrepreneur describe their startup as “It’s like product X, but for market Y” or say the word pivot, we’re going to stare them silent and show them this GIF, which we saved on our phone specifically to respond to those situations.

It’s unfortunate that we live in a world where 6,561 people have funded an Indiegogo campaign (run by Gawker) to acquire a video of Toronto Mayor Rob Ford smoking crack cocaine and 1131 people have supported a Kickstarter campaign for a book by a Fake Grimlock – imagine if we used the combined total of $234,941 for something that actually mattered?

The latter is slightly more justifiable, but only because the Fake Grimlock – a giant robot startup dinosaur that has contributed to VentureBeat, The Next Web and ReadWrite – is on a mission: “TO DESTROY SUCK ON INTERNET, REPLACE WITH AWESOME!”

So you wanna create your own startup spoof? Hint: Do the opposite of everything that you see in this First Round Capital Holiday Video that’s supposed to be a “Rebecca Black Parody”. From the clipart-y intro to the pencil sketch video filters that we didn’t even know people used to contrived group dance sequences, we’ve cringed more watching this “parody” than we did watching the Exorcist.

What are your favourite startup spoofs or entrepreneurial pet peeves? Let us know in the comments below…

This post originally appeared on VentureVillage, one of VentureBeat’s editorial partners.