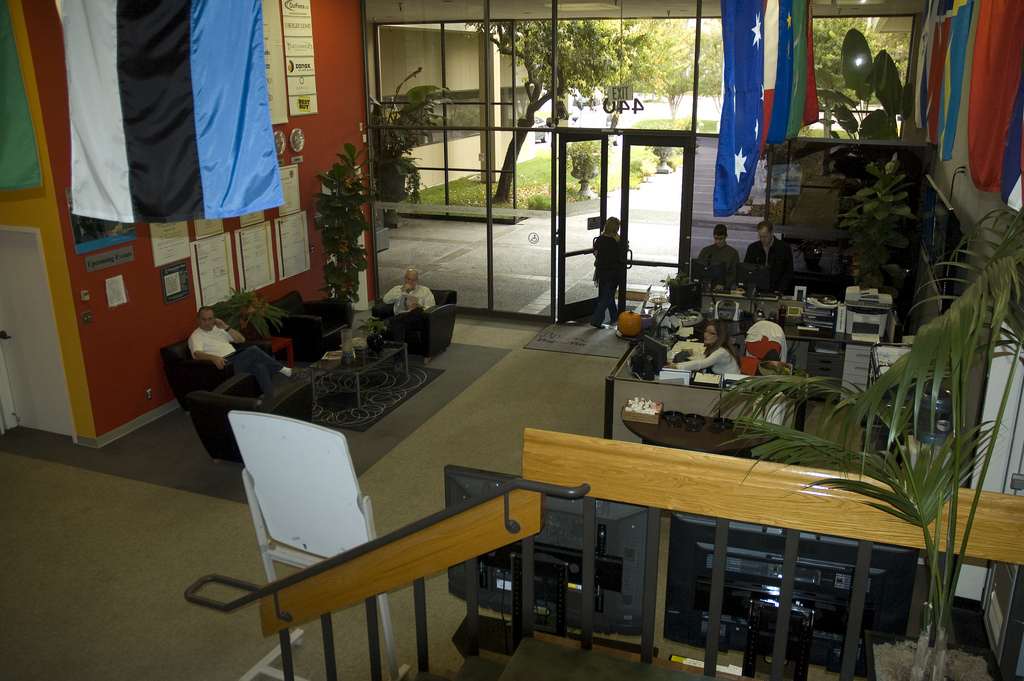 SUNNYVALE, Calif. — Walking into the Plug and Play Tech Center for the first time, I feel like I am at the United Nations of startups. Flags from around the world hang from the ceiling, and the hum of accented voices fills the building. Approximately 1,000 people come through the Sunnyvale campus every day, and today even more will arrive for the Plug and Play accelerator Expo event, where 25 companies are presenting what they’ve been working on.

The building formerly housed a Philips Semiconductor complex, but it’s now packed with cubicles for entrepreneurs, partners, and mentors. Founder Saaed Amidi is an Iranian exile who moved to Silicon Valley and started out by leasing office space to companies like Google and PayPal, which became one of his first angel investments. He started Plug and Play in 2006, and since then the organization has grown into an international network that has accelerated 1,200 startups, which have collectively raised $1.4 billion in venture funding. Last year, it made 62 investments and is focusing heavily on international entrepreneurs.

“I have been traveling and traveling, and now is a really good time to invest in abroad,” said Aimidi on stage. “There is great talent, great entrepreneurs, and right now [it’s] much easier to have your people in Spain and your [chief executive officer] here and build great value. The main objective of Plug and Play is to be a platform for our investments.”

The accelerator model is particularly useful because it provides foreign entrepreneurs with SV mentorship, connections, and resources that would otherwise be difficult to tap into. Fellow accelerator maven Dave McClure is also making a big push to create an international network for startups. He has set up funds for Mexico and India and organizes Geeks on a Plane, a global tour for startups, investors, and executives.

Plug and Play has set itself up as a home base for international entrepreneurs. At today’s demo event, about half the participants are foreign. The panel of judges is made up of Josh Goldman of Norwest Venture Partners, Gary Little of Morgenthaler, Michael Goguen from Sequoia Capital, and Lars Leckie of Hummer Winblad.

Here are the companies pitching today:

SEO Engine has created a patented, more transparent search engine that companies can use to bring them data that will help optimize their search. Home Depot, Dell, McAfee, YP.com, Apartments.com, Hawaiian Airlines, and Omnicare are all current clients. Founder Scott Stouffer said that moving up in Google search rankings is now an opaque and complicated process — and one that’s up to the whims of Google.

“We rip away layers of distortion and get brands back to the core data,” he said on stage. “We help them take back control of their own destiny. This is the moment when Google’s reign of terror over big brands came to an end.”

Social Code is a health startup that helps patients adopt and maintain positive habits for chronic disease prevention and management. Its platform combines social media, mobile technology, tracking tools, gamification, and data analytics to keep patients on track with their treatment. Founder Siobhan Bulfin said that 148 million Americans a year suffer from chronic disease, adding that this is the No. 1 cause of preventable death and disability in the U.S. He also said that 65 percent of patients don’t adhere to their medication, which perpetuates this cycle. Bulfin said patient engagement is the solution.

“We want to be the go-to patient engagement platform in the world,” said Bulfin.

Social Code makes it easier for patients to remember to take their mediation and provides social incentive to stay on track. It also opens up communication with their physician. Bulfin started the company after her sister when through breast cancer. She wanted to create a way for her to connect with supporters, fellow patients, and care providers.

Mobile Event Guide is a mobile-app solution for large events (similar to Bloodhound) that helps attendees navigate the chaos using personalized planing tools, real-time event updates, and networking opportunities. It was founded in Berlin in 2009 and now has more than 40 employees. It makes money by connecting advertisers with additional ad opportunities and is building a U.S. presence.

BlueFox has created an “iTunes” library for digital outdoor signs. Digital signs are increasingly common, but companies need dynamic, relevant digital content to put into them. Creating or buying this type of content can be expensive and challenging. Bluefox has built a place where clients can easily pick-and-choose the content they want. The French company powers the content in signs in airports, trains, subways, and stores.

“I am sure everyone in their life has seen BlueFox,” said USA CEO Guillame de La Tour. “If not, you are blind.”

Appfuel is a “business plan in a box” for mobile-application studios. It helps mobile-gaming companies with distribution and monetization by providing a display advertising network that updates in real time. Customers can adjust how much focus they put toward promotion and user acquisition or how much they put on monetization, depending on traffic. CEO Andrew Boos said many mobile-game developers/entrepreneurs don’t know how to get users into their mobile-gaming apps or monetize them effectively. Companies like Chartboost, Applfied, Tapyjoy, and Flurry help acquire users, and there are a host of mobile-ad networks. Existing solutions often focus on one or the other, but Appful helps with both.

IDXP helps offline businesses analyze their customers’ behavior by tracking shopping paths in real time. It uses this information to provide insights into how that business can drive sales. There is a huge market for “big data” technology that helps e-commerce startups optimize their sites. However, a majority of shopping still happens offline, and IDXP wants to bring this sort of analysis to physical retailers to maximize sales per square foot. It was nominated by IBM as global entrepreneur of year in 2012.  Clients include Walmart, Carrefour, and Tamoil. Euclid is a competitor that recently raised $17.3 million in its second round of funding. It provides “Google Analytics for the real world.” Cofounder and CEO Gustavo Lemos said they are growing fast and want to continue working with big brands.

Cloudtenna supplements enterprise file storage with a cloud service so you can browse files from mobile devices. IT departments can use it to add access to files stored on existing company storage. The BYOD movement has a lot of momentum right now, but a lot of enterprise organizations are struggling to adapt their workflow to this new mobile world. CEO Aaron Ganek said people have new ways they want to access files, and the old file servers don’t support those new devices. While competitors like Box and Dropbox have comparable solutions, Cloudtenna does this “without disrupting existing file access.” He said it is 20 times faster than Box and far more secure.

FLASHiZ provides a mobile checkout solution that integrates payment and a retailer’s loyalty and rewards within the transactions using QR codes. It integrates with POS systems, mobile apps, banks services, vending machines, and other systems to help businesses set up mobile payments. Founder Nicolas Vilmart said mobile payments are the next big wave in finance, and this solution makes it as easy as possible for businesses to set those up. The French company first deployed its solution in Europe by integrating with POS providers and then approached the merchants. It has already raised $2.6 million in Europe and is now tackling the U.S. market.

Pulse.io is building technology to make mobile apps run faster. Founder and CEO Ofer Ronen described it as “a stethoscope monitoring your app.” He said that when an app loads or updates slowly, it frustrates the user and leads to an overall bad experience. Pulse.io built an iOS SDK that seeks out issues and choke points and notifies developers to respond accordingly. Ronan sold his previous company Sendori to IAC. The company will enter beta this summer, working with The Weather Channel, LinkedIn, Flipboard, and FourSquare to improve their app’s performance.

ProTenders wants to be the “LinkedIn” of construction. Founder Karim Helal said his goal is to help construction projects find the right person at the right pricing for specific jobs. The system lets construction companies put their “tendering” process online with tools for document collaboration and online bidding and automatically generates interactive reports. Helal said that so far, they have transacted $12.5 billion of bids while the industry is going down. It is based in the Middle East and looking to enter the US.

Atizo is a crowdsourced platform for market research. Market research is slow, expensive, and it can be tough to get real information. Atizo is a community of 20,000 people that provides feedback on ideas to give marketing managers actual insight into whether a new product will succeed The company has run over 200 projects with over 150 customers from multiple sectors. Founder Chris Hirsig said that Kickstarter is useful for companies just starting out, but this same principal can be used for existing brands to test the waters for new products.

Tickengo is a mobile platform that encourages ride-sharing with a focus on airports. The company basically provides a Lyft or a SideCar approach to getting to airports. You order a ride through your phone, and a peer comes and picks you up in their car. Founder Geoff Mathieux said that super shuttles and public transportation are not convenient, but cabs to airports are expensive, and ride-sharing is more focused on getting around within city limits. Mathieaux said the startup is starting at LAX but thinks it can set up shop in every airport in the world.

JD Sound has created a portable DJ system. President Robin Lee said that it is the world’s first and only truly mobile and truly standalone DJ mixer and music production device. Its like a Jambox for DJing — the hardware is small, lightweight, and cheaper than existing DJ system. The company is Korean, and appropriately Lee and CEO Hans Kim demonstrated the technology with a rendition of “Gangam Style.” JD Sound already has license agreements with LG and Philips, and more big box retail partnerships are in the works.