Market research is an age-old method of garnering feedback from consumer target markets. Today, it’s estimated to be a $45 billion global industry.

As with many long-established business building tool sets, the internet and connected devices now play a big role in how market research is conducted. Surveys, for example, can be distributed through email, SMS, messaging apps, and websites, among other online channels — this makes it easier to achieve scale than traditional offline formats involving clipboards and pestering members of the public.

It’s against this backdrop that Streetbees was founded in 2015, serving to let companies gather feedback from consumers on the ground through their smartphones.

Available for Android and iOS, Streetbees pitches itself as a “global intelligence platform that reveals how people behave.” It does so through asking users to carry out tasks such as answering questions and taking photos and videos of places and products around them. This is packaged in a chat-style app, with questions posed conversationally. 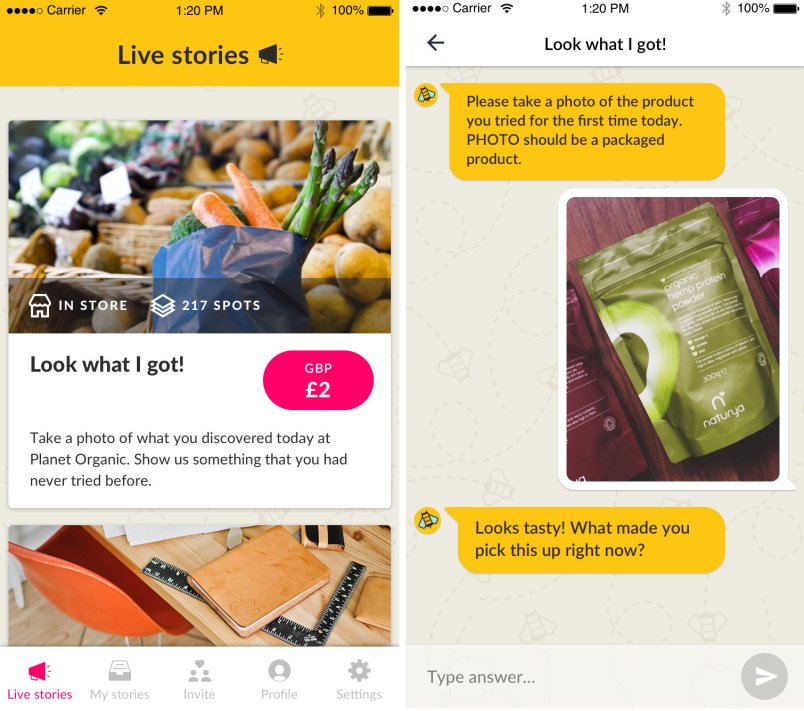 Above: Live stories and chat interface

Today, the company announced a $12 million series A round of funding led by Atomico, with participation from existing investors including LocalGlobe, Octopus, and BGF Ventures. This comes less than a year after the London-based startup closed a $5.1 million seed round, and with another chunk of cash now in the bank, Streetbees said that it will double down on its machine learning smarts, which automatically transform data it gathers into “actionable insights” for brands. Additionally, the money will be used to grow its team in London and push out into the U.S., where it opened its first office in January.

Why would anyone wish to download an app and participate in consumer surveys? It turns out that if you offer money, people are more than willing to give it a go. Streetbees claims it has more than 1 million users — who are referred to as “bees” — in 150 countries, and they’re promised payment in exchange for tasks.

The signup page gives some examples of what you can expect to be paid:

– £10 for taking a one minute video while you make tea;
– $5 to say what you think of your mobile network;
– ¥45 to take a photo at your local supermarket.

Impressively, the company’s website also states that one “bee” made more than $1,800 in a single day.

The reality, however, is a little different. It turns out that not all surveys are paid — a fact that has drawn a few complaints from some who have downloaded the app and left comments in the app store reviews.

Historically, more Streetbees surveys have offered payment than not, though the company has added more non-paid surveys recently to “make sure that people regularly engage with the app and that there is more content available,” according to a spokesperson.

So what is the likelihood of earning $1,820 in a single day, as one “bee” apparently did? Well, as it turns out, pretty much zero. When probed by VentureBeat, this figure was for what it calls an Ambassador, and they do far more than respond to surveys. Ambassadors help spread the word, get people to sign up, carry out translations or transcriptions, run social media campaigns, and so on. They’re not employees as such, but they’re certainly edging into “internship” territory.

In terms of how much a typical “bee” can earn in one day, it may range from $1 to $50 depending on your country, number of surveys, and the exact nature of the tasks you’re asked to carry out. But conceivably you could go days or weeks without being offered a paid survey, and even then you may not earn all that much. And that is one potential issue the platform could face: disappointment.

The onboarding process leans heavily on the concept of “we’ll pay you for answers,” but in reality it appears few will be making big bucks out of this. However, the company is betting on achieving true scale by tapping the seemingly insatiable desire among smartphone users to share “things” from their lives. Much in the same way as people love broadcasting pictures of their coffee or cat to the world through social media, Streetbees hopes that this urge to share will work in its favor through connecting brands with consumers, who can also earn a little pocket money for their troubles.

The conversational facet of the interaction feeds into this, and is built very much with the WhatsApp generation in mind. But more than that, Streetbees doesn’t have to manually converse with or sift through data. It uses natural language processing (NLP) to work through the results, and then strives to understand what the consumer does and why they do it. All in real time.

“Human behavior is too complex to standardize and understand with multiple-choice questions and automated analysis, but this is what most research groups dish up time and time again,” noted Streetbees CEO Tugce Bulut. “International companies need deep insight into unique drivers of human behavior to be able to understand their customers and grow into new markets. Streetbees captures the detail within people’s lives at scale and analyzes it, helping companies both understand the bigger picture and act like an innovative startup that has intimate knowledge of local markets.” 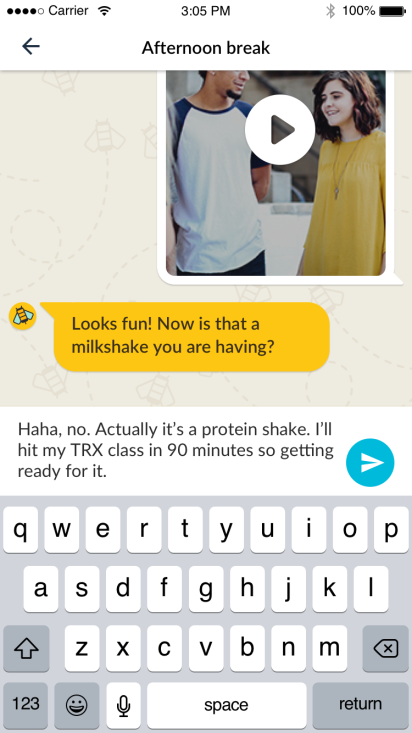 Surveys typically take less than 10 minutes to complete, and usually consist of between 10 and 20 questions, with an upper limit of 30. Unpaid surveys usually constitute less than six questions, and any surveys requiring the user to capture photos and videos will normally have fewer questions.

A real-life example survey from one of Streetbees’ clients runs as follows:

-Take a photo of the snack you are eating, making sure we can clearly see the front of the pack AND any other snacks you are having with it

-Please make it as clear as possible what you are eating. Show the brand(s)

-Looks interesting! Please describe what you are eating, including the product name and brand

-Where are you eating this?

At home
At someone else’s home
At work
In a store
In a cafe / restaurant
Out and about
Other:

-Are you sharing this snack with anyone?

No, it’s just for me :)
Partner / Spouse
Friends
Parents
Children
Colleagues
Other:

-Which best describes how you acquired this snack?

-What are the main reasons that you wanted a snack today? Please be as detailed as you can

-Why did you choose to eat this specific snack today? What did you want from it?

Streetbees’ competition is pretty much other market research companies, including Kantar, TNS Global, and Ipsos Mori. And the basic idea itself is not too dissimilar to something like Google Opinion Rewards, which doles out Google Play Store credit to those willing to participate in quick surveys. However, Streetbees goes beyond that to garner rich-media feedback from consumers, underpinned by machine learning technology that can automate the processes and analysis of traditional market research methodologies. And that, perhaps, is why it claims some big-name clients in the form of Vodafone, Unilever, Pepsi, L’Oreal, and BBC World Service.

Additionally, snagging one of Europe’s premier venture capital firms as lead investor is a major scoop by the startup.

“Traditional market research is slow, rigid, and expensive, costing brands $44 billion globally every year to produce consumer insights that are often woefully out-of-date by the time they are delivered,” said Atomico partner Carolina Brochado. “With Streetbees, we have found the world’s first real-time technology-enabled customer insights platform — giving brands dynamic responses, from real customers, for a fraction of the cost and time taken by traditional incumbents.”

Streetbees currently employs 75 people in London and Lisbon, and with a big wad of money now at its disposal, it plans to grow its data science team and push its service specifically in the U.S. via its recently opened office stateside. However, the company has the world in its crosshairs, and its platform will hold particular value for brands wishing to carry out market research in developing markets where it may be more difficult to reach through traditional means.

“Companies fail to invest in the developing world time and again because they don’t understand the market, as they either can’t find the information they need or they don’t trust what they have,” added Bulut. “By giving them a far better solution that provides local detail and real insight into what people across the world do and why, Streetbees can enable major investment in nations where it might otherwise not occur — potentially fueling economic growth where it is needed most.”