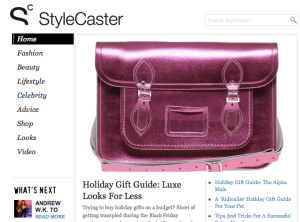 StyleCaster’s main web site, Stylecaster.com, and its social channels offer news and features related to style, fashion and celebrities, and the company focuses intently on fostering conversations around those topics. Stylecaster.com and sister site Beautyhigh.com, attract more than 2 million uniques visitors per month, and the company sells ads through other blogs as well.

“It’s not all about the Anna Wintours of the world,” StyleCaster CEO and co-founder Ari Goldberg told VentureBeat. “Anyone who wants to have a voice in fashion can do so through StyleCaster.”

StyleCaster will likely become profitable this year, Goldberg said. The next step for the main site will be a strong re-design that will go live early in 2012. It will also “unveil a proprietary and exclusive take on commerce.”

The addition of Van Natta and Ko to StyleCaster’s list of investors will almost certainly draw more attention to the company. Former MySpace head Van Natta stepped down as chief business officer from Zynga earlier this month and reportedly gave up millions of pre-IPO shares in the social games company. Ko has been helping Zynga transform mobile gaming with popular games like Words With Friends, CityVille, FarmVille and Zynga Poker.

The new funding round was led by previous investor Dan Gilbert, founder of Quicken Loans and owner of the Cleveland Cavaliers. Other participants in the bridge round include Mike Keriakos, President of Everyday Health; Abbey Doneger, President of Doneger Group; Jamie Driver, Managing Director of Morpheus Media; Joel Perlman, President of Copal Partners; and Josh Linkner, CEO of Detroit Venture Partners.

“We’re honored and humbled that we were able to get such high-quality investors involved in our business,” Goldberg said.

StyleCaster has now raised a total of $5.5 million, including the new round.