San Francisco-based startup Remind has no revenue to date. But that hasn’t stopped the secure broadcasting app for teachers, students, and parents from landing a new $40 million round on top of a previous $19 million.

Of course, there’s the traffic.

“We broke into the top three apps in the [Apple] App Store,” CEO and co-founder Brett Kopf told VentureBeat. “To my knowledge, this has never been done for an educational app.”

He also said that Remind, which was launched in August 2011, has held the No. 1 spot in the education category for six weeks in the App Store and in Google Play. And it is “adding 200,000 new users daily.”

“Right now,” he said, “we have a million teachers and 17 million students and parents.”

Using Remind, teachers get a code, such as Math1, and only students in that class or on that team have access to the communications. Teachers can post homework reminders, photos, documents, or other class-oriented communications to that code, or coaches can use it to let a team know that they have canceled a practice. A voice message can also be recorded and sent out.

A student’s phone number does not go out, and this is the app’s appeal. When asked, students or parents can respond to a teacher’s query with a check or an x, such as answering a multiple-choice question.

“We don’t allow 1-to-1 messaging,” Kopf pointed out, but message groups of three or more are possible, such as two parents and their child or three students. 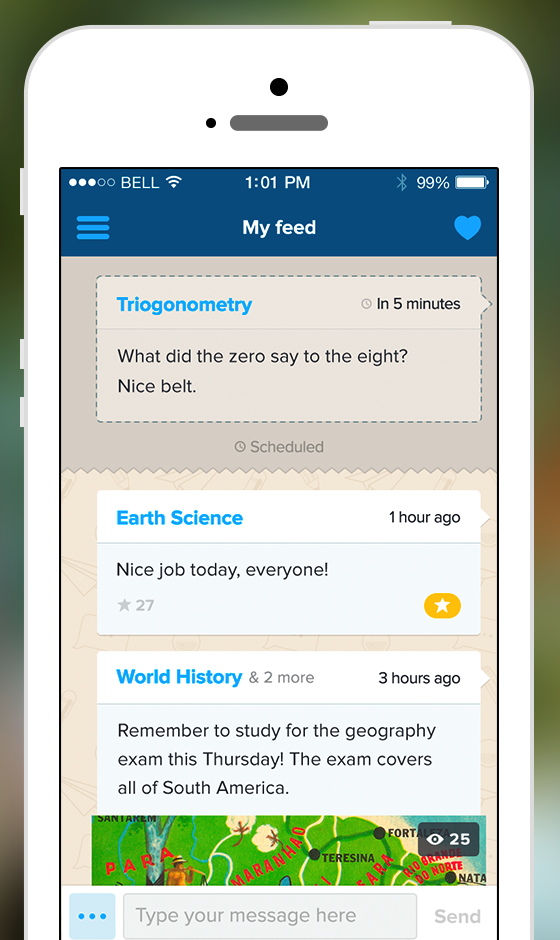 Remind is targeted at grades K-12, although he noted that since few elementary students have phones, it is primarily used in those grades to communicate with parents. Students who have phones might have feature devices instead of smartphones, in which case SMS text messages go out. An email option is also available.

With many students already using web-based bulletin boards set up for their classes and schools, why employ an app focused on mobile devices?

Kopf said “there’s a shift in the ecosystem” toward mobile devices. “It’s the way students like to communicate,” he said, “on a simple lightweight phone.” Teachers have told him that, if only 50 percent or less of their class can access the messages, they won’t use Remind — but Kopf said there are few such cases.

Will this become a vehicle for ads?

Kopf said he has told teachers that Remind “will not become a platform for advertising.” As for revenue sources, he indicated only that the company will eventually add unidentified premium features.

Which is how the new money will be spent — on international growth, building out the product and engineering team, and improving the support team.

Competitors include Google Classroom, Kopf told us, adding that he doesn’t consider that broad set of services as a competitor. There’s also Edmodo, but it is focused primarily on web-based communication, not mobile.

The new Series C funding round was led by previous investors Kleiner Perkins Caufield & Byers, The Social+Capital Partnership, and First Round.