Last year, we estimated that 80 percent of the tech startups likely to go public in 2013 sold their software to businesses, not consumers.

Our prediction proved accurate, with enterprise companies dominating the markets this year. Business-to-business (B2B) companies don’t capture the same attention as their consumer counterparts, but investors perceive them as a safer bet.

With the year drawing to a close, we asked CB Insights, a firm that compiles data about private companies, to send us a short list of the top performing exits of the year. Not surprisingly, the vast majority of them were enterprise companies — with a notable exception, Zulily. To compile its ranking, the firm’s analysts look at the most capital-efficient venture-backed tech exits by “value creation ratio” (valuation at the time of exit divided by the total amount of funding received prior to exit).

What surprised us most is that Twitter, far and beyond the most hyped IPO, didn’t make the cut. That’s because the social network raised a little over $1 billion in funding prior to its IPO, which valued it at $18 billion; by contrast, Veeva, an enterprise company that went public in the same week, raised just $7 million, and that’s all it needed until it reached IPO at a valuation of $2.4 billion. 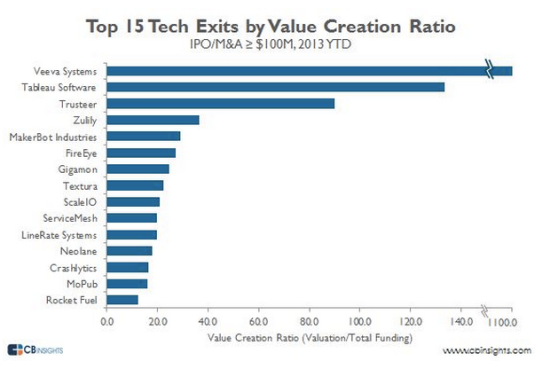 According to CBInsights, the top 15 tech exits by value creation raised just $471.5 million, but these saw a combined IPO valuation of just over $18.5 billion. That’s going to make multimillionaires — if not billionaires — out of their earliest investors. The most impressive was Veeva Systems, which raised most of its funding from a single investor, Emergence Capital. That company made a strong debut on the public markets, selling nearly $261 million in stock Tuesday at an initial valuation of about $2.4 billion. 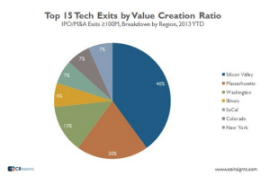 The study also found that the majority of this wealth flowed back into Silicon Valley. About 40 percent of the companies on the list are based in the Bay Area, while Washington saw two of the exits (Zulily and Tableau). Massachusetts also notched three of the top 15 tech exits by value creation.

Why is this tech stock so sought-after on Wall Street? Let’s take a closer look at the top three companies that went public this year.

Veeva Systems: The next Salesforce

The ugly duckling award goes to Veeva, a cloud company that no one paid attention to until it crushed its IPO. Veeva was founded by former Salesforce exec Peter Gassner and Matt Wallach, a general manager focused on pharmaceuticals at Siebel Systems. The pair boast decades of experience in the life sciences — useful if you’re selling cloud-based software to the leading drug companies.

In 2007, the company took a paltry $4 million in funding from Emergence Capital, a venture firm which specializes in vertical investments.

Above: Demand for Veeva stock has fallen in recent weeks.

Emergence was founded by Gordon Ritter, who invested early in Salesforce. After raising some $7 million in total, Veeva was able to expand its sales and marketing team. By 2010, the company reached profitability, and at the time of its public offering, it had netted an impressive $27 million in profits. That was enough to propel it to an IPO that sold $261 million in stock Tuesday at an initial valuation of about $2.4 billion — one of the most remarkable launch-to-exit paths we have ever seen.

The moral of the story? Focus is key. Veeva has proven that companies can make big money selling exclusively to one type of customer. It also helps to build a team with vast connections and expertise in this sector. Read more about Veeva on VentureBeat. 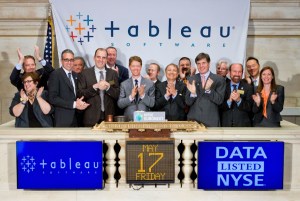 Above: Tableau’s team ringing the bell at the New York Stock Exchange.

Data visualization company Tableau filed for a much-anticipated IPO at the beginning of the year. The company experienced a strong public offering, raising some $254.2 million at the $31/share price (after raising that IPO from an initial range of $23-26) at a valuation of $2 billion. The newly public company continues to show promise.

It operated with the simple promise to help customers “see and understand data,” so it’s a cute touch that the ticker symbol is DATA. Its stock has nearly doubled since its IPO in May.

Above: Demand rises for Tableau stock over the past six months.

Tableau offers products that everyday people can use to make rich and interactive data visualizations and charts. It’s perceived by the industry as one of the fastest-growing analytics tools, and it’s a threat to giants like Microsoft Excel.

Most impressive of all is its growth: After receiving venture capital twice in its nine-year history — both times from NEA — totaling $15 million, Tableau reached $127.7 million in annual sales in 2012, more than double 2011 revenues and more than quadruple 2010 revenues. That’s a compound annual growth rate of 93 percent. Read more about Tableau on VentureBeat.

Zulily: The next eBay 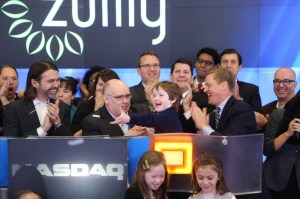 Above: Darrell Cavens of Zulily with his son and early employees, opening trading on Nasdaq.

When Zulily went public in November, we described it as a “watershed moment” for e-commerce. That’s because this was the first successful IPO in years from a company that sells products online to consumers.

Zulily raised $253 million in its IPO at an initial valuation of more than $2.6 billion.

Similarly to Veeva, Zulily is focused on one type of customer. In this case, it’s parents and children. The company sells daily deals and flash sales to this group. The strategy seems to be working, as moms are a highly lucrative market. Zulily has made ample revenues in the past few years, recently turning a small profit.

In 2014, we could see a burgeoning investment in e-commerce, a direct result of Zulily’s success. Read more about Zuiliy on VentureBeat.

If you thought 2014 was a strong year for tech IPOs, 2014 could get far more interesting! The very latest study from CB Insights has identified 590 venture capital and private equity-backed companies that have estimated valuations of $100 million or more — that’s up from 472 last year.