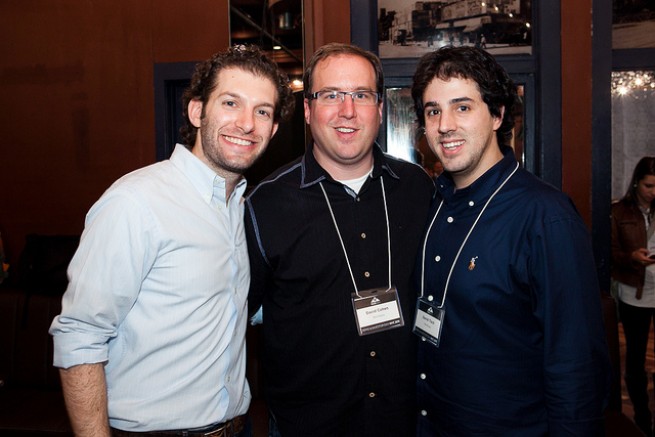 Above: Adam Rothenberg (left) with David Cohen and David Tisch

“The thing I remember about Adam was that he was always there,” says Caren Maio, founder and CEO of the real-estate startup Nestio. One night Maio was freaking out about finances when Adam Rothenberg, director of Techstars NY, wheeled his chair over from a nearby desk.

“I had to do my taxes, I had to draw up my P&L to potential investors, the really hard part of being a startup. He had the financial background and was just really instrumental getting our books together, that first time startup stuff that can really hurt you if you don’t do it right,” sayd Maio.

TechStars announced its third class in New York city today. The startup incubator, first started in Boulder, Colorado, puts young companies through a three month boot camp where they polish their idea, structure a business, and form ties with mentors and investors. It’s often compared to Paul Graham’s Y Combinator in San Francisco, except that TechStars takes a franchise approach, with programs in cities around the nation.

The New York program, which was launched in 2010, has graduated 23 companies so far, 21 of whom have raised a total of more than $50 million in venture capital funding. 14 companies will be joining the new class, hoping to follow in the footsteps of successful graduates like Crowdtwist, OnSwipe and Coursekit.

When Rothenberg arrived at TechStars, fresh out of a stint at a local hedge fund, he was quiet. “I don’t mean this as a put down, but Adam did the administrative stuff. When he first got there it seemed like he was soaking it all in, just making sure the trains ran on time,” says Irving Fain, CEO of CrowdTwist.

It was David Tisch, the avuncular scion of a legendary New York family, who became the public face of TechStars, on a reality show about the program that aired on Bloomberg TV. “They balance each other out,” says Irving, “David is this ball of energy and Adam is very low key, very consistent.”

For the three years before he joined TechStars, Rothenberg was with Zimmer Lucas Partners, a long/short equity hedge fund on Madison Avenue. “He was very bright, really a pleasure to work with,” said Louis Shamie, a director at Zimmer Lucas who worked on the same research team with Rothenberg, “But over time you got the sense that looking at the same dozen or so companies in a very specific, mature industry couldn’t keep him interested, even though, in the short term, he could have done very well financially.”

His colleagues in finance were a little mystified by his choice of TechStars. “We are used to looking at companies that are publicly traded, where you can point to hard assests. That is the model Adam learned out of college, the nitty gritty understanding of how, ‘much is this piece of steel on the ground worth?’” said Shamie. “Techstars is much more about investing in an idea, trying to imagine where people will be a few years down the line.”

Rothenberg’s girlfriend, Jessica Kreps, works in sales at a Manhattan art gallery. “We both thought it was a risk, moving from finance into this new program that not many people in New York had heard of,” Kreps told VentureBeat. “The first time I visited it seemed kind of like a summer camp for grown ups, all these young people drinking beer and playing ping pong.”

But while he was quiet and in the background at first, as Rothenberg became more comfortable with the mentors and startups, he proved himself as a valuable connector. “He was very good at matching us with mentors and heping to get that first client in the door,” said Maio.

The three month program at TechStars is a whirlwind ride for many startups. Some have to come up with a business, find talent and raise funds at the same time. “He was really good at getting a read on investors. He would come up to you and say, ‘I think this is how your should approach them,’” said Irving.

In fact Mr. Rothenberg is an active investor himself, partnering with Mr. Tisch in the BoxGroup, which has backed startups like Fab, Groupme, and Boxee. I met with Rothenberg in a Greenwich Village cafe, on a rainy Manhattan morning. Like his boss David Tisch, he has long, curly brown hair and an unshaven mug.

“I’m really excited about this third class,” he said, sipping coffee. “We went ahead and made some asks in terms of mentors I don’t think we felt confident doing the first time, and we have folks like Eric Hippeau, Seth Godin and Esther Dyson advising the TechStars companies.”

The stakes are higher for this new class of companies. In September, the program changed its offering to each startup from $18,000 to $118,000 after raising a $24 million fund. The Bloomberg reality show turned the incubator into a well known, and closely watched, breeding ground for hot startups. But Rothenberg says he has no plans to step out into the spotlight. “If everyone thinks TechStars is a one man show, that’s fine with me.” he told VentureBeat, sipping his coffee. “I’m in this for the long term. When I was working in finance, we were dealing with mature companies. Now I get a chance to interact with early stage teams, where my advice can make a big difference. I’m excited to see how that plays out.”