Since SparkLabs Global Ventures launched 20 months ago, we have made 50 investments across five continents. We have six partners, based in Silicon Valley, Seoul, Tel Aviv, Singapore, and London, which gives us a unique viewpoint on what is trending in terms of technology and innovation across the globe.

To find this top 10, we looked at eight factors: Funding Ecosystem & Exits, Engineering Talent, Active Mentoring, Technical Infrastructure, Startup Culture, Legal & Policy Infrastructure, Economic Foundation, and Government Policies & Programs. We aren’t releasing the specific category scores until later this year since we are expanding this list to at least 20 cities. But for the first time we are revealing the cumulative scores (out of a total possible 80 points) with specific rankings: 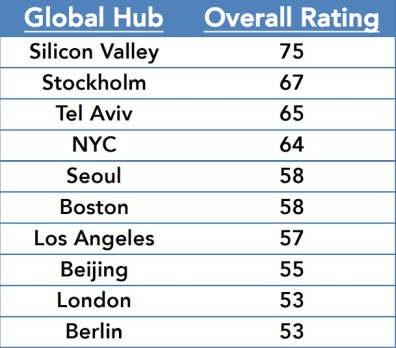 Probably the most important factor on this list is a soft factor — “active mentoring” or a “pay it forward” culture. This has been cited numerous times as the “secret sauce” of Silicon Valley and why its startup environment is so difficult to replicate. Even if you drive a few hours south to Los Angeles, the business culture is worlds apart. People tend to guard their contacts and rolodexes more than the free-sharing culture of Silicon Valley.

This is also a reason why we focused on urban ecosystems and cities, not countries, because the startup cultures between two cities in the same country can be night and day.

We included Legal & Policy Infrastructure as a factor because basic steps, such as company formation, can be a huge barrier to entrepreneurship. In Greece, the entry cost to form a company is 60,000 euros ($68,000)! How can this not be a factor that impacts the country’s economic health since it has policies that greatly hinder startup formation and eventually job creation and growth? I would rate Athens a “1” on a scale of one through 10.

U.S. cities rated a 10 out of 10 on Legal & Policy Infrastructure because of the ease of creating a company and the generous bankruptcy laws that are cited as a driver for entrepreneurship.

Seoul, South Korea rated 5 out of 10 since there are still laws that could hold a CEO personally liable if a company becomes bankrupt. There isn’t as clear of a separation between corporate liability and personal liability as in the U.S. We half jokingly commented to each other, while putting together the analysis, that if these laws were in the U.S., Silicon Valley might only have half the number of startups it currently does.

For Government Policies & Programs, we gave London a 7 out of 10. The U.K. has programs to encourage angel investing, such as income tax relief of 30 percent for up to £1,000,000 per year (EIS program). In Seoul, our affiliated startup accelerator is part of a government matching program for venture capital funds where a $100,000 investment received a matching grant of $500,000. There are various other programs initiated by President Park’s “creative economy” initiative for South Korea, which is why we gave Seoul a 9 out of 10.

With this updated analysis, we wanted to show how many “unicorns” there are in each of these global startup hubs. Any city that doesn’t have any unicorns would have a hard time breaking our top 10.

This category’s ratings weren’t only about unicorns but also about the overall exit climate. What is the exit potential of a startup in that city? How many $50+ million exits did it see? How many $100+ million exits and $500+ million exits? Even though Tel Aviv (or even Israel overall) doesn’t have many unicorns (even historically and not just after our 2010 cutoff), it has had many exits over $100 million. We gave it 7 out of 10.

Also this category is not just about exits but the overall funding ecosystem. There might be great base for seed-stage investment activity, but many cities in the world lack Series A funding to create a robust startup ecosystem.

For this year’s analysis, we compared funding trends in North America, Asia, and Europe, and within U.S. metro areas. The overall venture capital activity at the top levels has been close between the U.S. and Asia, with Europe lagging behind.

The three largest rounds of Q2 2015 in North America have been:

The three largest rounds of Q2 2015 in Europe have been:

The three largest rounds of Q2 2015 in Asia have been:

Even with a market downturn, we are excited about the continuing innovation and startup activity across the globe. A sharp downturn will have a stronger effect on the weaker startup ecosystems and those overloaded on consumer facing products, but the stronger ecosystems we believe will continue to produce “unicorns” and successful companies.

Bernard Moon is cofounder and General Partner at SparkLabs Global Ventures, a new global seed-stage fund, and cofounder of SparkLabs, a startup accelerator in Seoul, Korea. Follow him on Twitter.