If you run a tech company and want to expand abroad, how do you choose where to go?

An established industry cluster with skilled people, good financing options, supportive regulations, and an attractive city to live in would be ideal, especially if you want to attract talent. If it’s a country that’s open to innovation, and where a high proportion of the population has access to the internet and mobile phones, even better.

My team at the Economist Intelligence Unit has long published a ranking of business environments around the world based on 91 questions about the operating environment in each country. This year, we have put together a new Technological Readiness Ranking based on a similar approach.

The results? Of the 82 countries surveyed, Australia, Singapore, and Sweden ranked as the best places to invest in the next five years, if you consider tech readiness an important criterion. These are followed by the US, Japan, Finland, and a handful of other countries in Europe, notably France, Germany, and the Netherlands. The top-scoring developing countries, meanwhile, are Malaysia and China in Asia; Bulgaria and Ukraine in Eastern Europe; and Costa Rica in Latin America. Here are the top 10 (see the full list of country rankings at the bottom of this post):

The EIU ranking is put together by assessing eight indicators across three categories. The first category is access to the internet, which is gauged by data on internet usage and mobile phone subscriptions. The second category covers the digital economy infrastructure, looking at the quality of e-commerce, e-government and cyber-security offerings in the country. The final category, openness to innovation, considers patents granted, research and development (R&D) spending, and the research infrastructure.

Some countries stand out for specific strengths. For instance, the Netherlands has the best e-commerce environment, the UK has exemplary e-government services, and Taiwan is the world leader for cybersecurity. Others have particular quirks — such as the extremely high number of mobile phone subscriptions per person in Hong Kong, which is reputed to be one of the most smartphone-friendly markets in the world. Government priorities are key to the ranking for R&D spending. Here Israel and South Korea lead the field, spending over 4 percent of GDP on R&D per year — well above the averages of 2.8 percent in the US, 2.1 percent in China, and 2 percent in the EU. 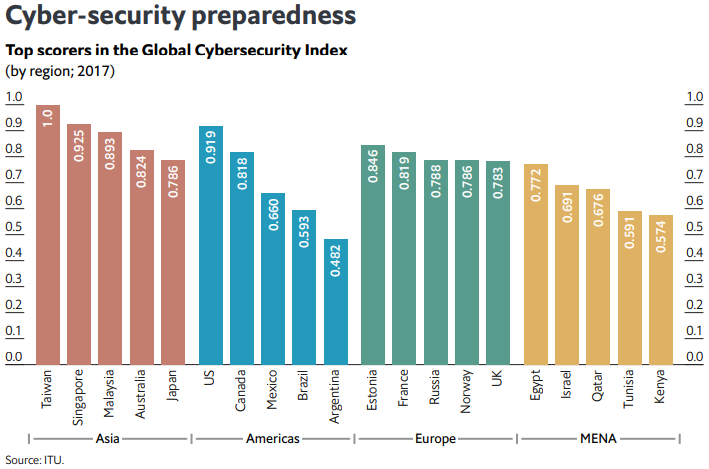 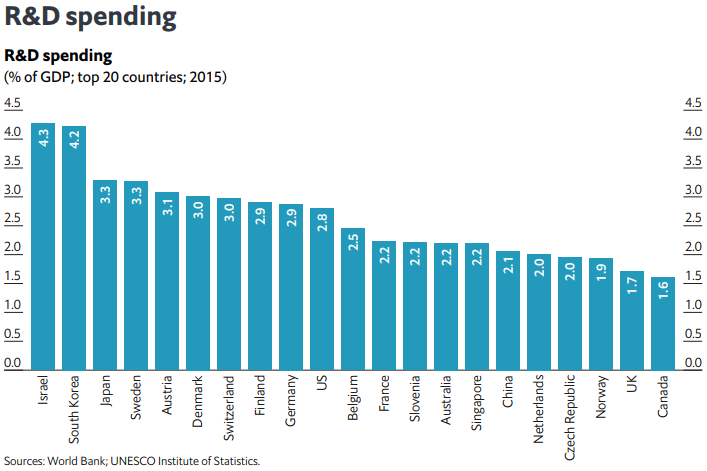 Most countries can expect to see their scores improve in the coming years. One example here is the US, which will rise up the rankings as internet connectivity is progressively enhanced. The US will also remain the world leader for innovation clusters and new patents, followed by Japan. However, the biggest changes in this area are in China, where applications for patents are soaring (albeit mostly for domestic rather than international filings), and Shenzen-Hong Kong and Beijing are becoming increasingly dynamic innovation clusters. 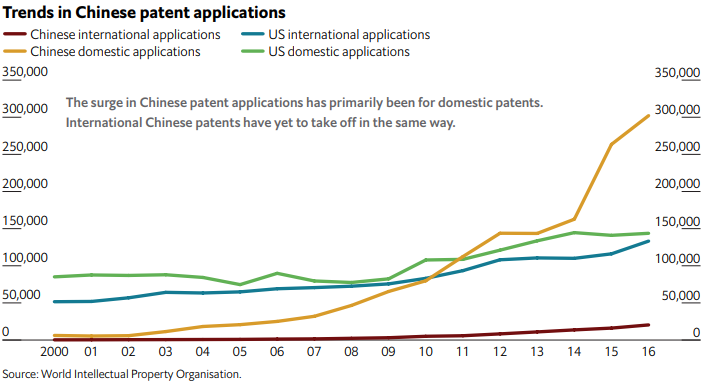 Although e-government may not sound like the most important criterion from a business perspective, it can shed light on other issues, particularly in some of the more high-growth, high-risk countries of the world. Most importantly, countries with good online government services tend to score well on measures of transparency. Because it typically reduces the number of interactions with officials and speeds up the decision-making process, the quality of e-government is negatively correlated with corruption. 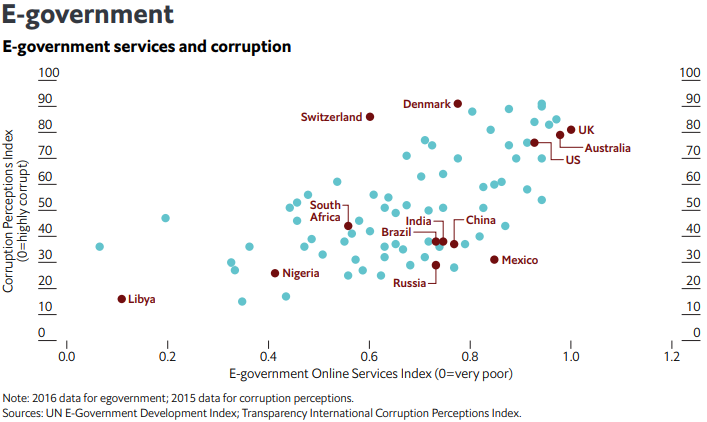 Finally, measures of internet usage give an insight into a country’s demand for digital services. About half of the global population had access to the internet in 2017; by 2022 this will have risen to three-quarters. With broadband penetration already high in the West, most of this growth will come from Latin America and the Middle East, mostly thanks to private-sector investment. Meanwhile, consumers around the world will become increasingly reliant on their smartphones. In India around 80 percent of internet usage now takes place on mobile phones, and in Africa m-commerce accounts for the bulk of online sales. 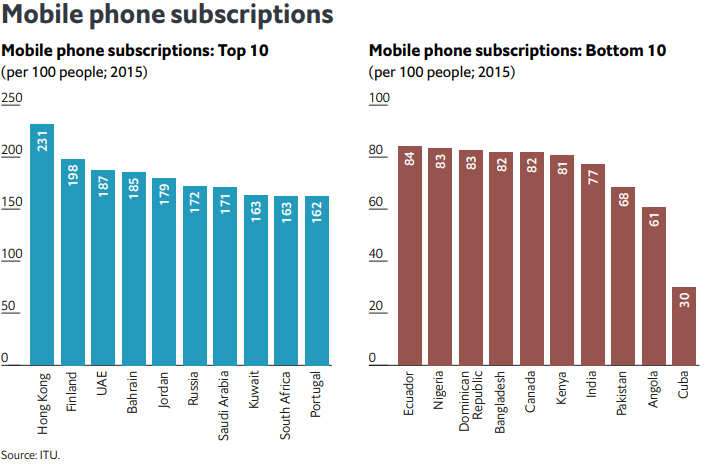 Which country you choose to expand into will ultimately depend on the specifics of your industry. Nonetheless, as a primer on how well prepared countries are for technological change, how open they are to innovation, and how ready they are for the next waves of digital disruption, this ranking is a good place to start.

Here is the full list of 82 countries we ranked according to tech readiness: 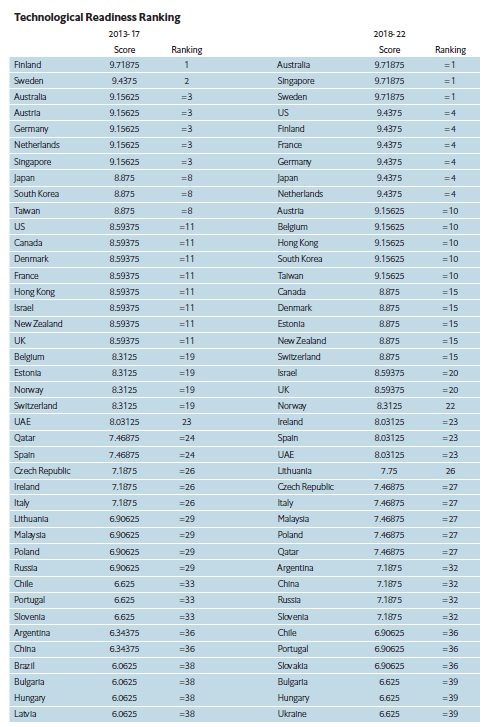 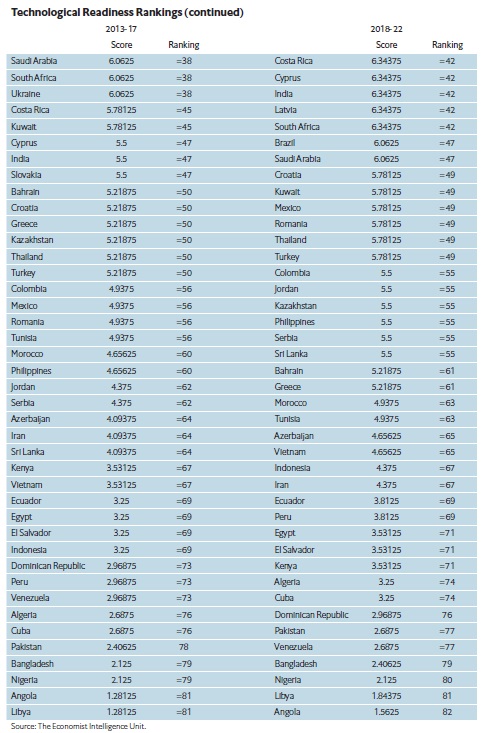 Emily Mansfield is the Director of the Country Forecast product at The Economist Intelligence Unit. She produces the Business Environment Ranking and is the author of the new report Preparing for disruption: Technological Readiness Ranking.